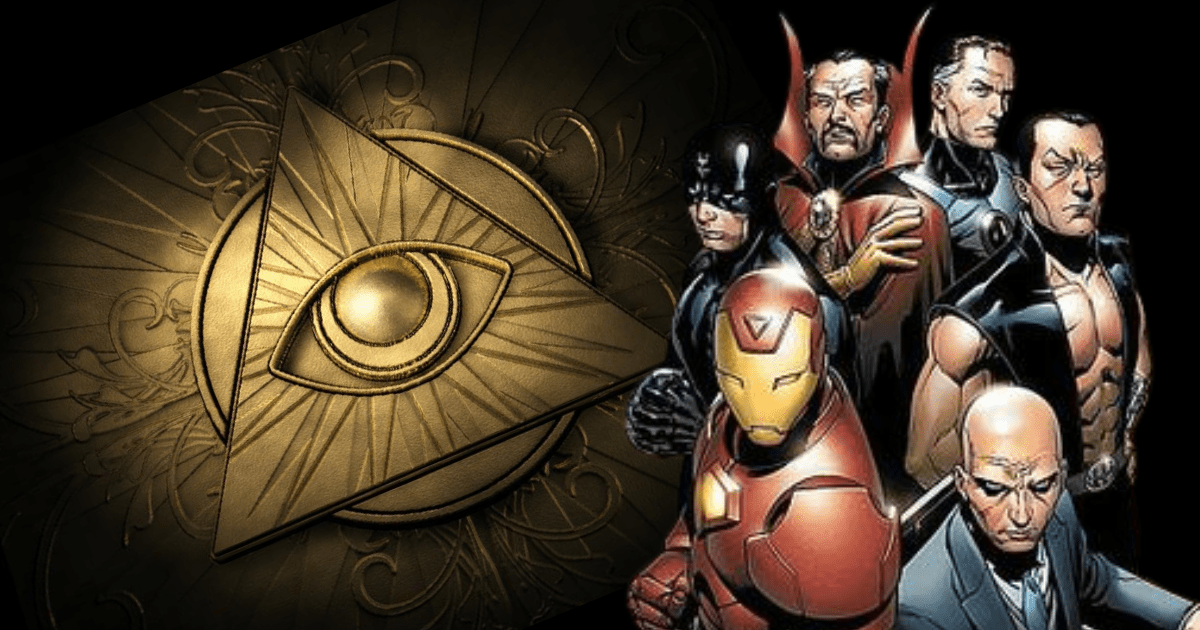 Doctor Strange in the Multiverse of Madness is finally here! And with its arrival, comes a new introduction to the MCU – The Illuminati. The Illuminati is a secret cabal with members comprised of Marvel’s most powerful heroes that come together to make the difficult decisions no one else will. They defend all of reality, even extending to other universes, and will do whatever is necessary to keep the people of their universe safe. Sometimes, this comes at a great cost.

Read this guide to gain the best understanding of who they are! We know the motivations of this group, and what their purpose is, but who would join it? Who runs it? Why would our heroes join the Illuminati, making decisions that can affect the entire world, universe, and even the multiverse in some cases? How will they live with themselves after they make those decisions?

So without further ado, let’s go meet the Illuminati members or some of them at least. Of course, the multiverse IS mad, so, only dive in at your own risk…

[Warning: some spoilers for Doctor Strange in the Multiverse of Madness discussed below!]

The Illuminati was founded by someone who already had experience in founding organizations that often made dubious choices, that being Tony Stark aka Iron Man (played by Robert Downey Jr. in the MCU). In the timeline of the comics, Tony Stark is a genius and has the ability to create almost anything from his technological arsenal that he perfects himself, donning a suit of armor to carry out heroic deeds.

While his past is dubious, given his warmongering family, it is important to remember he has also done a lot of good for the world. Despite this, he knew the foundations he’d publicly created could not act in such ways or secrecy, and knew that an organization that would follow what is logical and needed, over moral and ethical would need to be created, and thus, he founded the Illuminati.

Stark knew he needed to select a few people for the Illuminati with the power to make such decisions, and not always allow morality to prevent their actions. With this in mind, it’s time to meet the members Tony Stark believed could make these decisions.

First up, we have Charles Xavier, aka Professor X. Leader of the X-Men. He is canonically one of the strongest heroes in all of the marvel universe and is capable of incredible telepathy. He fights for all mutant-kind and believes they all deserve rights. He also teaches them to learn their powers in a safe and educative environment, which led to him creating the X-men.

As you probably already know from the many Marvel movies of the past, the X-men are a team of heroes that aim to fight for these rights and prevent others from using mutants for their own evil deeds, or other mutants themselves acting out hateful crimes.

Regardless, Charles Xavier is no stranger to dubious decisions, and his ability to make such decisions with ease is why he is important to factor into the Illuminati and its role in each universe.

In Multiverse of Madness specifically, we see Sir Patrick Stewart return as Charles Xavier yet again, but play a much more supportive role. He seems aware that his demise is right around the corner, yet remains to make a difficult decision that could put his entire universe at risk. A good reason to have him on the Illuminati then, wouldn’t you agree?

As one would expect, the Sorcerer Supreme of your universe would most likely be the best mystical weapon you could acquire on your secret cabal, so Iron Man aimed to recruit Doctor Strange as well.

Capable of wielding incredible amounts of magic, it’s obvious to see why he was recruited into the Illuminati. However, as we see in Doctor Strange in the Multiverse of Madness, perhaps it was not the best idea to recruit Benedict Cumberbatch’s Doctor Strange after all, as it led to the incursion of 2 universes. Although, perhaps Strange isn’t the best fit, but, in most universes, it seems to have worked out. At least, for now.

Namor is the King of Atlantis and a fierce opponent to many heroes and villains alike. His main goal is to defend his kingdom no matter what, and ensure the power of his people remains.

Atlantis is an incredibly advanced underwater civilization, often clashing with Wakanda for many reasons – Vibranium being just one of them. While Namor is a very aggressive, dubious, and mostly selfish king, he cares for his people nonetheless and will do whatever it takes to protect them.

He has quite a powerful role in Earth’s manners, mainly due to his role as king of Atlantis, requiring many other nations to work with him, either out of necessity, respect, or fear. Not like it matters to Namor anyways.

Due to his power and influence in many areas of Earth, it seems fitting his input would be required. Given he will do anything so long as his status and people remain in the position he desires.

Tough decisions that don’t affect him guarantee morals will not get in the way. Or so it was believed, until the World War Hulk incident happened, leading to Namor’s resignation from the cabal.

Regardless, he remains one of the strongest members of the Illuminati to date. Namor, believed to be played by Tenoch Huerta, is expected to enter the MCU in a not-so-friendly manner, in Black Panther: Wakanda Forever later this year.

Blackagar Boltagon, King of the Inhumans, is capable of destroying nearly anything with a simple whisper, and god forbid he shouts. While functionally mute outside of battle, he is still capable of making many decisions in regards to the Inhumans and their safety, alongside his immense power.

Like many others on this list, it makes sense Tony would wish to recruit him to make some major decisions for the people of his universe. He is often seen alongside his Queen Medusa as well, given they both have large decision-making roles in regard to the Inhumans. Medusa often does the speaking for obvious reasons.

Those of you who recall the Inhumans series will recall Anson Mount as Black Bolt in it, and we saw him return, albeit briefly, in Doctor Strange in the Multiverse of Madness.

The Inhumans’ existence remains a touchy subject for many on Earth, especially due to the already highly volatile mutant situation. However, Blackagar Boltagon’s incredible intelligence and fierce personality make him a crucial member of the Illuminati.

Reed Richards, aka the “Smartest Man in the Universe”

Reed Richards, otherwise known as Mr. Fantastic, is widely considered to be the smartest man in the universe and is a founder of the Fantastic Four. He has proven on many occasions to be able to create new technology within mere hours or days, depending on how complex it is.

Regardless, in the comics and in films a few times already, his intelligence has saved the Earth many times, including against Thanos, Galactus, and even Dormammu.

While his stretching powers may not seem very strong, they are merely an extension of his intelligence, and he will always find a way to use them to his advantage. His intelligence, however, is exactly why he lacks morals at times, merely because it is the more logical decision to make, even if he disagrees with its ethics of it.

Richards’ intellect and ability to make decisions incredibly fast, while being assured of their outcome, or all the other possible outcomes he’s calculated, make him an essential member of the Illuminati, and one of the most powerful to date, given both his intelligence and his steel-clad personality for decision making.

In most runs, he remained the sole member until the Illuminati would disband over the difficult decisions they had to make. In the past film iterations, he has been played on screen by Ioan Gruffudd, Miles Teller, and in Multiverse of Madness by long-time fan favorite fan cast John Krasinski.

Illuminati Members in Multiverse of Madness

While this was the original setup of the Illuminati in the comic run that created it, the Doctor Strange sequel doesn’t exactly have the same lineup, so let’s go take a look at the newcomers, shall we?

In this universe, Lashana Lynch’s Maria Rambeau took on the role of Captain Marvel instead of Carol Danvers. She would have dealt with the major intergalactic communities throughout that universe. Clearly, it makes sense she would take on the role of an Illuminati member, as her vast cosmic knowledge will prove very useful.

It can be assumed, like Carol Danvers, she gained her powers through the Cosmic Cube. This would have granted her immense power on a cosmic scale, very similar to that of the reality stone, and the powers it gave Wanda.

Does leave you wondering if Brie Larson’s Carol Danvers is her powerless best friend in this universe as well, or maybe something else? And what about Monica? Does she exist in this universe? Who knows!

Peggy Carter (played by Hayley Atwell) much like Steve Rogers, is a super soldier from the past, ready to fight for what’s right in her lifetime, although still able to make very morally dubious decisions, like many of her fellow members.

Captain Carter is someone we have already seen in action in the animated MCU series What If…?, which explored many different universes that had events play out differently.

Peggy taking on the role of Steve Rogers is a very interesting take on the character, although it does leave me wondering; is this the same Peggy Carter we met in What If…? Or is it just another Peggy that just so happened to take on the same role? I’m not sure, but more episodes in What If…? are expected in the series featuring Captain Carter, so perhaps not.

Her role, like others, is short in this film, but impactful nonetheless, and it is made very clear to the audience why she was essential to the Illuminati. As far as the What if…? Captain Carter goes, given her ending in Multiverse of Madness, hopefully, that is a different Peggy.

Following the death of his universe’s Sorcerer Supreme, Stephen Strange, Baron Karl Mordo took the role and Strange’s spot in the Illuminati.

Played by Chiwetel Ejiofor, Mordo’s role is very much like the original Doctor Strange from this universe. In Multiverse of Madness, he allows jealousy and anger to control some of his more wary decisions, as seen when he assaults 616’s Doctor Strange solely to prove he is better than him.

Regardless, Mordo is strong, intelligent, cunning, and very skilled in the mystical arts, making him a good replacement for Dr. Strange on the Illuminati.

That’s it for my Illuminati members roundup! Who is your favorite? Who do you want to learn more about? Let us know in the comments or on social media!

If you want to explore even more about the Illuminati and the Multiverse, our fellow writer Vin, has written an in-depth Multiverse of Madness comics reading guide.