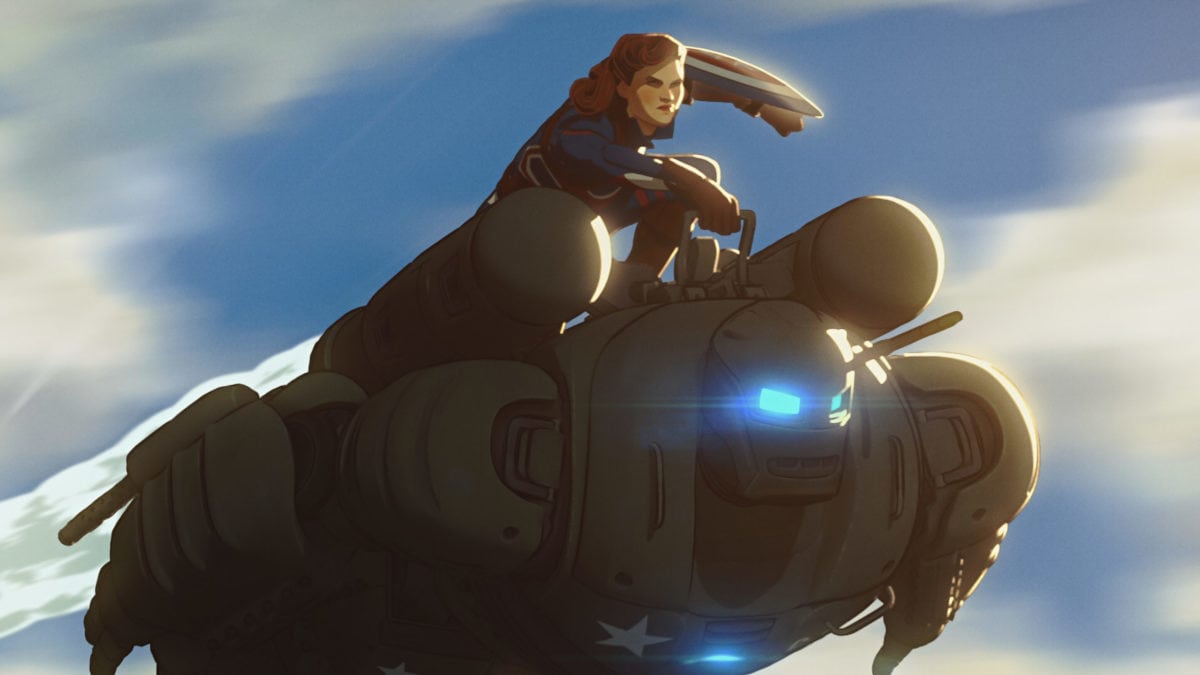 Marvel’s first big swing at animation has finally arrived on Disney Plus as What If…? premiered today on the streaming service. The show sees Jeffrey Wright’s The Watcher telling us about the multiverse, as the ending of Loki finally opened up the MCU to the multiverse. The twist is that the stories being told are retellings of previous Marvel movies. For instance, episode 1 is a retelling of Captain America: The First Avenger with the main character actually being Peggy Carter and not Steve Rogers. With the multiverse now open, He Who Remains dead, and the TVA not around to keep things in order, The Sacred Timeline is open to an infinite amount of possibilities. Episode 1 is our first look into the multiverse and the ramifications it will have for the entire Marvel Cinematic Multiverse.

SPOILERS for the first episode of Marvel’s What if…? below!

The episode opens with Jeffrey Wright’s character, The Watcher, explaining how time is more than a linear path, it’s a prism of endless possibility where making a single choice can branch out into infinite realities. We then go back to where we began in Captain America: The First Avenger with Steve Rogers about to be given the super soldier serum. What changed this time was instead of Peggy watching Steve’s transformation from the booth she decided to stay down in the laboratory with him. The Watcher then explains that is the moment where Peggy Carter birthed a new universe, her one small decision to stay in the lab instead of the booth led to a series of events that created an entirely new reality. We then see the same Hydra agent that bombed the lab in the movie (played by Richard Armitage in the film), this time around he detonates the bomb before Steve is given the serum. Steve attempts to take down the bomber but is shot. Howard Stark exclaims this is their only chance at this experiment, leading Peggy Carter to make the decision to be given the serum herself, as she was the only one left alive, well, and willing to jump in as a replacement in the lab.

We pick up after the experiment, the military casts doubt on Peggy as a super soldier and calls the experiment a total failure. We see a moment between Steve and Peggy where they discuss how Steve was supposed to be the super soldier. Steve helps to reassure Peggy that she was the right one to be given the serum. We cut to the same scene from the first Cap movie where Red Skull steals the Tesseract from an old man guarding it. This time around Red Skull is not played by Hugo Weaving. Peggy pleads to catch up to Hydra to take back the Tesseract but the military doesn’t sanction it. After Peggy’s rejection to save the Tesseract, we see a scene at a bar where Howard Stark approaches Peggy with her official Captain Carter uniform and gives her the shield made of vibranium, this time with the British flag on it and not the American flag. After the bar scene, we see a group of Hydra vehicles driving and guarding Dr. Zola, who appeared in The First Avenger. We get our first introduction to Captain Carter as she ignores the military’s orders and destroys all the Hydra vehicles then captures Dr. Zola and the Tesseract after a fantastic action sequence. Peggy brings the Tesseract back and tells Howard Stark he probably knows what to do with it. Howard, now working on a secret project, asks Steve if he’s ready to join the war.

The next part of the episode sees Captain Carter going to save the 107th unit just like Steve Rogers originally did. After saving them, we see the scene where Captain Carter and the Howling Commandos are pinned down and need air support. It’s revealed that the secret project Howard Stark was working on was the Hydra Stomper suit powered by the Tesseract and has none other than Steve Rogers controlling it. After Steve and Peggy destroy all the Hydra tanks and vehicles they cheer for Captain Carter. This leads into an action montage with some cool 40’s music playing while Captain Carter and the Hydra Stomper work together to take down Hydra airplanes. After the montage, we see the Red Skull announce his plans to summon an interdimensional being(more on this later). We see the same mountainside train scene from the first movie, this time Steve supposedly dies instead of Bucky, after it is realized that the Red Skull tricked them into hijacking the train, only for the train to explode. In the lead-up, there are a couple of “Easter egg” jokes about Bucky being scared of trains, and Bucky saying Peggy almost tore his arm off which are an obvious reference to what happens to Bucky in the MCU timeline. Peggy, distraught with what seems to have happened to Steve, gets Dr. Zola to tell her everything about the Red Skull’s plan to summon the interdimensional being. Peggy then tells the rest of the Howling Commandos and they prepare to invade Red Skull’s secret Hydra castle.

Captain Carter and the Howling Commandos proceed to invade the Hydra Castle with Howard Stark joining them. As they invade the castle, Red Skull summons the interdimensional creature through a Tesseract portal. As the being comes through the portal it is revealed to be some sort of tentacle monster, strangely resembling a certain Marvel villain by the name of Shuma-Gorath. It is heavily rumored that Shuma-Gorath will appear as a main villain in Doctor Strange in The Multiverse of Madness. This could be an entirely different monster though, as a way to throw off some Marvel fans. We then cut to Bucky finding the Hydra Stomper suit and seeing Steve unconscious on the floor, revealing that he is indeed still alive. The tentacle monster crushes Red Skull and Captain Carter begins to fight it, attempting to push it back through the portal from which it came. Hydra Stomper arrives to help Captain Carter just as Howard Stark figured out a way to start pushing the monster back into the portal. Captain Carter finally realizes the only way to push the monster back into the portal is by doing it herself. She pushes the monster through the portal, as the portal consumes her, her last words to Steve are a role reversal where Peggy promises Steve to be there for their first dance together on Saturday night. In The First Avenger, Captain America’s last words to Peggy were the same thing just as he crashed into the ice and was presumed dead. The final scene in the episode sees Captain Carter arrive in presumably 2012, the same way Loki arrived in the first Avengers movie. Nick Fury tells Peggy the war ended 70 years ago the same way he told Steve Rogers. The closing moments see The Watcher talking about how one choice gave way to an entirely new story and gave the multiverse a new hero.

Overall, Marvel’s first attempt at animation was pretty good. I didn’t seem to have too many complaints after the first episode. Some of the animation was spotty at times, but at times the animation was also brilliant and vibrant. The voice-over work should get better with time as well. Pacing-wise, the episode was able to fit a 2-hour story into 30 minutes which is a pretty hard feat to accomplish. Marvel may struggle though if they continue the trend of trying to retell MCU stories in 30-minute episodes. The ending of this episode left us at a point that has me wanting more. My biggest hope for this show is for all the stories to tie into one big culmination. Judging by that Guardians of the Multiverse poster leak, it seems we may be headed that way. The highlight of the episode was Peggy Carter herself, seeing her become Captain Carter felt natural with her character already being a true born leader. Although it was weird seeing Steve Rogers voiced by someone else, his character also shined in parts of this episode. I felt that the dynamic between the Hydra Stomper and Captain Carter in battle was interesting and made for some great action scenes. The action sequences felt polished, clean and the animation for them was much greater than expected. The action at times felt more natural than some dialogue scenes. I look forward to seeing much more of Hayley Atwell’s Captain Carter in future What If…? episodes.

My What If…? Episode One rating:

Let us know what you thought about episode one and what you want to see from What If…? down below!

* Rating scale is out of 5 stars(filmmaking/storytelling) and 5 hearts (entertainment quality).