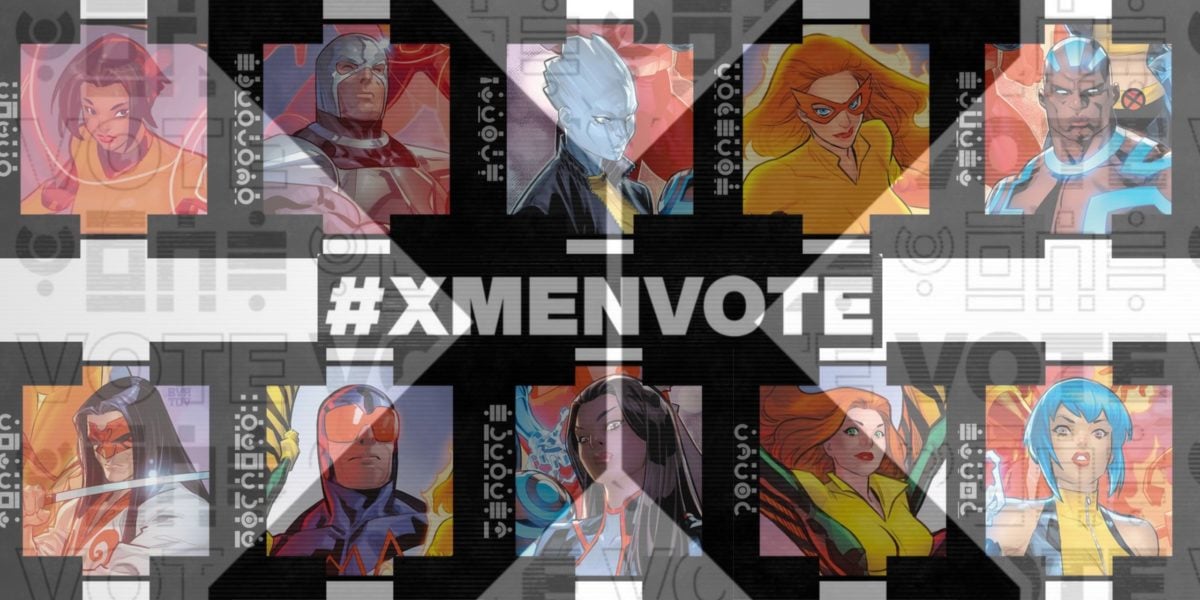 Last year Marvel announced an election completely influenced by their comics fans for the X-Men, new protectors of Krakoa. Now, polls for the X-Men vote are open! Last year’s X-Men vote was held before the Hellfire Gala event, where the new team members were announced. I was eager for the outcome of the X-Men vote and it’s exciting to see Marvel involve fans in a choice that affects the comics.

If you’re looking to catch up on the new Krakoa-era, start with House of X/Power of X by Jonathan Hickman. This book is a collection of the two miniseries intertwining them “to reveal the secret past, present, future, and far future of Mutantkind! It all starts when Charles Xavier reveals his new master plan for Mutantkind, one that will bring mutants out of the shadow of humanity and into the light.” Otherwise, if you have Marvel Unlimited or enjoy buying single issues here is a handy reading order list for you!

The vote tied into X-Men which has been running since the Hellfire Gala ended. It’s part of the Dawn of X collection and continues in Reign of X. It is a mix of characters that are typically in the background of the action who are eligible for the team. The nominees from last year were Banshee, Polaris, Boom Boom, Forge, Tempo, Cannonball, Sunspot, Strong Guy, Marrow, and Armor. The winner was Polaris, Lorna Dane.

I was not surprised that Polaris won the vote since her popularity has grown in the last few years. She is close with Wanda, her “sister”, and Magneto, her father, and has made appearances alongside them. Polaris also has multiple animation appearances and a live-action show that has given her a boost. In the Fox/Marvel show, The Gifted, Lorna (played by Emma Dumont) was a main character for multiple seasons. Fans loved Dumont as Lorna and now that Disney owns Fox I wonder if we will see Lorna Dane return in a future X-Men project.

The Mutants for this year’s vote are again a mix of minor characters drawn from different X-Men eras. Armor, Avalanche, Bling, Firestar, Gentle, Gorgan, Micromax, Penance, Siryn, and Surge are all up for a position on the X-Men. Although a few of them have questionable pasts, each has an incredible power set that would serve the new X-Men team well.

Since Marvel is bringing in characters from all different X-Men eras they are bound to have conflicts with their potential teammates. But, these mutants wouldn’t be nominated unless (I’m assuming) the Quiet Council of Krakoa trusted them. I’m looking forward to how this will affect the X-Men and how the team will adapt to adding a new member, as well as fighting the new challenges that face their home.

With the vote, Marvel has also announced that the Hellfire Gala will return this June to announce the winner. Last year’s Gala was quite the event. Hopefully, they will keep it up to the same standard as last year. The variant issue covers with the X-Men in their outfits were absolutely stunning and I’d love to add more to my collection. Story-wise it was a great way for Krakoa to establish its place in the world and give a look at what the future will be for Mutants across the comics. Mutants and humans have had a rocky relationship throughout history. Being open about the X-Men team and the vote is a step in the right direction for a good relationship.

I have a strong feeling Armor will be the winner since this is her second year in the vote. It feels like Marvel is pushing for her to be part of the team even though she came in sixth place last year. She has already been a member of the X-Men and the New Mutants in the past so I think that might give her a boost with fans of those comics. I also think Surge has a good chance at securing a spot on the X-Men. Surge appeared in New X-Men thanks to Emma Frost recruiting her. There she showed intense bravery and leadership skills that fans haven’t forgotten about.

From Marvel’s website, it sounds like this is the last time the vote will happen. The announcement says, “The last member of this new X-Men team is in YOUR hands!” Will this be the end of the annual X-Men vote? You can vote for the new X-Men member on Marvel.com. The polls are open from January 10 to January 13 at 11:59 pm EST. There is still plenty of time to vote for your favorite Mutant!

Who are you voting for? Let us know in the comments or on our social media.