Mapping Out ‘The Rings of Power’ Seasons 1-2 Mapping Out ‘The Rings of Power’ Seasons 1-2

At long last, Prime Video’s The Lord of the Rings: The Rings of Power has landed on our screens – with quite an impact. The streaming service’s crown jewel and the most expensive television show ever produced, the Lord of the Rings prequel series has to balance intense public scrutiny with a wide-reaching story that spans thousands of years of J.R.R. Tolkien’s fictional history. Three episodes in, this series is proving to be more adept at juggling these difficulties than I ever expected.

However, for a show named after Sauron’s greatest triumph, there’s been no mention of shiny golden rings nor a glimpse of what the Dark Lord himself is up to. The Rings of Power is already confirmed to consist of five seasons, totaling 50 hours of epic fantasy television over the next few years. (It’s been so meticulously planned out, that the showrunners even know what the final shot of the series will be!)

The Rings of Power season 1 consists of eight one-hour episodes, which means future seasons must be longer (or we’ll be getting more than five seasons). Working off the five-season assumption, I’ve mapped out my own thoughts on how the show should progress in two articles – this being part one. From Sauron’s first appearance to the forging of the Rings and the destruction of Eregion, here’s how I think The Lord of the Rings: The Rings of Power seasons 1-2 should progress, part two will focus on the potential of seasons 3-5.

Changes to canon in The Rings of Power

Tolkien’s timeline for the Second Age spanned thousands of years. Controversially, the writers of The Rings of Power decided to consolidate all of its major events into roughly a decade or so, as evidenced by the introduction of Elendil and Isildur before the Rings themselves.

In Tolkien’s history, the Rings were created about 1,600 years before Elendil was even born. In fact, almost 200 years passed between the forging of the Rings and Sauron’s war with the Elves. What was everyone doing during that time? I don’t think Tolkien himself even knows.

Before the show’s premiere, I was very much against consolidating these events into such a short period of time, mostly because I disagreed with the showrunners’ excuse of human characters dying off every season. This is THE LORD OF THE RINGS. It’s the most grandiose fantasy story ever told (sorry, Game of Thrones fans).

As a fan, I wouldn’t care if new humans and Harfoots were introduced every season after a significant time jump – our main characters are Elves, and their immortality will anchor the show. I was worried about certain things feeling rushed, and while that’s still a concern of mine, I’ve come around a bit more after seeing the first few episodes. The Rings of Power is slowly and methodically setting up its story, but not in a boring way. And though consolidating these major events may work, I predict we’ll be waiting quite a while to see any of them.

The Rings of Power season 1: setting the stage

No one wants to hear this, but The Rings of Power is a 50-hour show, and we’re only three hours in. We should all accept the fact that Season 1 is simply going to be a lavish, drawn-out setup for the epic battles looming in later seasons.

Episode 1 firmly established the period we find ourselves in: a time of relative peace in Middle-earth, a time where Sauron is a distant memory, where Elves are at the height of their power and Mordor isn’t even a black spot on the horizon.

Put plainly, I don’t expect any grand moments of Middle-earth’s history to be depicted in this first season. Prime Video is playing the long game here, which is absolutely the right choice for a series this epic in scale.

They’ll draw you in with the sweeping visuals, introduce strong characters from all of Tolkien’s central races, and at the end, tease you with what you came for: the Rings of Power themselves. I believe the first season will cover the introduction of our major players, set up their series-long personal journeys, and end with the introduction of Annatar and the birth of Mordor.

Calling himself Annatar, the “Lord of Gifts,” Sauron took a fair form when he arrived in Eregion. We’ve seen Eregion through Elrond’s eyes, and while there’s no Annatar in sight, Celebrimbor is already eager to create something as grand as Fëanor’s Silmarils.

Aided by the Dwarves’ expertise, I think Celebrimbor and Elrond will construct their great forge throughout Season 1 without knowing what they will use it for.

Meanwhile, based upon Galadriel’s discovery in Númenor and Arondir’s in the Southlands, I think the south will become a barren wasteland by the end of season 1. Annatar will arrive in Eregion with his gift of knowledge in the final episode, creating a rift between the Elves, and the first stream of molten gold will be poured as the screen slams to black.

Of course, Sauron could be lurking anywhere in this series. Many liberties are being taken with Tolkien’s work, and as a result, we could see a twist at the end of season 1 revealing that Sauron has been alongside our characters from the beginning.

While it would be shocking, I hope Sauron isn’t some kind of finale reveal. I want his introduction to be as benevolent as Annatar appears, sowing the seeds of betrayal that will sprout in The Rings of Power season 2.

I think Halbrand was the most obvious Sauron candidate, but with the reveal of his royal Southlander heritage, I see a darker future in store for him.

Likewise, Adar from episode three could be Sauron, but given the Elvish name and long black hair, I’m guessing he’s a corrupted Elf. The Stranger is another option, but a bearded old man has to be one of the Istari (personally, I’m leaning towards a Blue Wizard).

British actor Anson Boon is apparently playing Sauron in The Lord of the Rings: The Rings of Power, so keep an eye out – although, of course, a shapeshifter could be played by multiple actors.

The Rings of Power season 2: The forging of the Rings

The central storyline of season 2 should be the forging of the Rings of Power. I expect a time jump between each season, which in this case should be fairly significant – let’s say five years. However, I think the writers will want to move faster than that, so it could be much less. Annatar and Celebrimbor should have forged most of the Rings already, but I think we should see the final few created onscreen.

There are 20 Rings in total – seven for the Dwarves, nine for Men, three for Elves, and of course the big one for Sauron. At the beginning of season 2, Celebrimbor and Annatar should be putting the finishing touches on the Rings meant for Dwarves and Men.

In accordance with Tolkien’s writings, Annatar should then make his leave for the Southlands, which by this time should resemble Mordor.

Mount Doom was created by Morgoth in the First Age, but Mordor was not. The Southlands is clearly the location of Mordor in the Third Age, and the Orcs’ work in season 1 appears to be transforming the region significantly.

While Sauron could forge the One Ring in the fires of Mount Doom with lush greenery surrounding him, I expect the land of Mordor will be born around the time of the Ring’s creation. I think Sauron will descend upon the barren Southlands in season 2, relighting the fires of Mount Doom in dramatic fashion and blackening the earth with his evil influence.

As he gathers strength and begins to build his Dark Tower, we will see him forging the One Ring concurrently with Celebrimbor forging the Three Rings of the Elves.

The Three Rings were forged by Celebrimbor alone, but still beholden to the One Ring as they were crafted using Sauron’s teachings. Depicting the forging of the Three intercut with the forging of the One would be an incredible sequence in the middle of season 2, showing how Sauron and the Elves seal their fates together despite being thousands of miles apart.

At this time, Halbrand should make his way back to the Southlands and begin restoring his family’s power. Elrond will be in Eregion with Celebrimbor while Galadriel will be separated from him due to her distrust of Annatar.

At some point, Galadriel will marry Celeborn and come upon the settlement that will become Lothlórien, but that could happen at any point before season 5.

I expect the Harfoots to discover the true nature of the Stranger by season 2 at the latest as he grows accustomed to Middle-earth. I can see Nori and the Stranger’s story intersecting with Galadriel’s as his powers grow.

Divisions in Númenor will deepen as Elendil’s people continue to support the Elves, with Pharazôn’s power and influence slowly growing. Númenorean vessels will venture closer to Middle-earth as they begin to expand their interests.

I don’t have specific predictions for the Arondir and Bronwyn, but I expect Arondir will escape the Orcs in season 1 and continue to help Bronwyn and the Southlanders. I think their story will intersect with Halbrand in season 2, setting up the strengthening of the Southlanders.

Theo’s evil blade will obviously get him into more trouble, and I wouldn’t be surprised to see him leading a group of Southlanders into Sauron’s service as he grows older.

At any rate, season 2 should end with Sauron placing the One Ring upon his finger, immediately alerting the Elves to the nature of his treachery. The Three will be hidden as Sauron prepares to march upon Eregion in fury.

The finale of Season 2 will likely feature the destruction of Eregion by Sauron, the capture of Celebrimbor, and the distribution of the Three among the Elves. The Seven will be hidden as Sauron takes the Nine for himself, ending with Galadriel, Elrond, and Gil-galad each coming into possession of their Ring.

With a dramatic end to Season 2, The Lord of the Rings: Rings of Power will leap even higher as it seeks to become the number one fantasy series in today’s streaming landscape. The series can coast through the first season on hype over its cost and crazy fan theories, slowly building up the relationships that will define future seasons.

I think that’s the best route for Rings of Power to take since without a significant investment in characters at the beginning, the show won’t have the kind of longevity Amazon seeks. While we may be disappointed at how slowly things are moving in the beginning, it’ll all be worth it in the end!

You can also check out our reviews of this epic series for breakdowns of the premiere and episode three “Adar”! And don’t forget to check out my mapping out of Rings of Power seasons 3 through 5 here! 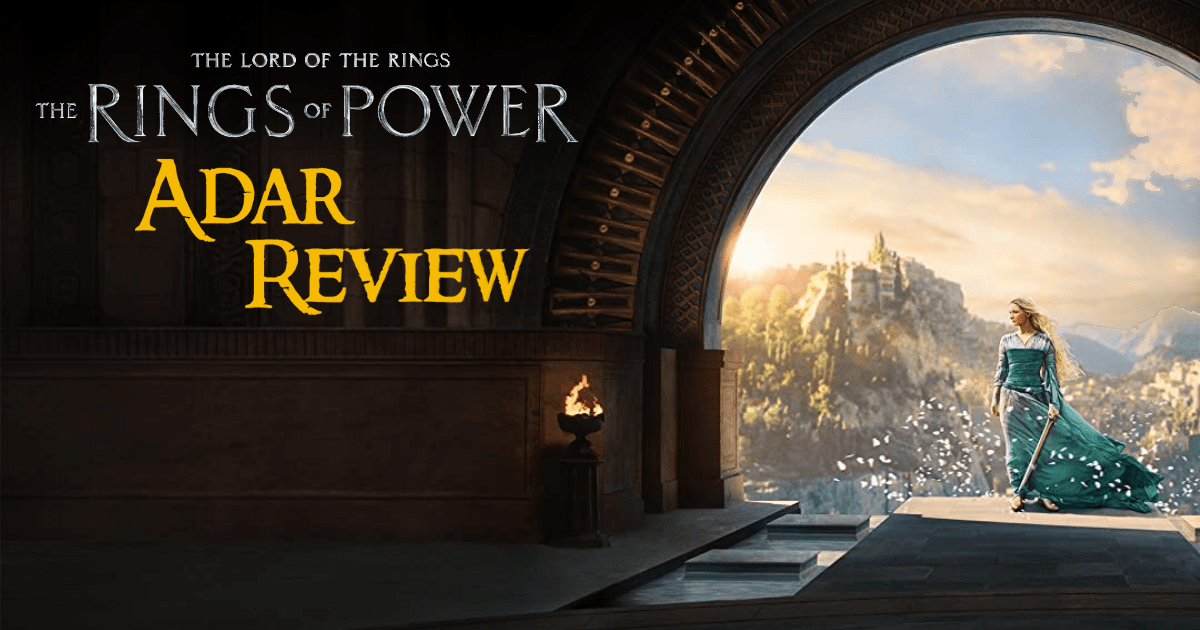