The first two volumes of the manga adaptation of Leia, Princess of Alderaan by Claudia Gray are finally here in the US! Volume 2 was just released in May and it is stunning. I read the novel a while ago and thoroughly enjoyed it. Now that it’s in a new format by artist Haruichi I love it even more.

Leia, Princess of Alderaan starts with Leia’s 16th birthday when she continues the royal tradition, her Day of Demand. She declares that one day she intends to take the throne of Alderaan. But Leia has been much more concerned about how her parents are acting lately: lots of meetings and late dinners and not talking to her as much as they used to.

Leia eventually discovers the reason for their secrecy: their involvement in the increasingly organized rebellion. When her work in the apprentice legislature (aka the junior senate) and her parents’ work with the Rebellion begin to intersect, Leia sets out to prove she can be an asset in the fight against the Empire.

[Warning: Spoilers for Leia, Princess of Alderaan below!]

During her Day of Demand, Leia says to prove that she is worthy, she will complete three challenges. One of them is climbing the iconic Appenza Peak which sits behind Aldreaans city skyline. Her second challenge is of the mind where she will represent Alderaan in the senate legislature. And her last challenge is of the heart where she will go on humanitarian missions to planets in need.

Leia’s personality shines through these tasks. It shows that she is the embodiment of hope. Something I love about this book is that not only do we get a great Star Wars story, but we also get to know Leia better. We understand where her kindness and her desire to help people come from.

By the time we meet her in A New Hope, she has already experienced so much. Completing her humanitarian missions and just joining the Rebellion she has seen many different sides of the galaxy already.

This book is part of The Road to the Star Wars: The Last Jedi collection. It features the planet Crait and introduces us to Amilyn Holdo. It shows how Leia and Amilyn became friends so she isn’t just some random character that shows up in The Last Jedi. I also like that Crait has meaning to Leia and the Rebellion. It feels like the planet wasn’t picked randomly.

It was interesting to see what I had imagined in my head in the book for some scenes, as well as character design to be different in the manga. While reading the novel, I didn’t have a clear image of a young Amilyn Holdo. Holdo is described as wearing wild outfits that are unlike anything Leia has ever seen. Her hair is different colors every time we see her and in different wacky styles. When I saw Holdo drawn out, I loved what Haruichi came up with for her character design. She was over the top but not afraid to be herself.

Another friend and fellow Alderinian senator in training is a boy, Kier Domadi. He seems to be on Leia’s side during the first half of the story. But when it comes down to helping the Rebellion, he ultimately betrays Leia. But that will come in a later volume.

I did not see the point of this character other than being Leia’s first love interest. Kier seemed to be one of the reasons for Leia to take action against the Empire, but I don’t think she needed him for that. Her family and drive to do the right thing are the reasons Leia stands up to the Empire.

My favorite part of the book, and one I was excited to see drawn out, is when Leia travels to Naboo’s moon and meets the Queen of Naboo, Dalné. She introduces Leia to Moff Panaka, who was once one of Padmé’s most trusted guards. This part of the story is depicted in volume two.

To meet Panak Leia had to be dressed in something more formal. Dalné ended up lending her one of Padmé’s old dresses. Seeing Leia in one of Padmé’s dresses was so emotional and made me miss Padmé even more since she looks so much like her.

Panaka was so shaken when he saw Leia, for a moment he thought he was seeing Padmé. He begins to question her about her life, being adopted, and if she knows who her real parents are.

I could feel Panaka getting worried as Leia spoke and the guilt on his face is not hidden well. I think part of Panaka’s guilt is about everything he’s done since Padmé’s death. He had a close relationship with Palpatine and after the rise of the Empire, Panak helped take over Naboo, making the position of queen only ceremonial. Siding with the Empire reverses everything that Padmé worked so hard to build.

Hopefully, Volume 3 will be out in the U.S. in a few months. Until then I will try to cross off more readings from my Leia Companion Guide. 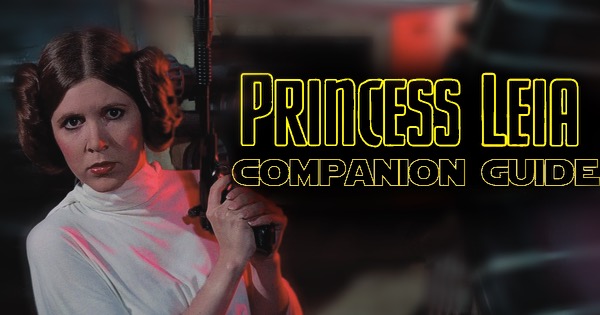 You can find Claudia Gray’s novel Leia, Princess of Alderaan on Amazon and other booksellers here. Volume One and Two of the Manga version are also available on Amazon (Vol. 1, Vol. 2).

Have you read either version of Leia, Princess of Alderaan? Let’s talk about it over on our Twitter @mycosmiccircus! And make sure to follow us for more Star Wars content and news.