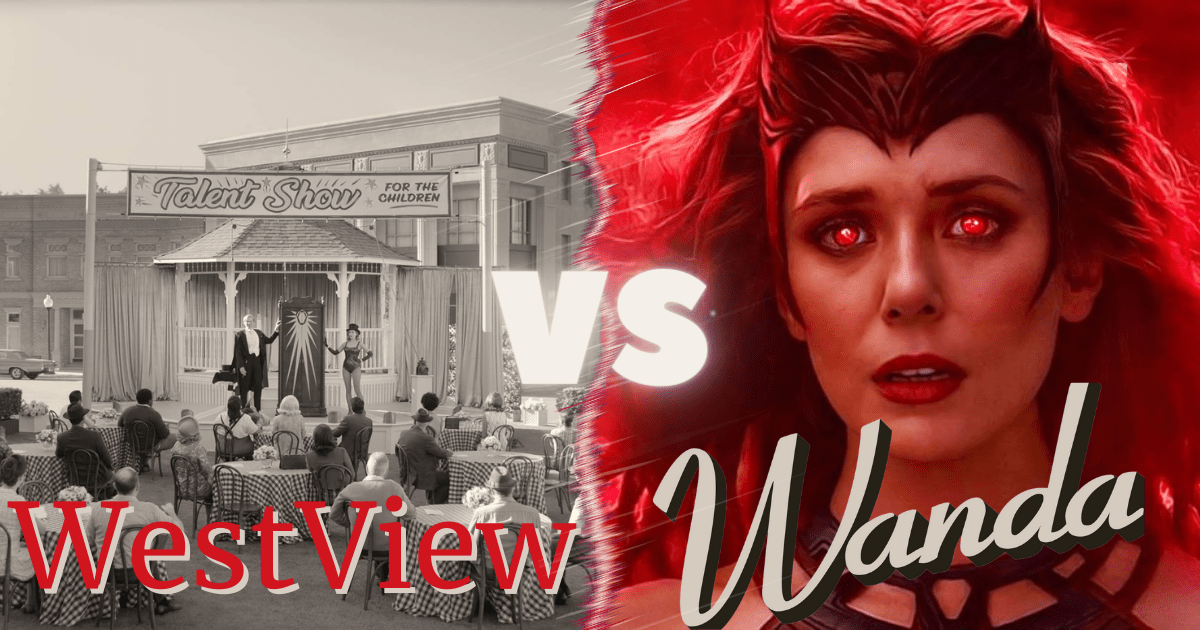 Welcome back, dear reader as we continue to explore the loose threads from the beginning of the MCU’s Phase Four. 2021 brought fans so many exciting projects, each one with plenty of answers but left even more questions. None more so than WandaVision for this writer.

In my last loose thread, we explored where White Vision might show up next, but now seems a good time to shift from the heroes in the sky to those left on the ground. The citizens of Westview deserve their retribution for Wanda’s actions, and I don’t think it’ll end happily for our Scarlet Witch. Let’s explore where we may see Westview return in the MCU.

In the teaser trailer for Doctor Strange in the Multiverse of Madness, Wanda, looking very different since we last saw her in WandaVision, is approached by Strange. The exchange goes as follows…

Wanda: “I made mistakes and people were hurt.”

Dr. Strange: “I’m not here to talk about Westview.”

Wanda: “Then what are you here for?”

That’s an excellent question Wanda, what is Doctor Strange there for if not to speak about your actions in Westview? This interaction between Elizabeth Olsen’s Wanda Maximoff and Benedict Cumberbatch’s Stephen Strange has many implications. While the trailer continues on, implying that the Doctor is in for something related to the Multiverse, I’m more concerned with Wanda’s belief of why he was there.

WandaVision began so innocently. Viewers were dropped into a black and white world where everyone seems incredibly happy. However, by the end of the first episode, we see our first glimpse that not everything is peachy keen.

“Oh, stop it! Oh, stop it….Stop it, stop it, stop it….” Those words are repeatedly stammered by Debra Jo Rupp’s Mrs. Hart, increasing with panic even through her television-ready smile. However, with a quick order from Wanda, Vision (Paul Bettany) jumps to action. With every passing episode, more of Wanda’s control over the people of Westview is revealed. Parallel to Vision, viewers discover the torturous roles that the citizens play, allowing Wanda’s delusions to continue.

The show ends with Wanda fully assuming her Scarlet Witch persona, flying away from the town she held captive. Sure, she releases the townspeople from their prison, but they were terrorized by someone the world sees as a hero. Where is justice for those people who had their lives taken over, controlled, and tormented? And why is it important for Wanda Maximoff to be held accountable?

The MCU has done a fairly good job making it known that the heroes we see on screen should and will be held accountable for their actions. The entire premise of Captain America: Civil War was how the Avengers have gone too long unchecked. Lagos, Sokovia, New York City, and countless other places have been the subject to destruction in the name of the Avengers. Some may argue that the heroes were attempting to save all, at the expense of a few, but what about those few?

Wanda herself has been the center of many problems throughout the twenty-three movies. Specifically, Sokovia and Lagos where her careless actions resulted in mass amounts of death. The Avengers’ civil war was fought in the name of Wanda and each time she got off with not much more than a slap on the wrist. Shouldn’t she pay for the crimes she committed? Shouldn’t there be action taken against someone so powerful, who uses her powers for selfish gain?

When you paint a picture like that, it’s hard to see how anyone can think Wanda shouldn’t be held accountable for what she did in Westview, let alone for her actions in almost every corner of the world. It’s time for the heroes of the MCU to take the bad with the good because with great power comes great responsibility. So where might we see the repercussions of Wanda’s actions on Westview?

Doctor Strange In The Multiverse of Madness

While I don’t know that any of Westview’s citizens will appear in the Doctor Strange sequel, I do think we’ll see some of the fallout of WandaVision. It’s clear from the teaser trailer that Wanda herself has been living in anticipation of backlash from her actions.

Perhaps her past actions in both Sokovia and Lagos dictate her response to Doctor Strange. However, her acknowledgment of the pain she caused in Westview means that it is never too far from her mind. I think throughout the film, we will see Wanda struggle with her actions from WandaVision. Her desire to be a hero will come in conflict for her children, her Vision, and their happy ending.

In the climactic moments of the film, a flashback to the scene where the entire town is writhing in pain, gasping for air as her scarlet chaos magic chokes the life from them could be shown. This flicker of memory might help her remember who she is and what she wants to be when this is all over.

As for the legal ramifications, this could be an interesting case for our mighty green lawyer. She-Hulk has been pitched as a half-hour legal comedy, which means that we could see Jennifer Walters (Tatiana Maslany) represent the people of Westview as they seek justice and damages against Wanda Maximoff.

It seems only fair that Wanda should be held accountable in a court of law for her wrongdoings. However, my one pause to this storyline being explored in She-Hulk is the comedy aspect. This storyline should be taken seriously because if the viewers start laughing it off, it would feel like Wanda gets off in the court of public opinion. Or that magically it’s not so bad because we’re all laughing together.

So perhaps it’s better suited for our other favorite lawyer, the devil in red. While his new project will not be in the exact same vein as Netflix’s Daredevil, the character himself leaned more towards the serious side. As the champion of the downtrodden, it seems like a case that Charlie Cox’s Matt Murdock would take on.

Perhaps he helps them for free, which is pretty on par for his character. Having the Westview case play out over a season, or even just a smaller arc of a few episodes would help to give us closure about Wanda’s actions while also cementing Murdock as a trustworthy lawyer in the MCU.

But what do you think? Would you like to see some resolution for the citizens of Westview, or would you rather we move on from this injustice? Let us know in the comments or on Twitter @mycosmiccircus!