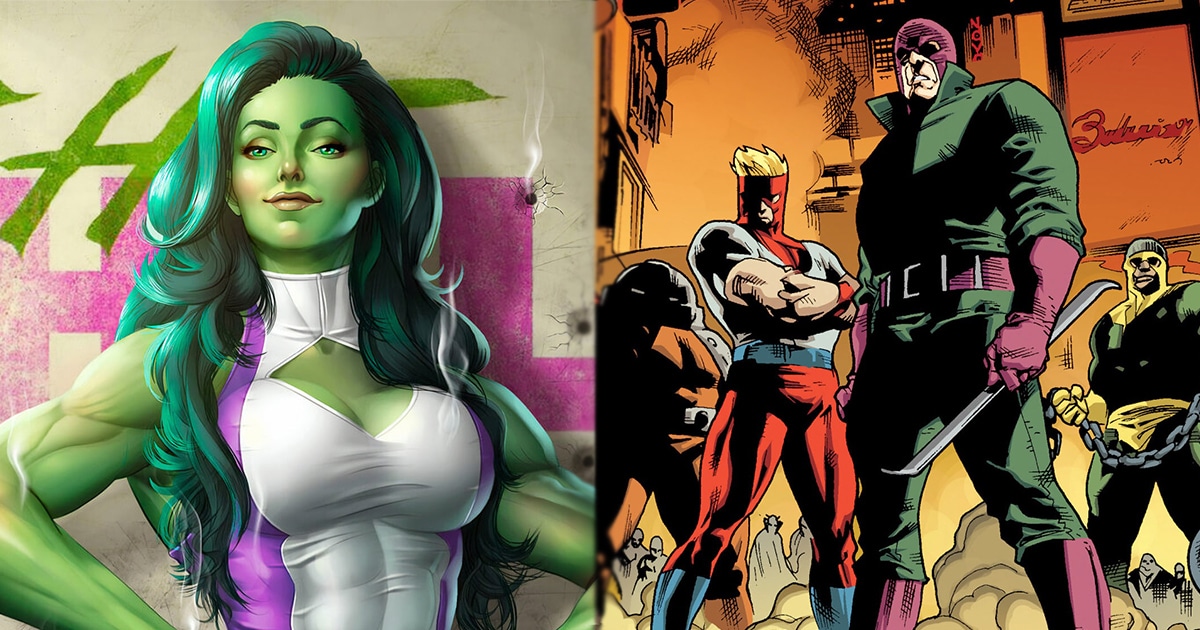 It feels like breaking exclusives and spiraling rumors for upcoming projects in the Marvel Cinematic Universe are the norm. On at least a weekly basis news outlets release stories of new or returning characters appearances in these projects, sharing photos from sets, or disclosing shooting locations.

In return, many dedicated fans pour over every detail released hoping to discover a piece of the puzzle and how it may fit into the bigger Marvel picture. Sometimes the piece fits. Many times the theories are way off. Recently, quite a bit of information was released about a project starring a fan favorite jolly green giant. No….not Bruce Banner, but his cousin Jennifer Walters.

She-Hulk began shooting in April of 2021 with Tatiana Maslany in the titular role. Not much information has been disclosed previously about the project, except what was shared by Kevin Fiege on Investor’s Day in December 2020. The head honcho shared that the show is a half-hour legal comedy along with the show’s directors and a few cast members.

Those few tidbits were enough to tantalize the fan base who was itching for any details after the long pause in Marvel material due to Covid-19. As well, those following Maslany’s work throughout her career knew that Jennifer is in good hands. At that moment, fans were excited and satiated for a little while. However, time marched on and any information became scarce.

Fast forward to recent weeks where fans were treated to an influx of new rumors and information. And the feast began. Stories that recently broke were that Jennifer Walters would be breaking the fourth wall as well as the casting of Jamella Jamil as villain Titania.

Both tidbits of information were not necessarily shocking for a project about She-Hulk, seeing that fourth wall breaking and Titania (A common rival of Jennifer’s in the comic) are integral to her run of comics, having cropped up many times. It was exciting nonetheless to receive confirmation of these facts though because it ensured fans that She-Hulk would remain true to the source material.

Even more recently, our very own Lizzie Hill at The Cosmic Circus exclusively revealed that The Wrecking Crew was coming to the Disney+ series. This exclusive story excited writers and fans of The Cosmic Circus alike, because it helped to put our website on the map.

However, as much as the excitement rushed in, many may be asking: “Who are these people, and what does it mean for the show?”. Breathe and try not to worry, there is an answer and we will figure this out together.

Like most characters and projects released by Marvel Studios, it’s important to step into the crumbling pages of the comics to discover who these people are. The Wrecking Crew (created by writer Len Wein and artist Sal Buscema) first appeared in the November 1974 issue of The Defenders (issue 17).

In that origin, The Wrecking Crew is formed by the original Wrecker, alias Dirk Garthwaite while in prison. While in the slammer, Dirk is approached by Dr. Eliot Franklin, who asks for some help in a plan to ransom New York for money.

At this point, Dirk is a powerless human, then he gains powers of incredible strength, stamina, and durability by picking up an enchanted crowbar during a lightning storm. Turns out, the crowbar was enchanted by Karnilla the Norn Queen, ruler of an Asgardian province and sworn enemy of Odin. She enchanted the tool with magic, believing Dirk to be Loki, an individual she worked with many times in Asgard’s history.

During this storm, Dirk encourages three other men to grasp the crowbar, bestowing them with powers as well. Dirk, the leader, carries the mantle of The Wrecker and continues to wield the indestructible crowbar that granted them all powers.

Henry Camp takes on the alter ego of Bulldozer, rocking a heavily armored helmet, which allows him to fight with his head. Literally. Bulldozer is known for striking his victim with the helmet, which causes significant damage.

Piledriver is the villain name given to Brian Philip Calusky, who has oversized pile-drivers on his hands that he uses to punch his way out of any situation. Lastly is Thunderball, who is none other than the brains of the first mission, Dr. Eliot Franklin. Dr. Franklin sports a large demolition ball attached to a chain that he swings around to strike at those in his way.

These four men escape from prison, causing mayhem through the city of New York. As a group, The Wrecking Crew repeats the well-known cycle that many of our heroes face with their supervillains. They wreck things, fight with the heroes, and when defeated are returned to jail where they scheme a way to get out once again.

There have been a few other members of The Wrecking Crew throughout their history as a team, however, the main four have been the driving force behind the team. Together they have created problems for many heroes; Avengers, Iron Fist, Doctor Strange, and She-Hulk to name a few. though The Wrecker specifically has a grudge against Thor who was critically injured in his first fight with the God of Thunder.

Fitting the Pieces Together

Now that we have some background information about this B-list team of villains, it’s time to explore how they could fit into the larger picture of She-Hulk and the MCU as a whole. Provided that She-Hulk is being branded as a half-hour legal comedy, there are two strong possibilities as to how we will see The Wrecking Crew pop up.

The first is as an episodic villain who appears in one or two episodes that Jennifer stops from destroying New York. It would be interesting to see them maybe early on in the show when Jennifer is adjusting to her new powers. They would be a great match to explore that side of She-hulk without being too overpowered that she does not stand a chance.

The second way they could appear is in a court scene, where Jennifer is the opposing counsel for them and trying to ensure they receive punishment for their crimes. It would even be exciting to see both sides of the coin. Jennifer gains her powers and learns how to use them, defeating them within the first couple of episodes, then proceeds to defeat them in court. Their appearance in the show could be a one-off and they aren’t seen again. However, it could be fun to introduce them in She-Hulk and then allow them to pop up in other projects down the road with other defenders of New York.

She-Hulk, starring Tatiana Maslany, is currently filming and expected to stream on Disney+ in early 2022.