Hello everyone and welcome to the Kang the Conqueror comics reading guide!

After being set up in Loki season one, Jonathan Majors’ Kang the Conqueror is about to take the MCU by storm in Ant-Man and the Wasp: Quantumania and Avengers: The Kang Dynasty.

But who is this strange blue bully and what are his connections to the rest of the Marvel universe? Read on to find out!

Originally introduced in the early pages of Fantastic Four as the time-traveling pharaoh “Rama Tut,” the man named Nathaniel Richards has appeared as a dizzying array of alternate identities and multiversal variants across the past 60 years. But the most well-known of these incarnations is the identity Kang the Conqueror from Earth-6311.

Kang stories are usually about destroying his other variants, fighting against his predetermined future, and assembling groups across the multiverse (whether its a council of multiversal Kangs or a team of multiversal Avengers). As a result, Kang variants come in shades of villainy, ranging from dastardly manipulators to tragic heroes. He also has a complicated relationship with Doctor Doom, who is sometimes his ancestor, sometimes his ally, and sometimes his enemy.

In the comics below, we’ll dive into Kang’s most well frequent iterations, as well his more obscure variants like Victor Timely, Kamala Kang, Kang the Time-Eater, Kang the Conglomerator, and Kangaroo the Conqueror. Enjoy reading!

“Just wait till you meet my variants.”

The Identities of Kang: A Brief History

Before beginning the guide properly, it’s important to understand the general history of Nathaniel Richards and his many personas.

Nathaniel Richards of Earth-6311 is a time traveler from the 30th century. He is implied to be related to both Reed Richards and Doctor Doom, and shares their intelligence, as well as their obsessions for control. Ravonna Renslayer is the love of his life.

As a teenager, Nathaniel Richards visits the 21st century and leads the Young Avengers as Iron Lad. He later adopts the identity of Kid Immortus. After Kid Immortus grows up, he makes himself a pharaoh in Ancient Egypt called Rama Tut. When Rama Tut meets Doctor Doom, he is inspired to build his own suit of armor and calls himself the Scarlet Centurion.

When Scarlet Centurion realizes he has the potential to conquer the entire multiverse, he begins calling himself Kang the Conqueror. This becomes Nathaniel’s primary persona. However, frustrated with his constant defeats, Kang travels to the 1900s as the revolutionary roboticist Victor Timely, where he builds Chronopolis, Kang’s headquarters. Kang poses as multiple generations of the Timely family in order to study the Avengers from a human perspective and manipulate events across the 20th century.

In his 40s, Kang briefly becomes a businessman named Mr. Gryphon in the 21st century. Around the age of 60, Kang returns to Ancient Egypt and resumes his Rama Tut identity as he prepares for his retirement. However, unsatisfied with the mortality of time, Nathaniel travels into Limbo to become Immortus. Living at the end of time, he begins pruning timelines under the guidance of the Time-Keepers.

Continue reading in depth with our Guide to Kang Identities! (Includes extra reading recs for each identity) These early comics introduce Rama Tut, Kang, and Immortus as separate characters. But it wasn’t long before Steve Englehart connected them intricately with “Celestial Madonna: Kang War,” an elaborate crossover between Avengers and Giant-Size Avengers. This era introduced the TVA and Time Keepers, and quickly linked them to Immortus as well. In the Avengers series, Roger Stern & John Buscema crafted one of the greatest Kang stories of all time with “Once and Future Kang.” This epic arc introduces the Council of Kangs and the concept of Kang trying to destroy his other variants, making it an essential part of Kang’s canon and the inspiration for He Who Remains’ story in Loki. 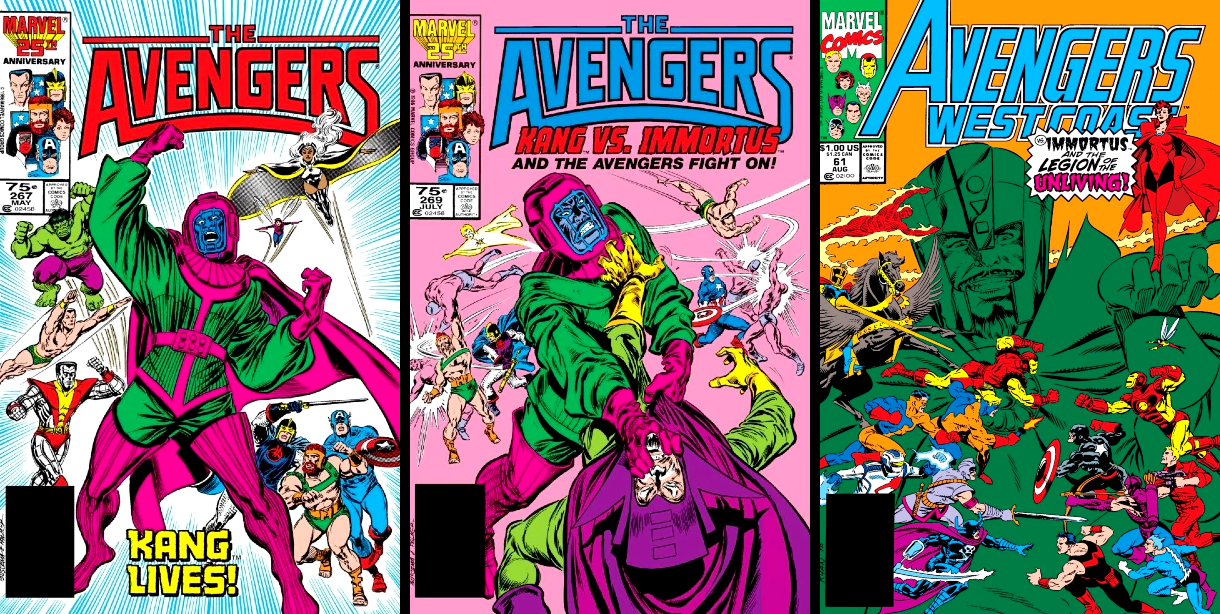 The 90s brought about the powerful “Terminatrix Objective.” More than just the final Ravonna/Kang story, this arc has become an important step in Kang’s canon and even inspired the Loki series with the monster Alioth.

“Terminatrix” was preceded by “Citizen Kang,” the first story to feature Kang traveling back in time and assuming the guise of a normal human named Victor Timely (similar to what he would later do as Mister Gryphon). Meanwhile, the new What If series brilliantly fleshed out the relationships between Immortus, the TVA, and the multiverse. This section is short but extremely important, cementing Kurt Busiek as the modern architect of Kang. His first Kang story, “Destiny War,” succinctly laid out the complete history of Kang and his alternate identities, from Rama Tut to Immortus, making it the most definitive finale for Nathaniel Richards thus far. In his follow-up, “Kang Dynasty,” Busiek crafted one of the most powerful Kang conquests of all time. These are essential Kang comics!

After the sweeping epic of the 2000s, Marvel took a step back and introduced a new spin on Kang, Iron Lad! This section features the birth of the Young Avengers through the eyes of 16-year-old Nathaniel Richards and the rise of Kid Immortus.

Meanwhile other series like Avengers and She-Hulk continued to flesh out Immortus and the TVA, while the Ultimate universe introduced its own version of Kang as a variant of Sue Storm!

In the 2010s, Kang was featured in a series of smaller events. His shenanigans ranged from starting a business in the 21st century to raising the children of Apocalypse. Meanwhile, Deadpool got himself into a series of confrontations with the TVA.

The most important of these adventures might be Avengers: Kang War One by Mark Waid & Michael Del Mundo. In this strangely named story, the Avengers accidentally cause armies of Kang variants to emerge out of the multiverse, similar to the end of Loki. In the 2020s, Kang played an important part in the Infinity Wars event and came into conflict with both Thanos and Doctor Doom. In addition, this era features not only the Kang Corps and the Kang Collective, but also some of the best Kang variants yet, including Kamala Kang, Kangaroo the Conqueror, Kang the Conglomerator, and a Kang/Galactus variant called the Kang the Time-Eater! The stories above contain many of the best famous identities, divergences, and iterations of Kang, but in case that wasn’t enough, we’ve got even more Kang comics for you!

And that’s the history of Kang the Conqueror! What are you planning to read before Quatumania? Which Kang identities do you want to see in the MCU? Let me know on Twitter @vinwriteswords and remember to follow the site @MyCosmicCircus for more Kang content coming soon!

Continue reading with our other reading guides here!