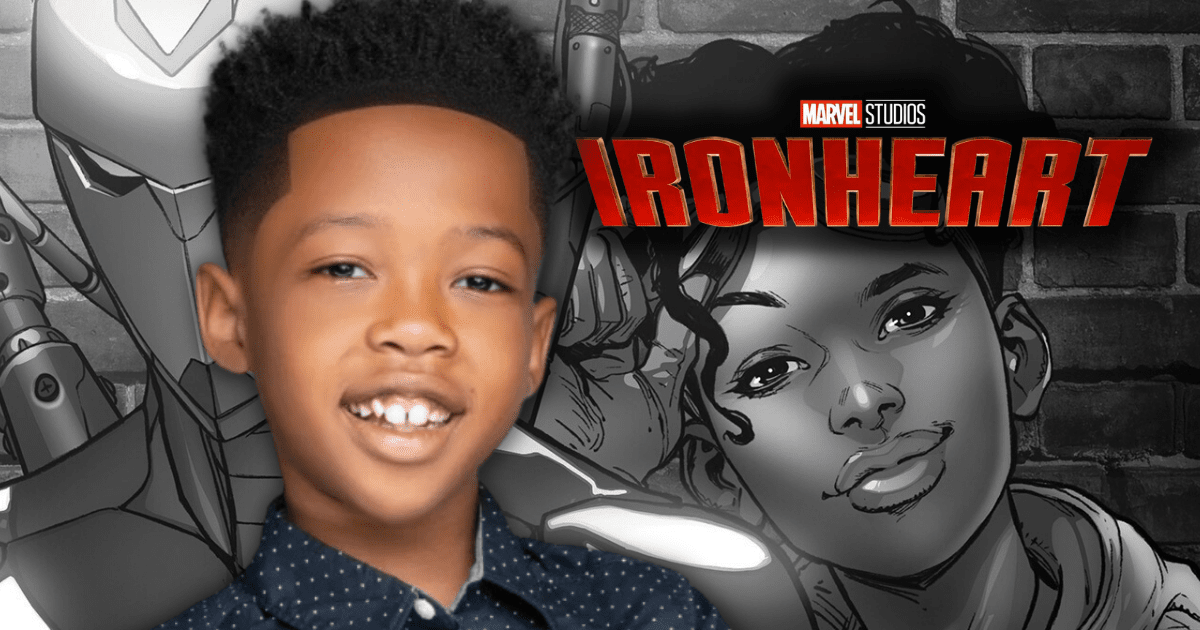 Harper Anthony has an impressive academic and modeling resume and has recently built up his acting resume. In 2021, he was a guest star on the NBC medical drama Chicago Med. He’s also been in several independent streaming projects.

Harper leaped to the forefront of the national spotlight in 2019, when he was 6, after a powerful image he was in went viral. The photo featured him clad in a suit, with his fist raised. Standing behind him were a crowd of men, also raising their fists in unity. The image was shared by Diddy and Common.

Interestingly, Harper is from Chicago. Ironheart’s story and comic origin are closely related to the windy city, so it will be great to see any Chicago authenticity that the young actor brings to the role. There is already some speculation he may be playing a younger brother to Riri.

Harper joins several other actors already cast in the series. Lyric Ross is rumored to play Ironheart’s best friend. She was recently on NBC’s This is Us. It’s unclear whether she will be Natalie/N.A.T.A.L.I. E. from the comics or an original character.

In addition, last February news broke via Deadline and THR that Anthony Ramos was cast and potentially going to play a villain in the Disney+ series.

Pre-production for Ironheart has been ramping up as the show gets closer to an expected June start date for filming. Chinaka Hodge will serve as the show’s showrunner and lead writer. The show uses the working title “Wise Guy” and the production company “Bad Egg Productions, LLC.”

Marvel is Casting a Transgender Character in Ironheart

Last week, POC Culture reported that Marvel would introduce their second-ever transgender character in Ironheart. (The first character appeared in Spiderman: Far From Home and was played by actor Zach Barack.)

According to the POC Culture report, in Ironheart, “the character is portrayed as she/her, is around 18-22 years old, and is a Black, Latina or Afro-Latina transgender woman.”

Furthermore, there were some fascinating details about the character’s background. According to their casting scoop, Ironheart’s new “character will be smart, confident, and with a mystical bent and unique sense of humor. She’s also described as unapologetically nerdy about things that excite her…even if they might be terrifying to others.”

Given Marvel’s push into the world of magic and supernatural with the upcoming Doctor Strange in the Multiverse of Madness movie, the word “mystical” certainly stands out in this casting notice.

Riri Williams is Ironheart. First introduced in the comics in a small role in Invincible Iron Man (Vol. 2) #7, written by Brian Michael Bendis. She’s a genius (sure to become one of the smartest in the MCU) who grew up in Chicago and went to MIT at 11 years old.

Riri Williams gained superhero notoriety when she reverse engineered and improved the Iron Man Mark 41 suit while a student at MIT. Her amazing brain is her superpower – she uses it to fabricate the items that help her do good in the world, much like her namesake, Tony Stark, aka Iron Man.

When will we meet Ironheart?

Thorne will debut as Ironheart in the upcoming movie Black Panther: Wakanda Forever. Last year, The Cosmic Circus reported that Thorne was spotted filming as Riri Williams outside of MIT’s Stratton Student Center for a scene in the movie. A few weeks ago, Thorne posted an Instagram story about wrapping her filming for BP2.

Interestingly, Black Panther 2 director and writer Ryan Coogler is said also to be involved with the production of Ironheart.  Coogler’s involvement with Ironheart is perhaps an indicator that whatever happens storywise in the movie will have ramifications for Williams in the show and in the greater MCU.

What do you think about Ironheart? Do you have any guesses about Harper Anthony’s character? Are you excited to see the character debut in Black Panther 2? Please share your thoughts in the comments or with us on Twitter @MyCosmicCircus.

And if you like what you just read, please consider subscribing to our Patreon!