As we go to our Local Comic Shops for our yearly dose of free stories (seriously, search for your local store now!), here is a handy guide to help you get acquainted with the world of comics.

A comic is a story told through static pictures with text, usually in series with other comic issues. Monthly comics are like a TV show where one episode is published every month until it eventually ends. Some series can last 5 issues, and some have lasted for over 1000! 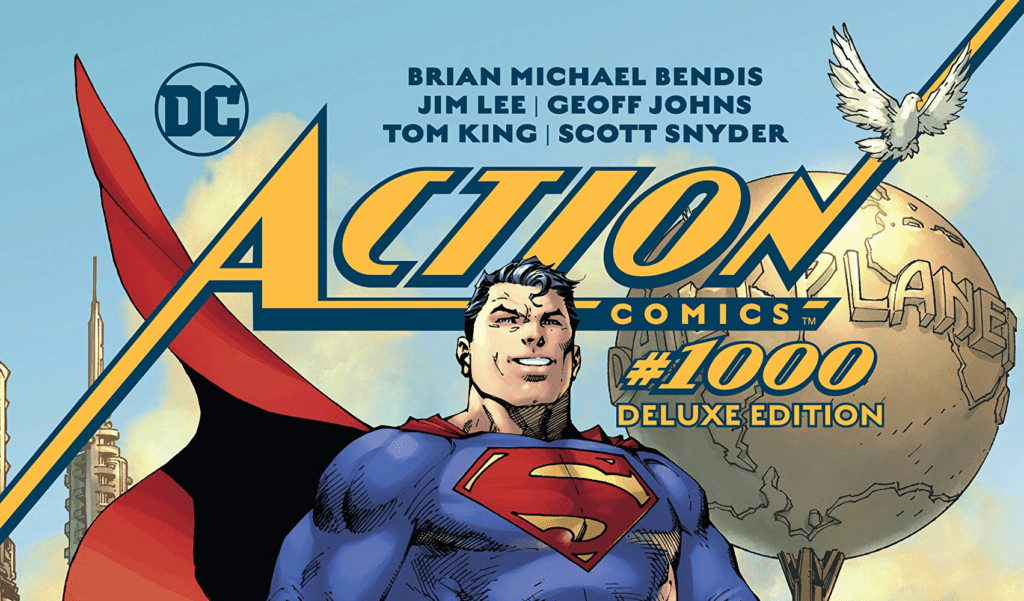 To handle the big numbers, companies like to occasionally “reset” to #1. This is similar to revival shows on TV. Usually the story continues, but in a way that new readers can comfortably join as well.

Renumbering to #1 is the easiest way for new readers to find easy starting points, so be on the lookout for those #1s! Don’t be confused by them – remember that these are like different series of an ongoing TV show, and all series start with an episode 1.

You can read the issues monthly as they come out, or wait for a collected set once the story is done (like waiting for TV episodes to be collected on DVD). The collections are called a “trade paperback,” “trade” or “tpb” for short.

Usually a simple trade would be titled something like Batman: The Court of Owls, and the back cover will say “Collecting Batman (2011) #1-6.” This tells you it has issues 1-6 of the series that started in 2011, and the title “Court of Owls” tells you the name given to the collected storyline. But like DVDs of a TV show, the comic still continues after this! So after reading this collection, you should look for a trade that has issue #7 and continue the story from there.

Sometimes you’ll find the same issues collected in different ways. For example, the “Batman by Scott Snyder & Greg Capullo Omnibus Vol 1″ collects Batman (2011) #1-33. That includes the same #1-6 we talked about before, and the 27 issues after it! This is like a giant box set of older DVDs, sold all in one convenient set. It’s the same comics, just in a new package.

Sometimes publishers even make “playlist” collections. This is like if The Flash TV show released a DVD called “Flash: The Captain Cold Collection” with all their favorite Captain Cold episodes. In these kinds of sets, you can find issues from history that are all related to a topic or theme but aren’t necessarily from the same storyline or author.

Just like with DVDs, “playlist” collections like this aren’t common in comics but they’re fun when they come! Think of them more like a short story collection rather than a novel.

And of course, comics have crossovers. To follow these, you could find the trade for each comic that ties into the event you’re interested in, or you could simply look for a special crossover collection that collects them for you.

For example, there could be a Court of Owls Omnibus that would collect not just Batman’s “Court of Owls” chapters from above, but also the Batgirl, Nightwing, and Red Hood chapters that also tie into the Court of Owls storyline.

Even though the main Batman series is enough for the basic story, this kind of collection is the ultimate way to follow the whole story along with all the side characters. Like before, this is just another way the same comics can be collected and repackaged.

Tie-in events can also be difficult if you don’t care about them. Sometimes you might be reading Batman and suddenly one of the Robins is dead because of another event! I chalk that up to bad writing and an unfortunate turn of events. A good comic writer should explain the relevant things happening outside of their book that tie into it. To be careful, always consult a reading guide before starting a long series.

For example, this is the reading order for the Rise of the Midnight Sons crossover in the 1990s. It’s messy, but the guides are here to help!

The main message is that comics are a series of never-ending stories set in a shared universe. That can be intimidating because there’s so much, but if you use a guide to jump in at the right moment and take it one story at a time, then it’s as simple as watching classic TV one episode at a time. You just start somewhere and learn the characters as you keep watching. Then you can go back to the earlier stuff anytime you want to catch up.

I hope this article helps you understand how to follow your favorite titles. Please find me on Twitter (@vinwriteswords) if you have questions and check back in to The Cosmic Circus (@mycosmiccircus) for more comics content coming soon!

To find some great jumping-on points, check out our ever-growing reading guides for your favorite characters!