‘House of the Dragon’ SDCC 2022: A Preview Of Things To Come ‘House of the Dragon’ SDCC 2022: A Preview Of Things To Come

After a three-year hiatus, the world of Game of Thrones will reappear this August in HBO’s new anticipated series House of The Dragon. To promote the series, the entire main cast ventured to SDCC this year to deliver the first Thrones universe panel in three years.

An extended trailer was shown to the Hall H crowd, then subsequently released online to the general public. The trailer showcases what the Targaryens are all about, Fire and Blood. After the trailer played, the cast came out for a panel that lasted around 45 minutes or so. There was not a great deal of new information given. The actors mainly described how they felt playing their characters.

“I think Rhaenyra is fueled by that old Targaryen stuff and I think the journey she goes on in the series is when to let that fire burn and when to dampen it.” – Emma D’Arcy #HOTDSDCC

The show, while venturing back to Westeros, will take place during a much different time period. This is ultimately a show about the Targaryens and how their massive dynasty begins to collapse. The showrunners have explained in the past, that we will come to learn why this story is important to tell. For some, it appears to be another classic attempt at a prequel, while the showrunners look to prove otherwise.

The Dance of Dragons is a pivotal time in Westeros that we never see in Game of Thrones, just like Robert’s Rebellion. The story that comes to pass will very much so be centered around Rhaenyra Targaryen (Emma D’arcy) and Alicent Hightower (Olivia Cooke). The early seasons will likely do as Thrones did, laying the groundwork for the show to develop into a real story. 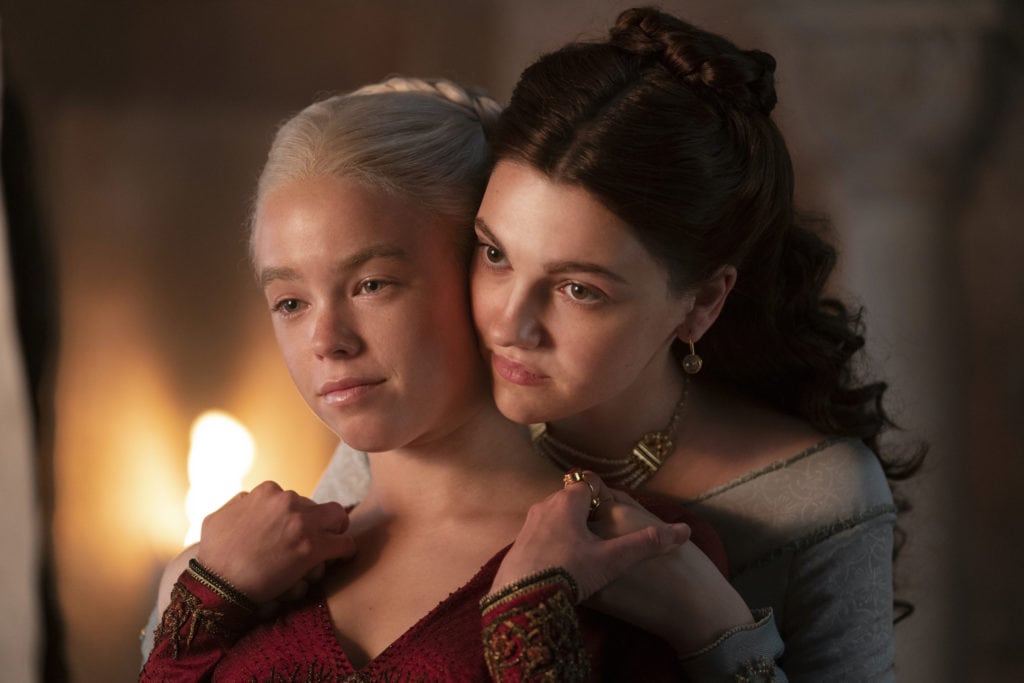 In Game of Thrones, Jon Snow and Daenerys Targaryen played somewhat of a background role in the early seasons; in the end, we learn all along the story had been about both of them. House of The Dragon will mainly take place in King’s Landing. This paves the way for Rhaenyra and Alicent to come into play much earlier than Jon and Daenerys did.

While the real story has not yet been revealed in trailers, we do see a glimpse of the impending feud between Rhaenyra and Alicent. Alicent appears to attempt to stab Rhaenyra in a pivotal scene in the trailer.

One can assume from the footage we have seen, that season one will show the contrast between Rhaenyra and Alicent’s friendship. Showing the time when young Rhaenyra and young Alicent were great friends, to a time when they let their ambitions destroy the relationship they had.

As learned in Game of Thrones, while the show can center around two people, there are still plenty of other stories to tell. Over the course of this series, we’ll discover what other characters’ journeys look like. Daemon Targaryen will likely be just as important as any character due to Matt Smith coming on board to play the role.

“Once I played The Doctor I was actively looking to play something different.” Matt Smith #houseofthedragon #HOTDSDCC

Eve Best was brought onboard to play the role of “The Queen who never was” Rhaenys Targaryen. The story of Rhaenys will be an interesting one for fans. It will likely be an inspiration point for Rhaenyra’s journey throughout the show.

House of The Dragon looks to give Westeros a chance at redemption after Game of Thrones‘ final season was widely viewed as a failure by many fans. With the show focusing strictly on the Targaryens and dragons, it will give fans exactly what many want because apparently there will be a total of 17 dragons at one point in the show.

“The most interesting characters are gray characters… all of these characters have good and evil in them and it’s all about the choices they make.” George R. R. Martin #HouseoftheDragon #HOTDSDCC

Overall, House of The Dragon has a chance to be another special story to come out of the land of Westeros. The series airs on HBO and HBOMax beginning August 21st.

Watch the full House of the Dragon SDCC panel below!