Awesome Con has come and gone this past weekend in Washington, DC. The panels are done and the cosplay costumes are packed away until another day. On Friday, Hayley Atwell spoke to a full audience at the Main Stage in the Water Washington Convention Center.

Atwell shared exciting details about her stunt work and training in the upcoming Mission Impossible movies, but what was also interesting were her thoughts on possibly returning to Marvel and the character of Peggy Carter in the future.

[Warning: Spoilers from Doctor Strange in the Multiverse of Madness are below!]

The actress recently took up the mantle of Captain Carter as a member of Earth-838’s Illuminati in Doctor Strange in the Multiverse of Madness. Atwell’s Carter dramatically battled the Scarlet Witch (Elizabeth Olsen) with a seemingly final ending for the Captain. But that doesn’t mean she couldn’t return to the MCU again as another live-action variant of the character.

And of course, last year Atwell voiced yet another variant of Peggy Carter/Captain Carter in the animated series What If…?. 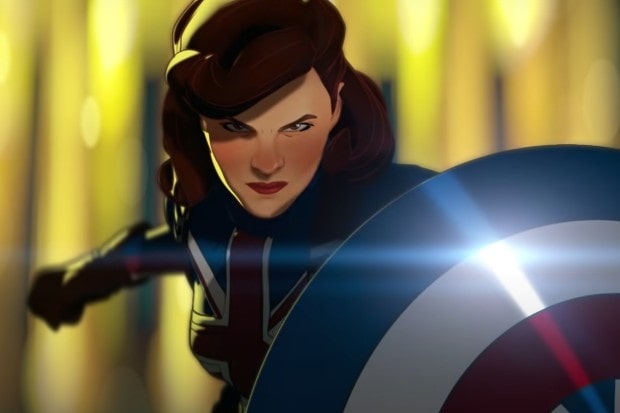 At the Awesome Con panel, an audience member asked Atwell, “What is the chance you come back in the next phase of Marvel as Agent Carter or Captain Carter?” In return, Atwell posed the question to the audience, who gave a tremendous cheer at the idea of her return.

Her response after the cheer was thoughtful – Atwell is enthusiastic about returning, but it has to make sense for and be worthy of the character.

HA: Well… I haven’t got news for you. But I share your enthusiasm. And I would love to if Marvel did find a home for her; that’s a home that feels worthy of her in terms of her evolution as a character and development as a character.

The experience I’ve had in playing her has given me the most incredible opportunity to hone my particular craft in this franchise. And I’ve got more to do, and because I feel the fans deserve that. In some ways, with a lot of people, she’s a minor player, and it wouldn’t make sense if I was to continue to be a minor player in that if it felt like, well, this is a different time.

And also particularly as a woman with everything that’s happened the last few years. When she says in her timeline, “I know my value and everyone else’s opinion; it doesn’t matter,” that’s really good. But I want everyone to realize her value. In the same way, essentially her own self-esteem and sense of dignity comes from that sense of she knows her worth, she gets on with the job, and she just works for the sake of work with dignity and she knows it. She doesn’t need validation.

But there is one thing that she deserves, which is agency in the world, and that can’t come until certain people in positions of power, namely the men, cede her power and offer her that platform. And so, I’d like her to have that opportunity because then I feel like I have something much more interesting to offer you guys.”

Judging by the audience’s enthusiasm at the panel, there’s undoubtedly an appetite for more of the character. Fans are still waiting for a definitive answer as to whether or not Agent Carter, the 3-season ABC series that centered Peggy Carter and her work for the SSR with Howard Stark (Dominic Cooper) and others, is cannon.

You can catch the latest appearance of Hayley Atwell as Captain Carter in Doctor Strange in the Multiverse of Madness in theaters now or on Disney+ on June 22, 2022.

Do you want to see Captain Carter return to the MCU? What’s the next evolution of the character? Please share your thoughts with us on Twitter @MyCosmicCircus.