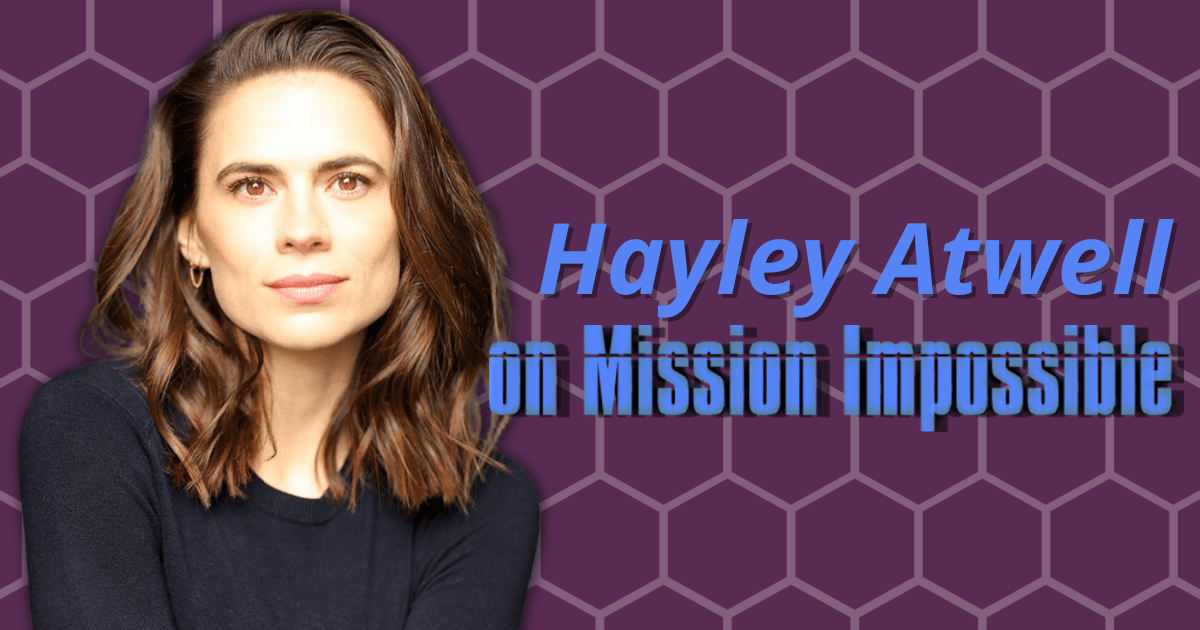 This past weekend fandom from the greater Washington, DC area descended on the Walter E. Washington Convention Center to celebrate their passions at Awesome Con. There were comics and cosplay and a ton of exciting events. And of course, there were incredible workshops, but some of the most interesting information came from the celebrity panels, including from Marvel and Mission Impossible 7 actress Hayley Atwell.

On Friday, at the Awesome Con Main Stage, Atwell spoke to a full audience and took questions about her career and upcoming projects. Of course, fans asked about her iconic Marvel roles and any plans to take up the mantle of Peggy Carter and Captain Carter again after Doctor Strange in the Multiverse of Madness. Atwell shared her thoughts about what it would take to return to the character (which you can read in my report here). But there were also questions about Atwell’s role in the upcoming Mission Impossible: Dead Reckoning movie.

Atwell is playing a character named Grace, and we recently got our first glimpse of her at the release of the trailer for the Christopher McQuarrie helmed movie (below). The trailer, as is the tradition with Mission Impossible trailers and films, shows Tom Cruise’s Ethan Hunt globetrotting and doing seemingly impossible stunts. The action sequences take your breath away, particularly the shot of Cruise motorcycle jumping off of a mountain.

Atwell’s character, Grace, has been shrouded in mystery since the actress was cast in the movie. An Instagram post from filming in August of 2021 hinted at the name Grace, although fans didn’t realize it at the time.

Atwell on her Mission Impossible 7 character

HA: What I can say my role is that her name is Grace, that’s out there… She’s a joy to play, she’s mischievous, and she’s playful, and she holds her own with him, and there’s a kind of comic element to it, which is great. Which we haven’t seen as much of in Mission 4. It has a different tone to it.

On stunts and training for Mission Impossible 7

HA: It blows my mind. Every day on set, going, “What am I? What am I doing today? What am I jumping off of?” So I trained for five months full time. I had an Olympic martial art expert who trained me in mixed martial arts, foundation techniques to work out where my natural sort of abilities lay, to develop a fight sequence for my character that would be tailored to my own strengths.

And then I was, we were running because at one point the trainer said you will be running beside Mr. Running Man, and when he runs, he runs with every single cell of his being, and I’m like, “Are you running away from a bear?” What he’s running from and what he’s running to, I’ve never seen anything like it. It’s just this surge of energy. So I was having to train to make sure I have some attempt to catch up with him.

HA: And in terms of stunts… I learned how to drift a race car. Every time a friend gets into the car now, and I give them a lift, they’re like, “Please, we’re just going around the corner, please, abide by the rules.”

On working with Tom Cruise

HA: Yes, we are, swinging out the back of the car there. And the other thing is we… backflipped over a bridge, jumped backwards off of a moving train, and a lot of running uphill in high heels while handcuffed to Mr. Cruise. That’s all I will say.

But his dedication to creating these extraordinary spectacles for the audience it’s entirely for you guys. His determination to not stop until it’s absolutely pitch-perfect so that you guys come away from it feeling totally exhilarated by it. It’s amazing to see that every single day. He shows up.

And it was a great lovely experience for me of the general spirit that he carries onto a set and that he has time for his fans, and he really does. I find that very moving and heartening to watch, and so I’m learning from the great man himself.

On waiting for the film’s release

HA: But you’re in for a treat. We’ve got about a year to go, and the reason is that the film’s got to be perfect and we won’t release it until it’s ready. And it will be worth it so you will enjoy it.

What did you think about the Mission Impossible: Dead Reckoning – Part One trailer? Are you excited about the return of Ethan Hunt and the MI debut of Hayley Atwell? Please share your thoughts with us on Twitter @MyCosmicCircus.