Great Gifts for ‘Doctor Who’ fans 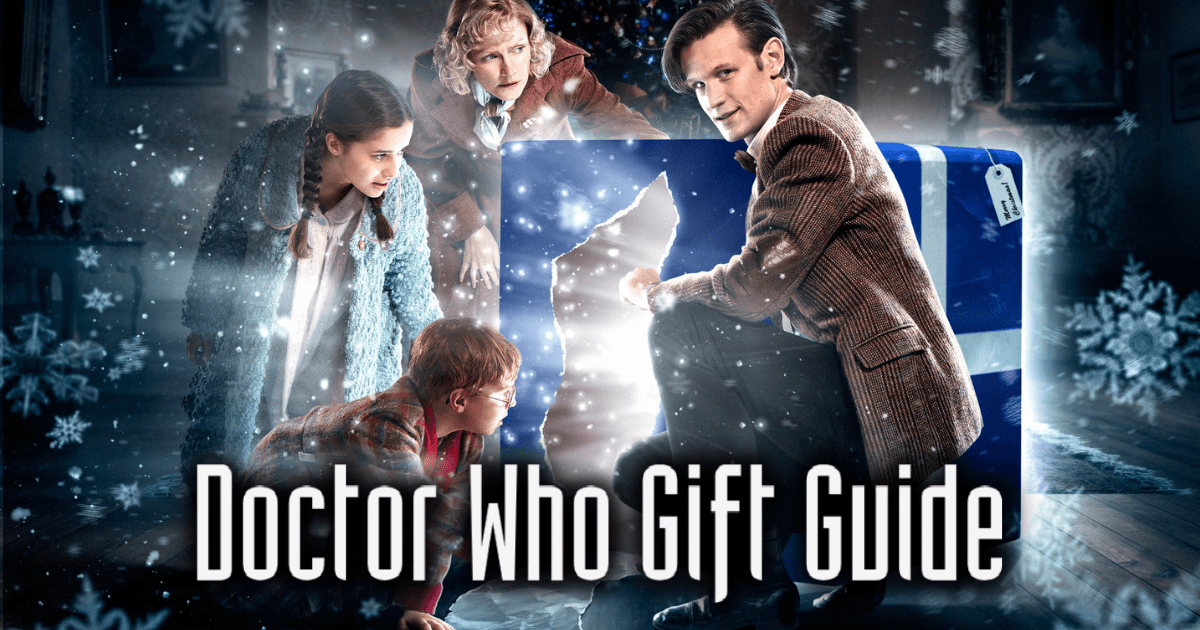 Great Gifts for ‘Doctor Who’ fans

Looking for that perfect gift for your nerdy family member who is obsessed with Doctor Who? Well step inside my Santa workshop and let the elves and I guide you in making the perfect selection. Although before we arrive at the right present, there are a few questions we have to stop and ask ourselves. Is the person we’re buying the gift for a fan of classic Doctor Who or the revival era? Who is their favorite Doctor? And just how big of a nerd are they?

Do you have all those answers? Great! Let’s dive into some ideas for great gifts for Doctor Who fans in your life.

Gifts for Doctor Who fans of the revival era

One of the nice things about Doctor Who is that there is plenty of seasons to choose from if you want to get them a season or collection as a gift! If you’re looking for something from the NuWho era, there are plenty of options to choose from.

While there are many Doctors in the revival era, you can’t go wrong starting with Christopher Eccelston and his companion Rose’s (Billie Piper) season, which kicked off Doctor Who’s return after a long hiatus. This season is the best place to begin a Doctor Who re-watch and is essential for any collection. Available on Amazon and other stores on DVD and Blu-Ray.

Not quite what you’re looking for? No worries, there are plenty of other fantastic Doctors to come, with iconic episodes and favorite companions. Following Eccelston was David Tennant, who played the alien with two hearts for three seasons and a collection of specials.

Each season of Tennant’s run featured a different companion who brought something unique to the series. Doctor Who fans would be ecstatic to have any of these seasons on disc, however, Tennant’s series are also bundled together in a fantastic set, with plenty of bonus features. Available via Amazon and other stores on DVD and Blu-Ray.

Matt Smith took over as the Eleventh Doctor, showing a more playful side of the Doctor, spanning three seasons as well as a few specials. Joining him is Amy Pond (Karen Gillian), Rory (Arthur Darvill), and the Doctor’s wife River Song (Alex Kingston) in the Eleventh Doctor’s earlier seasons, with Clara Oswald (Jeanna Coleman) joining near the end of Smith’s run. Available via Amazon and other stores on DVD and Blu-Ray (season 5, season 6, & season 7).

Peter Capaldi is the second to last Doctor with previously aired seasons. His version of the Doctor is a bit more grumpy and old man-ish compared to Smith’s youthful and joyful iteration. Clara Oswald continues with her journey in the TARDIS, though passes the baton to Bill (Pearl Mackie) for Capaldi’s final season.

Capaldi’s tenure as the Doctor was also the end of Steven Moffat as showrunner, who began in this role on Doctor Who along with the eleventh Doctor. Available through Amazon and other stores on DVD and Blu-Ray (season 8, season 9, & season 10), and his final special, Twice Upon a Time.

The most recent Doctor is Jodie Whittaker, who has also played the Doctor for three seasons and a series of specials to close out her time. The Thirteenth Doctor journeyed through time and space with her fam, consisting of Yaz (Mandip Gill), Ryan (Tosin Cole), and Graham (Bradley Walsh), with Dan (John Bishop) coming on in the final season to replace the latter two.

The Thirteenth Doctor is available via Amazon and other stores on DVD and Blu-Ray (season 11, season 12, season 13) along with Doctor Who: Revolution, Doctor Who: “Eve of the Daleks” and Doctor Who: “Legend of the Sea Devils” bundled together, and Whittaker’s final episode “The Power of the Doctor” which releases on December 13. Right in time for Christmas!

Perhaps you want to think outside the blue box a bit and find something from Doctor Who that maybe the individual hasn’t seen. With a show that has been around for almost sixty years, there is a ton of material to choose from.

Classic Doctor Who episodes are available from Amazon and other stores on DVD and Blu-Ray.

With such an expansive universe, there are a ton of books and comics from over nearly sixty years. It would be almost impossible to cover them all, so for the sake of this gift guide, we’ll just highlight a few!

Titan Comics has a great selection of Doctor Who offerings for you to choose from. There are so many great adventures from many of the Doctors, in either individual issues, collected paperbacks, or hardcover year editions. It’s hard to choose which one to read first, believe me, I’ve struggled to decide.

I personally love the Doctor Who Titan Comics, because it helps fill in some of the gaps between seasons and episodes, while also having the same energy and excitement that the series has. Titan Comics Doctor Who series are available from Amazon or Titan’s Webpage.

If you’re looking for a novel instead of a comic or graphic novel, Doctor Who has a ton of them. The Target collection is a series of Doctor Who novelizations of episodes from across the 60 years. Some have additional scenes added to them, enriching the stories even more.

You can pick a novel featuring your nerdy friend’s favorite Doctor, or try one they are unfamiliar with! Like a Doctor Who-sized sample that could open up a whole new universe for them! Doctor Who Target Books are available on Amazon and other stores.

Perhaps you’re looking for something that combines a bit of everything for the Doctor Who fan on your gift list? Then look no further than Time Lord Victorious! This is an event that crosses over between novels, comics, and audio dramas, bringing together multiple doctors in this epic story.

There is a ton of material in this event, but any piece of it will be a fantastic addition to someone’s collection. Time Lord Victorious can be found on Amazon and other sellers.

Outside of books and movies, there are plenty of other gifts to consider when making your choice. Maybe your want to get something more of a collectible, or a game you can play with this individual. Here are a few ideas.

Funko has an extensive line of Doctor Who vinyl figures, featuring almost any character you can imagine. Want to get them a Doctor? Which one, there are so many. There are companions and even monsters from the sci-fi series as well, meaning you can mix and match which ones to curate for the collection.

Funko Pops are super cute, relatively sturdy figurines, which is a fun way to represent your favorite fandoms. I’m a huge fan of Funko Pop dolls and find myself wanting to collect as many of my favorites as possible.  Doctor Who Funko Pops can be found on Amazon and other stores.

The game Fluxx has a Doctor Who edition, which has been a favorite of mine for years. Fluxx is a game where the rules and objectives are constantly changing, meaning that to win, you constantly have to think on your feet. The standard game comes in a nice little box for safekeeping, although doesn’t include the 13th Doctor. An expansion featuring Whittaker’s Doctor was released, adding even more fun to an already exciting game.

Fluxx: Doctor Who edition can be found on Amazon and Looney Labs.

My last recommendation is a new video game that was just released in November for the Nintendo Switch but is also available for PS4 and Xbox One. It’s two games in one, The Edge of Reality and The Lonely Assassins. The Edge of Reality features Whittaker and Tennant’s Doctor who have to venture into the Choasverse to save all of reality.

The Lone Assassins is a continuation of the fan-favorite episode Blink and features Unit scientist Osgood. Both games together would give the Doctor Who fan in your life so much joy and time immersed in the world of Doctor Who. The Doctor Who Duo Bundle is available on Amazon and other stores.

While I have presented quite a few options to consider for that perfect Doctor Who Christmas gift, there are so many many more wonderful things from which you can choose. The thing to remember is that if this individual in your life loves Doctor Who, they are going to love whatever gift you pick out for them.

What do you think of these great gifts for Doctor Who fans? I hope you consider one of these as you complete your holiday shopping this season! Let us know on Twitter or social media what Doctor Who gifts you’re considering for a loved one in your life!

The Most Bizarre Doctor Who Stories