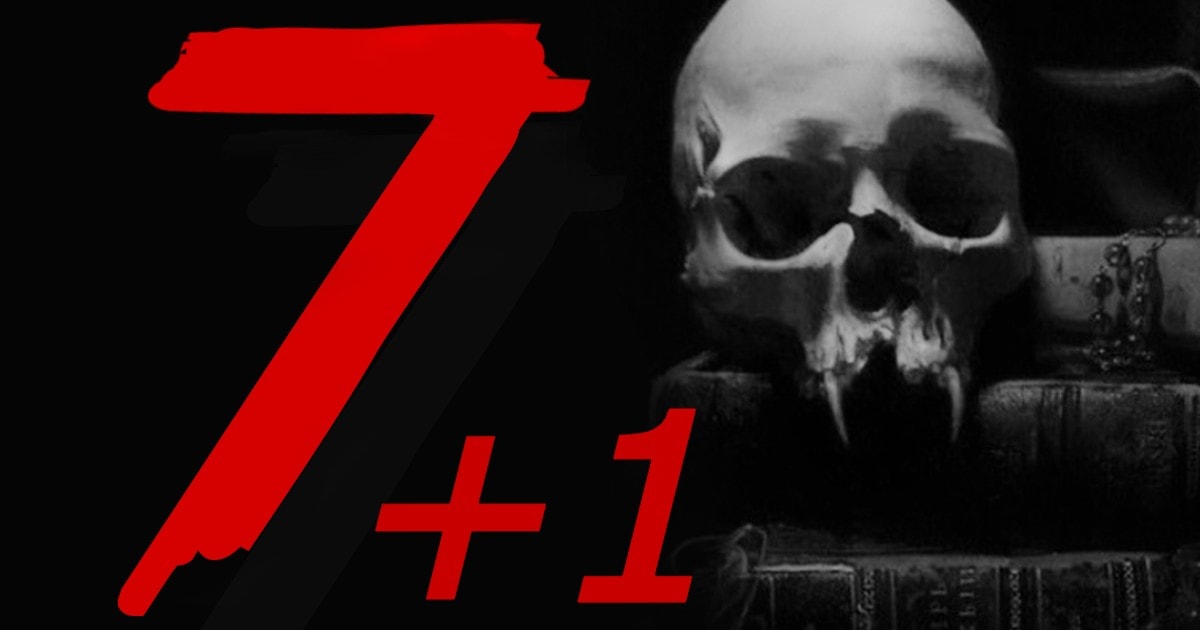 Welcome to part three of Vin’s Vampire Ventures! If you haven’t read the first two parts of my sinister series, don’t be afraid to check out part one (2021-2022) and part two (2023-2024) covering upcoming vampire movies. The full set can be found here.

As you might remember, I’ve been sinking my teeth into twenty-two vampire films that are expected to arrive in the next three years. The previous articles tackled seven titles each, but here is the third and final set with not seven, but eight upcoming movies, all expected for 2024 and beyond. Prepare your calendars and watch parties now, cause these are going to rock with friends!

Not much is known about the upcoming Van Helsing reboot, other than the fact that it’s “an original horror/thriller” about the famous monster hunter created by Bram Stoker in his original Dracula novel. Universal Pictures previously tried to launch a Van Helsing franchise in 2004 with Hugh Jackman as the lead. Even though that film flopped, the studio has allegedly continued to view the property as a top priority in the 17 years since.

Julius Avery (Overlord) is directing and writing, based on an original draft by Eric Pearson (Black Widow, Godzilla vs. Kong), with James Wan producing. Deadline notes that this could be a dark, R-rated interpretation, which lines up with Wan’s previous producer-only film credits in the Mortal Kombat, Conjuring, and Saw franchises. Coincidentally, Syfy’s Van Helsing show featuring “Vanessa Helsing” just finished its fifth and final season, so that might be worth a watch while we wait for Avery’s film to release. 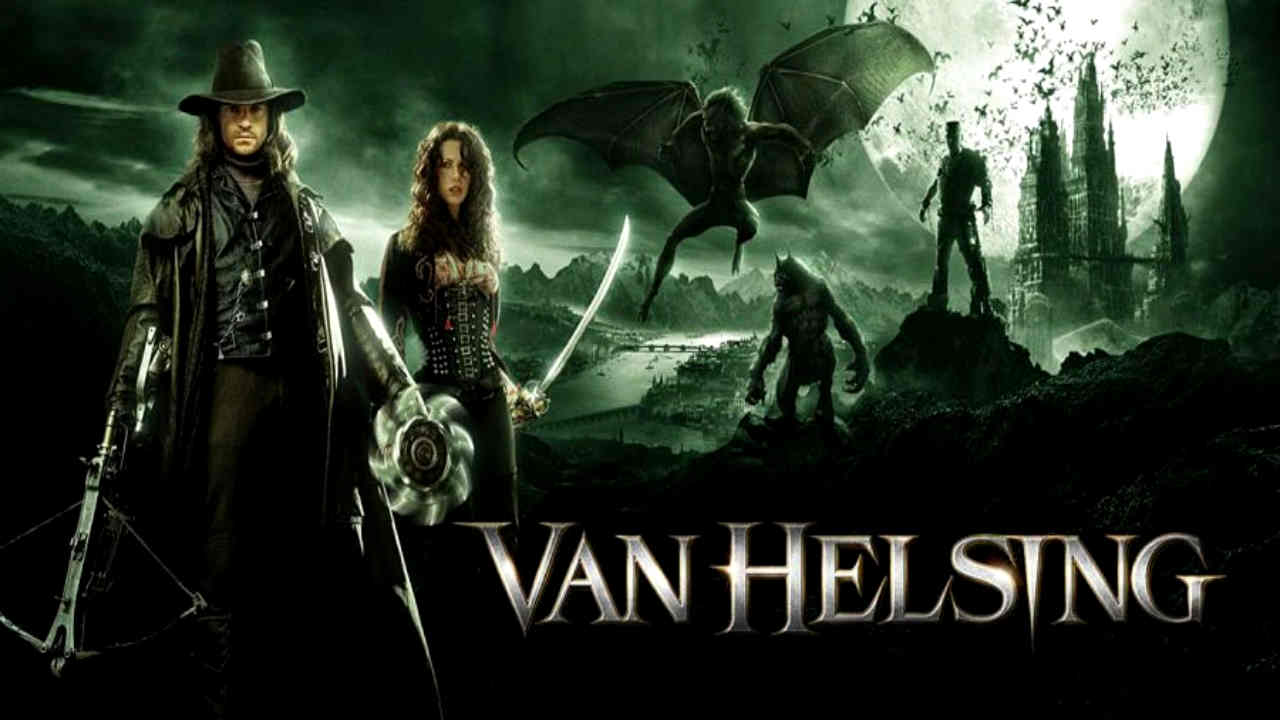 Another Van Helsing project, Abraham’s Boys will be a sequel to Bram Stoker’s novel, written and directed by Natasha Kermani and based on a short story from Joe Hill (Locke & Key, The Black Phone). The film is expected to follow Max and Rudy Van Helsing, whose overprotective father starts to become bizarrely paranoid and erratic. Interestingly, the contemporary drama is set to “explore the boys’ trauma” from the perspective of “a young Asian woman who is no stranger to death.” While little else is known about Abraham’s Boys just yet, Kermani’s latest film Lucky was a huge horror hit on Shudder this year. So if you’re interested, you can check out Joe Hill’s story and Kermani’s film to get a taste of what to expect!

A modern reimagining of the 1972 classic of the same name, Deon Taylor’s Blacula is also expected to “pick up” from 1973’s Scream Blacula Scream. Whether reboot or soft sequel, the upcoming Blacula will definitely be a timely take, as the story will reportedly be set in the aftermath of the coronavirus pandemic. Like in the original movie, Blacula will be an African prince entombed by Dracula for trying to stop the slave trade. Reawakened in the modern-day, Blacula seeks vengeance for America’s racial injustices of the past 200+ years. The filmmakers are hoping that the film will appeal to audiences around the world and open important dialogues. Blacula (1972) was a blaxploitation horror classic that basically launched an entire subgenre, so if you haven’t seen it yet, you should hunt it down to learn what Blacula is all about!

The Hunger is a book adaptation announced by Berlanti Schechter Productions for Angela Robinson (Professor Marston & the Wonder Women) to direct from a script by Jessica Sharzer (American Horror Story), although the script has yet to be written. Berlanti Schechter Productions signed a first-look deal with Netflix in July 2021, so this may be a straight-to-streaming release.

Little is known about Robinson’s take on the film, but an earlier film adaptation in 1983 is a cult classic erotic horror starring Catherine Deneuve, David Bowie, and Susan Sarandon. A bisexual vampiress (Deneuve) uses the blood of her victims to live thousands of years alongside her handpicked human partners. Although she promises them immortality, it does not come with eternal youth, dooming her lovers to an eternal life of pain. When her current boyfriend (Bowie) starts rapidly aging, he seeks out a scientist who studies aging (Sarandon). Naturally, things only get more complicated as the film evolves into a gothic tale of queer empowerment.

Robinson and Sharzer teaming up to remake this sound like a really fun, twisted R-rated horror flick! Be sure to also check out Professor M and American Horror Story: Hotel to get an idea of what to expect, but please note that both have a hard R / TV-MA rating.

Just before becoming an Oscar superstar this spring, Chloé Zhao announced that she would be writing, producing, and directing a Dracula movie in the vein of a “futuristic sci-fi western.” Sci-fi westerns aren’t an unfamiliar concept, having already formed their own subgenre with favorites like Star Wars, Back to the Future III, Cowboy Bebop, Firefly, and Westworld. Zhao said her inspiration was “the concept of the Other” that vampires embody, along with the quandary of immortality she began to explore in her current film Eternals. Universal Pictures additionally noted that Zhao’s film will focus on vampires as “overlooked and misunderstood” outsiders. It sounds like this project might be a ways away, so while we try to imagine what Chloé Zhao’s Dracula might be like, be sure to catch Eternals in theaters now!

Hellsing is an upcoming live-action manga adaptation written and produced by Derek Kolstad (John Wick, The Falcon and the Winter Soldier, Nobody). The original manga was a clever action-horror series following the immortal vampire Alucard, who is a reimagining of Dracula. Alucard operates as part of Hellsing, an England-based organization that protects the world against various supernatural threats. There was a 13-episode anime adaptation in the late 2000s.

The producers behind the project praised the manga for its quirky wit and the potential for building rich mythology. No director has been attached yet.

Hot on the heels of 2014’s horror sensation The Witch, Robert Eggers signed on to remake F. W. Murnau’s legendary Nosferatu (1922), with Anya Taylor-Joy (Last Night in Soho, The Queen’s Gambit) to star. The production partners are expected to be Studio 8 and Parts & Labor. Although the project has been completely put on hold, Eggers has been nothing but busy, having completed The Lighthouse (2019) and finishing the upcoming The Northman (2022) in the time since the announcement. Speaking to IndieWire, Eggers admitted that Nosferatu has a “very close, magical connection” for him and that his film would focus on the “origins of the folk vampire,” with the trademark approach that he applied in The Witch and The Lighthouse.

Taylor-Joy has been busy as well and recently told LA Times that she expects to start Nosferatu immediately after her other upcoming projects (The Menu, Furiosa, and Laughter in the Dark).

Update March 28, 2022: After being briefly attached, Harry Styles left the project. Eggers later confirmed that Styles’ role would have been Thomas Hutter, the human protagonist of the original 1922 film. Additionally, Egger’s usual cinematographer Jarin Blaschke was confirmed for the film, with plans to shoot in Prague.

Update September 30, 2022: After seven years, Taylor-Joy has finally left the project. Lily-Rose Depp was cast as her replacement and Bill Skarsgard joined as the titular vampire. The film is now set at Focus Features and producers include Jeff Robinov, John Graham, Eggers, Chris Columbus and Eleanor Columbus. A new synopsis reveals “In the new reimagining, Nosferatu is a gothic tale of obsession between a haunted young woman (Depp) in 19th century Germany and the ancient Transylvanian vampire (Skarsgard) who stalks her, bringing untold horror with him.”

Update October 7, 2022: After starring in Renfield, Nicholas Hoult is staying in the vampire realm by joining the cast of Nosferatu. It is unknown who he will be playing, but it’s reasonable to assume he will fill Harry Styles’ former role of Thomas Hutter.

David Lee Fisher (The Cabinet of Dr. Caligari Remix) and Doug Jones (Shape of Water, Pan’s Labyrinth, Hellboy) previously remixed The Cabinet of Dr. Caligari in 2005, augmenting the classic film with flourishes from modern technology to enhance the audio and visual experience. They updated the story structure, pacing, effects, sound design, and score, and conducted reshoots with new actors via green screen. In 2014, the team announced that they would be bringing the same approach to F. W. Murnau’s 1922 classic Nosferatu.

The team launched a Kickstarter with a goal of $60,000, eventually raising  $67,551 by April 2018, thanks to over 700 online supporters. Filming began in 2016, with post-production continuing even through the pandemic. A few BTS shots of Doug Jones in costume have been shared online, and a cut of the film was allegedly sent to the Berlin Film Festival in 2019 with completed post-production. However something must have gone awry, as Jones tweeted in March 2020 that the visual effects were “only a couple shots from completion” and that the “sound design/musical score” were also still being developed. As of February 2021, Jones still has not seen the film himself. 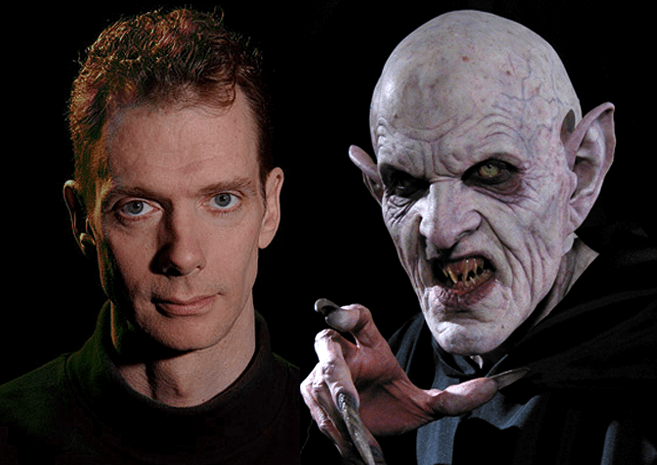 When promoting the Kickstarter in 2014, Fisher teased that he would be introducing dynamic camera movement and color to add “visual excitement” to the 1922 film. Fisher described his remix projects as “companion pieces” that help showcase the “magic” of the original films for modern audiences. Fisher gushed about his love for the “motion paintings” of the 1920s German Expressionist film design and how the filmmakers were “literally painting the hopes, fears, and internal workings of both the characters and audience.” Fisher expressed hope that his film would explore “love, nature, and sacrifice” even more deeply than Murnau’s original film.

Fisher also hinted that his vampire would be a destructive force of nature akin to an earthquake or a tornado, with no sympathetic concepts of “good” or “bad”. In contrast, Jones admitted in the same interview that he prefers to connect with the “tragic personal conflict” of “misunderstood monster characters” so his portrayal would likely “tap into the sympathetic” nonetheless, whenever it finally comes out.

Update March 13, 2022: Doug Jones tweeted that the film’s delay was possible due to legal issues. However, Jones remained optimistic that everything should be worked out in time for Nosferatu‘s 100-year anniversary before the end of 2022. 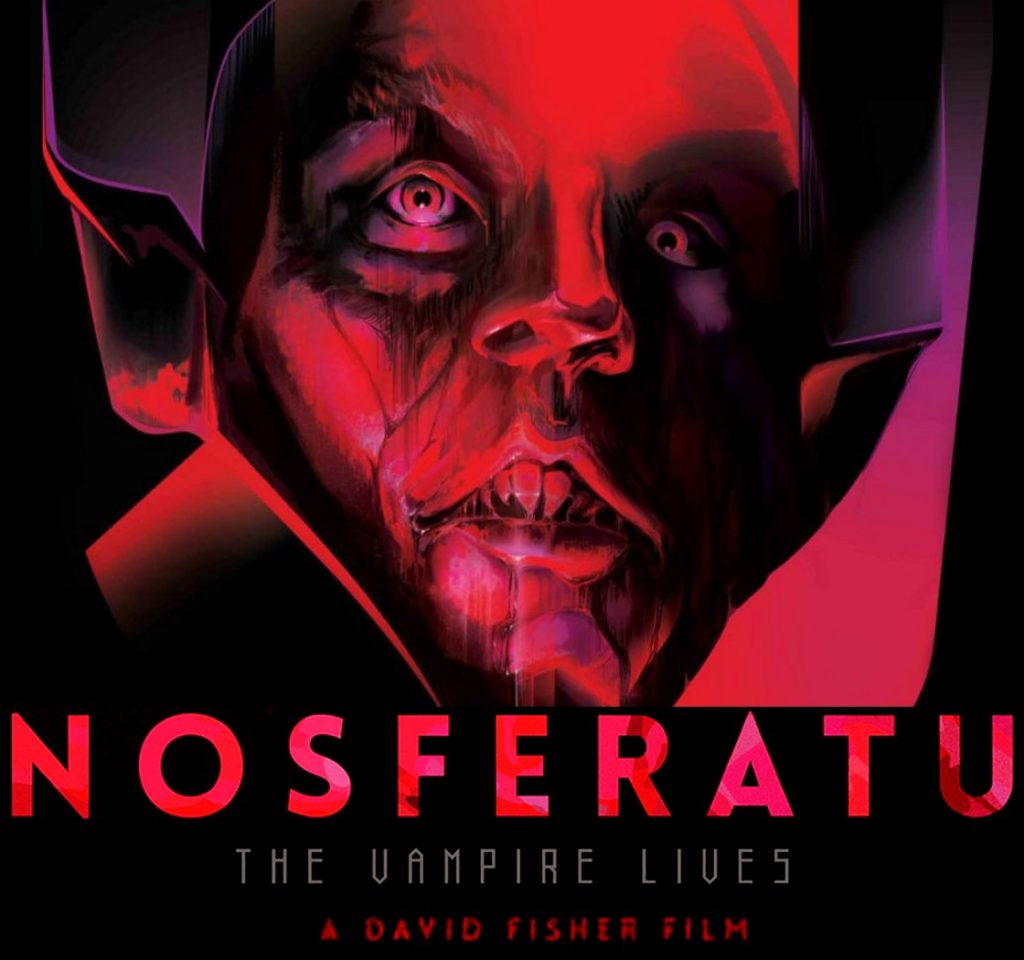 Announced in July 2021 by indie filmmaker Donavon Warren (Wheels), Vampire Apocalypse is a COVID-inspired take on vampirism. The site’s official synopsis reads “A small group of survivors must fight their way through a now vampire infested world,” with Warren also describing the film as a gritty drama about a father with an infected daughter. Shooting began at the end of 2021, aiming to release in 2023, with Warren as star, producer, writer, and director. Following Apocalypse, Warren has also announced a four-part time-travel/WWII series entitled Time Wars, set to release from 2024-2028. 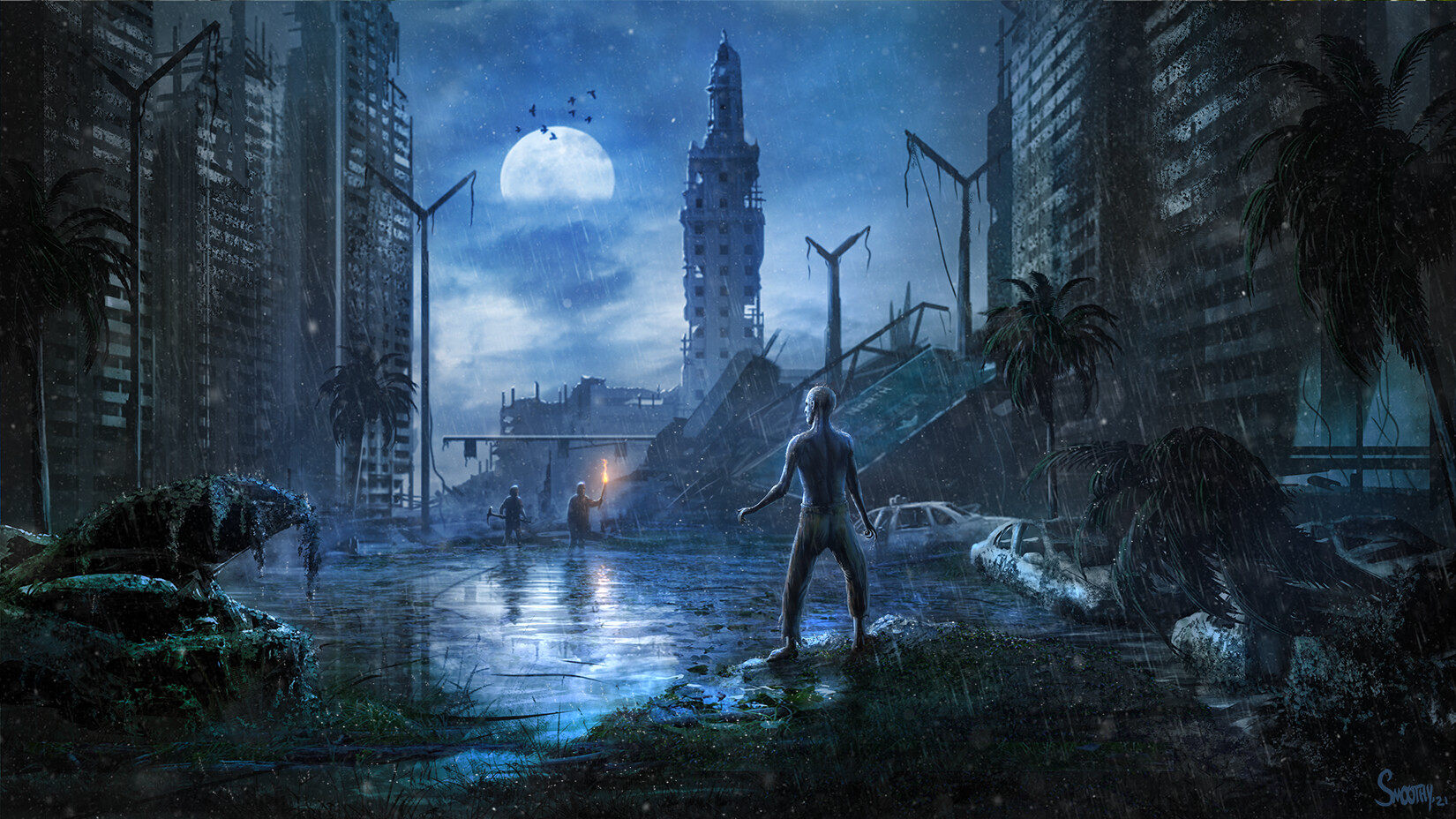 And those are all 23 upcoming vampire films! Of this third set, I think they all sound thrillingly unique. If I had to pick a few I’m looking forward to the most, I’d have to say Blacula, Zhao’s Dracula, Hellsing, Egger’s Nosferatu, and Fisher’s Nosferatu Remix. What sounds the coolest to you? What were your highlights from all 23 films? @ me on Twitter (@vinwriteswords) and let’s chat!

Find my other Vampires articles here!