Feige on Shang-Chi cast’s future beyond The Ten Rings Feige on Shang-Chi cast’s future beyond The Ten Rings

Although the film has yet to be released and only a few of us got a preview, Shang-Chi and the Legend of the Ten Rings seems to be setting its future up ahead of his debut. In an interview with ComicBook.com, Kevin Feige had this to say,

“We certainly have many ideas of where to take them and where to put them. And as exactly as you say, what’s so fun, we know the movie’s working when it’s not just the title character that people ask about, but it is the co-stars or the supporting players that people ask about. And in this movie in particular, that’s heartening because we think they’re spectacular, and we think they have great potential in the future.” With this insight from the one who knows all at Marvel Studios, it appears that Simu Liu is not a singular stand-out in his first film. Knowing the fame Awkwafina had attained before even being cast, Tony Leung’s well-tenured career, and then to top off with Michelle Yeoh’s involvement, it is inevitable that they all would find their place amongst audiences. Now the question is how Marvel Studios utilizes this great cast and their characters moving forward and what place they have amongst the grander MCM. Whether the next appearance of Shang-Chi is in another movie or appearing on Disney+, or a sequel to Shang-Chi and the Legend of the Ten Rings will remain to be seen. 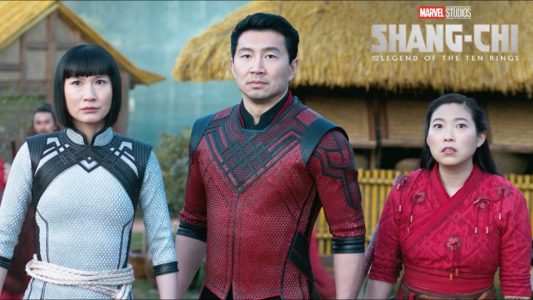 Shang Chi’s director (Destin Daniel Cretton) appears to have ingrained himself in the Marvel house rather quickly, adding:

“as you’re going down a road creatively, sometimes you get a little whisper in your ear… ‘I’m not sure if that would fit because of this and this though, so you might want to go in another direction,’ but that’s part of the fun of the process.”

When asked, Cretton mentioned that there was a setting he wasn’t able to use and hopes to get a chance in a future film (K’un-L’un perhaps?). With Shang-Chi and the Legend of the Ten Rings breaking open a mix of mystical legends and organizations like the Ten Rings, a sequel that continues to grow on those ideas would be exciting. Plus with the introduction of K’un-L’un we can finally see the legend of the Iron Fist done differently. Would those who live within the walls of K’un-L’un be friends or foes to Shang-Chi and friends? This leads me to think that some plans for Shang-Chi and others were road-mapped part of the way already, possibly even before this movie was finished filming.

Benedict Wong’s Wong’s obvious relevance (as we have seen in promotional footage) in the grand scheme of things only helps me elevate this possibility in my head. The knowledge of one of Kamar-Taj’s most skilled and loyal sorcerers being away from the Sanctum (as things go underway without him) can only help underline how important Shang’s relation is to the overall world. Wong previously mentioned that someone must remain guard, so it appears that he’s taking a shift away from the Sanctum which is odd. There must be a grand threat to pull someone of his importance from his post.

With the obvious emphasis on the Ten Rings, another question sure to be asked by viewers is how do they proceed with the organization after the credits roll? And how long will it remain relevant in the MCM? (you will have to watch the movie to find out!).

Knowing how Marvel likes their team-ups, Shang-Chi’s inclusion in the MCM is going to be spectacular since he seems to be able to fight threats of varying levels (maybe even an Avengers-level event!). Liu himself is already eager to punch around with other heroes, mentioning that he would love to see himself on screen with Tom Holland’s Spider-Man and try to recreate a comic run where he teaches Spider-Man Kung Fu and helps Peter develop a fighting style based off of it (Way of the Spider). Maybe Shang appears to assist Peter against Mister Negative or they run across one another while separately fighting The Hand?

This aligns with the information provided by Feige about the status of team-ups for Phase Four and beyond. He indicated that after the massive assembly in Avengers: Endgame, that smaller engagements between a few heroes in teams would continue to pair up. I think that between Spider-Man and Shang-Chi, the action would be very high-octane and their physicality would highlight both fighting abilities. The few clips I’ve seen of Shang-Chi in action had me so engaged in the choreography, the love and care behind that particular craft are so apparent. I would love to see Spider-Man have to learn to rely on his fists a bit more and Shang-Chi would be a fun choice to teach him that. With the emphasis of the Multiverse in this phase, it stands to reason that there are more than a couple of combinations that not even we are drawing up currently.

Every Marvel Hero has an origin story. ?? Be the first to experience Marvel Studio’s #ShangChi and the Legend of the Ten Rings only in theaters tomorrow! Get tickets now: https://t.co/CL8klUee3J pic.twitter.com/wFgS62fI3y

Even in this promotion shared, they take a moment to highlight the heroes from before and those who remain a part of the larger universe. These cuts of the legends only give me further assurance that Shang-Chi will stand alongside as an Avenger one day!

Although the movie is not out yet and we are only a day away, it’s exciting to already theorize on some progressions with a character that is about to make a very big introduction. I hope to see Shang and company as soon as possible after I leave the theater!

Shang-Chi and the Legend of the Ten Rings is exclusively in theaters beginning September 3rd. Catapulting this new hero into the Marvel world is something I’ve anticipated since the announcement in 2019, and now I’m just waiting to see it myself.

While you’re waiting, check out this collection of promotional posters Brian compiled that has me even more eager to see the action!