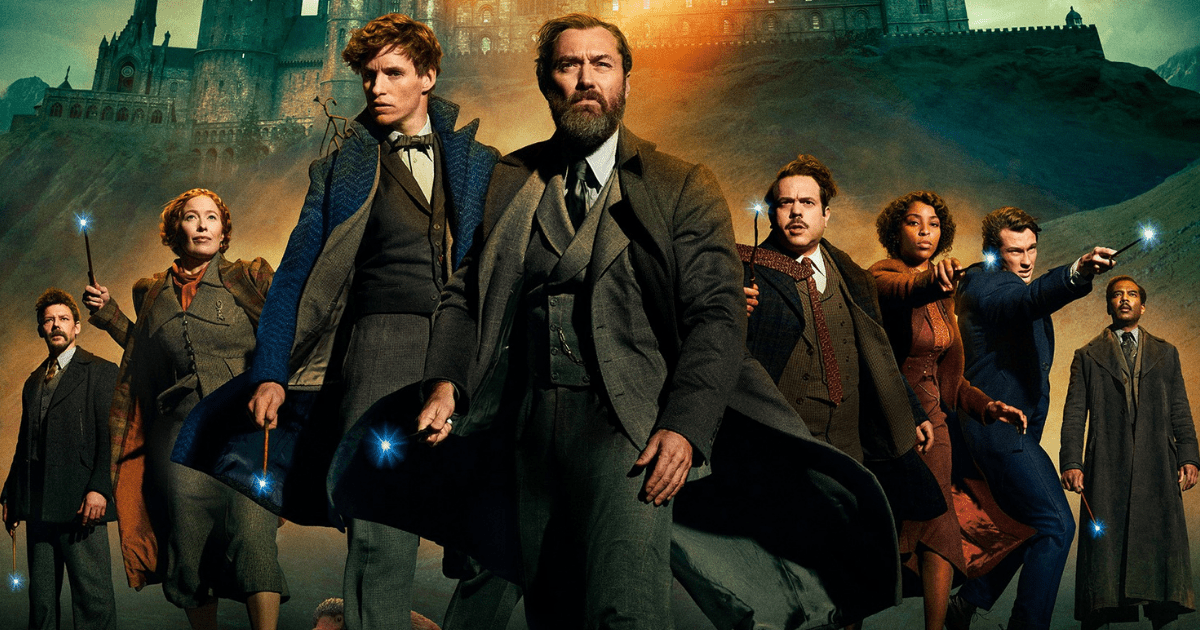 For a movie entitled The Secrets of Dumbledore, the third installment in the Fantastic Beasts franchise has very little to do with Albus Dumbledore’s secrets. When the film does delve into Dumbledore, it simply confirms very obvious things about his life or outright ruins him as a character.

The film routinely contradicts both itself and the Harry Potter franchise, simply because no one writing Fantastic Beasts 3 understands who Jude Law’s Albus Dumbledore is, nor do they desire to maintain any semblance of continuity across this failing franchise.

[SPOILERS AHEAD for Fantastic Beasts: The Secrets of Dumbledore.]

In Harry Potter and the Deathly Hallows, Dumbledore (Michael Gambon) is revealed for who he truly is: a flawed but well-meaning wizard, someone who is good at heart but has made many mistakes in his life. However, it is also made very clear that Dumbledore wasn’t simply a naive fool in his youth. Even in his old age, he manipulates people like Severus Snape and Harry Potter for his own ends.

While Dumbledore’s goals are inherently good, they do not excuse his behavior. He takes advantage of Snape’s continued guilt over Lily Potter’s death 15 years later to prevent Draco Malfoy from committing a terrible act, while he deliberately withholds the truth about Harry’s purpose in defeating Voldemort, despite knowing that Harry must die for the Wizarding World to win.

Coupled with Rita Skeeter’s exposé on his relationship with Mads Mikkelsen’s Gellert Grindelwald, Deathly Hallows finally shows Albus Dumbledore as a fully-rounded character. While he is a good person who helps other people, he also uses them for his own ends with little regard for how they are impacted. He shows sympathy for the people he uses but does not regret using them.

Dumbledore acts as an interesting foil to Ralph Fiennes’ Voldemort in this way. Voldemort believes he is above everyone else and seeks to rule as a result, while Dumbledore is thrust into a position of power that he no longer wants, yet his manipulative actions imply that he is above those being manipulated. Dumbledore’s manipulation is for good purposes, but Deathly Hallows makes it clear that these are still significant flaws that he battles with.

Nothing exemplifies this more than his history with his brother Aberforth. In Deathly Hallows and subsequent statements from the author, a timeline of Dumbledore and Grindelwald’s relationship was formed.

They met as teenagers in Godric’s Hollow, becoming friends and ultimately deciding to seek the Deathly Hallows. They made a plan to rule over Muggles because they believed wizards were a superior race, and Dumbledore eventually fell in love with Grindelwald. Before leaving his home with Grindelwald, Aberforth confronted the two of them for abandoning himself and Ariana, Dumbledore’s magically unstable younger sister. This argument culminated in a three-way duel, and by the end of it, Ariana was dead.

While it’s unclear who exactly cast the deadly spell, Grindelwald fled the Hollow, and Dumbledore stayed behind. In later years, Aberforth settled in Hogsmeade while Albus became Headmaster of Hogwarts, but they had very little contact after Ariana’s death because of their guilt.

Fantastic Beasts: The Crimes of Grindelwald introduced several plot holes to the Harry Potter franchise, and its sequel continues to retcon or outright destroy established continuity. While most of The Secrets of Dumbledore upholds what we learned about Albus Dumbledore in Deathly Hallows, some parts directly contradict his history.

To begin with, Albus appears to regularly meet with Aberforth for dinner in Hogsmeade. While there is tension between them regarding Ariana, Minerva McGonagall looking for Albus at The Hog’s Head implies that this dinner is a scheduled occurrence. The Dumbledore brothers seem much closer in this film than the original books or films ever implied.

Albus also tells Newt that he and Aberforth dueled the day he tried leaving Godric’s Hollow while Grindelwald simply stood back and laughed. Ariana was caught in the crossfire as no one had noticed her enter the room.

This change to Dumbledore’s history makes him a worse person, as he was willing to duel his own brother to avoid his familial responsibility. Originally, Grindelwald attacked Aberforth first and Albus stepped in to stop them from hurting each other.

The change places the blame for Ariana’s death squarely on one of her siblings, not allowing for the possibility that she was Grindelwald’s first victim. This also makes their more cordial relationship even odder, as though there is still tension between the Dumbledores, Aberforth doesn’t seem to harbor the extreme resentment he has against Albus in Deathly Hallows.

Furthermore, the change to the duel makes even less sense considering that Ariana Dumbledore has finally been confirmed as an Obscurial. When the concept of an Obscurus was introduced in Fantastic Beasts and Where To Find Them, many fans immediately guessed that Ariana was an Obscurial, which is why Grindelwald (as Percival Graves) was so intent on finding the Obscurial terrorizing New York.

My own theory is that he wanted to harness Ariana’s power, leading to his duel with Aberforth (who wanted to protect her), and when she was accidentally killed, Grindelwald fled to avoid responsibility for the incident. Tortured by guilt over Ariana’s death because of what it did to Dumbledore and her power slipping through his grasp, he spent years searching for another Obscurial until finding Credence Barebone (Ezra Miller) in New York.

When Credence was revealed to be a Dumbledore in Crimes of Grindelwald, it seemed like such a stupid plot hole that I believed Credence was the new host for Ariana’s Obscurus. However, Secrets of Dumbledore’s only real “secret” is that Credence Barebone/Aurelius Dumbledore is actually Aberforth’s illegitimate son, a plot twist that makes even less sense than him being Aberforth’s brother.

This is what brings Albus and Aberforth together, as they try to save Credence from dying at Grindelwald’s side. Credence has little to no real role in the new film, simply serving as a plot device for Dumbledore to perhaps account for his role in his sister’s death. After all, Credence’s Obscurus is killing him and he’s still family. However, this idea is barely developed and mostly left up to the audience to guess, as Ariana is only mentioned twice in the film and her Obscurus is not dwelt upon.

Finally, the absolute worst part of the Fantastic Beasts franchise is what it’s done to Dumbledore and Grindelwald’s relationship. While the third film establishes in its opening scene that Dumbledore once loved Grindelwald, it also reinforces the second film’s idiotic reason for why they can’t fight.

In Crimes of Grindelwald, it was revealed that the two formed a blood pact as teenagers to never fight the other if one of them strayed from the path they walked together. In Secrets of Dumbledore, Dumbledore shows how the pendant will attempt to kill him if he even thinks of moving against Grindelwald. This is also clearly a plot hole, but even worse, it effectively removes one of Dumbledore’s worst actions.

In pre-Fantastic Beasts continuity, Dumbledore refused to fight Grindelwald for almost 20 years despite the outcry from the Wizarding World to face him. It’s implied that Dumbledore still loved him but did not want to confront him about his sister’s death, emphasizing Dumbledore’s selfishness.

Dumbledore chose to ignore the atrocities Grindelwald committed so he could avoid confronting his own feelings of guilt and affection. He finally dueled Grindelwald in 1945, winning the Elder Wand and locking the dark wizard away in his own prison. Fantastic Beasts effectively removes this selfishness from Dumbledore’s personality, as the movies provide a contrived MacGuffin to allow Dumbledore to avoid his role in Grindelwald’s reign of terror.

However, Fantastic Beasts appears to want things both ways. It removes Dumbledore’s selfish action of refusing to fight Grindelwald out of fear and lingering affection but adds his selfish action of dueling his own brother to avoid responsibility for his family.

For some reason, the consequences of this action are not explored, as Aberforth is willing to dine with him and aid his missions as long as Ariana’s name is not mentioned. The brothers are brought together by saving Aberforth’s son, but Credence drops out of the story as soon as he’s in Aberforth’s arms.

What makes all of these confusing, unnecessary changes even worse is the way Secrets of Dumbledore contradicts itself. After learning about Ariana, Newt tells Dumbledore that he is still a good person who made serious mistakes, a sentiment consistent with how Dumbledore is portrayed in Deathly Hallows. However, at the end of the film seems to dismiss Dumbledore’s flaws entirely, as a Qilin bows to him in a climactic moment.

In the Wizarding World, Qilins are magical creatures with the ability to see into a person’s soul and only bow to the purest of hearts, signaling their ability to be an incredible leader. While Dumbledore is undoubtedly a good leader in the war against Voldemort, nothing in the Harry Potter franchise or even The Secrets of Dumbledore itself leads a viewer to believe that he has the purest heart out of any wizard on Earth.

Albus Dumbledore is a flawed, messy individual who made such damaging mistakes in his life that he estranged himself from his only family and the man he loved. In the Harry Potter series, Dumbledore is portrayed as a self-sacrificing person who would do anything for the greater good of the Wizarding World, despite the people he kills or hurts along the way.

This sentiment is reflected in his teenage schemes to rule Muggles and in his adulthood plans to defeat Voldemort. While Fantastic Beasts: The Secrets of Dumbledore acknowledges Dumbledore’s flaws at first, the film entirely throws them out in the finale.

Gellert Grindelwald asks Albus Dumbledore who will love him now as the pendant finally breaks and he escapes the wrath of the wizarding community in Bhutan. As we know from Harry Potter, the answer is no one. The difference is that much more blame lies on Dumbledore in the original continuity, while Fantastic Beasts’ revised continuity simultaneously places more and less blame on Dumbledore while allowing him to sidestep most consequences.

Grindelwald’s last line is clearly a desperate attempt to taunt Dumbledore since it has never been conclusively established that Grindelwald loved him back. The question hits hard because we know how Dumbledore’s story ends, but it rings false at the same time because we know their story is not yet over.

Yes, Dumbledore walks alone into the night as Fantastic Beasts: The Secrets of Dumbledore fades to black. But he’s not truly alone yet, since he has a brother and nephew waiting for him in Hogsmeade, and hasn’t addressed his guilt and affection for Gellert Grindelwald.

We may never get the planned fourth and fifth Fantastic Beasts movies, but maybe that’s for the better. The writers of Fantastic Beasts clearly do not understand Albus Dumbledore if they changed the circumstances of his solitude in a misguided effort to add unnecessary plot twists to a continuity they established over a decade ago.

Have you seen Fantastic Beasts: The Secrets of Dumbledore yet? What did you think of it? Let us know in the comments or on Twitter at @mycosmiccircus.