Hey there true believers! Yesterday the image of new Lego set dropped for Thor: Love and Thunder called “Attack on New Asgard.” One very curious and notable aspect of the set is that it included a rather strange-looking monster.

[SPOILER WARNING for Thor: Love and Thunder below!]

The other Thor: Love and Thunder Lego set titled “Attack on New Asgard”

Now, my first thought upon seeing this monster was “Wow. That’s one goofy-looking monster!” followed by thinking it looked like a child’s drawing in some ways. Well, here comes the exclusive part of this post because not long after last night I heard from a previously reliable source that this particular monster is in fact brought to life in the film from a child’s drawing!

This seems like a pretty wild idea, but remember who the director is, among other factors I’ll get into below, and it makes sense. It wouldn’t surprise me if Taika Waititi drew the picture himself.

Of course, when it comes to making drawings come to life the first Marvel character that comes to mind is Kid Kaiju Kei Kawade. At the moment, however, I believe a much more sinister presence may be responsible for the child’s drawing coming to life and attacking New Asgard.

To start with I would be remiss to not mention the casting call that Illuminerdi reported long ago for a young boy they were calling Zappa that would appear in Thor 4. You will note that this character really doesn’t match up with Kei Kawade at all. It’s possible he was also cast, it just wasn’t reported, or they have changed Kei Kawade or given his powers to Zappa, but obviously what I’m hearing is that Kid Kaiju is not responsible for the monster coming to life in the film.

That leaves far fewer possibilities and after doing some research, I’ve come up with a theory. Gorr is also seen attacking Asgard in this Lego set. You can see him holding a sword, more specifically he’s holding All-Black The Necro Sword, which he uses to kill various gods.

In the comics, the Symbiote and the Sword imbue Gorr with many powers, one of which involves the creation of Black Berzerkers who do his bidding to help him kill the gods. You may recall that Berzerkers appear in Thor: Ragnarok as they are commanded by Hela. 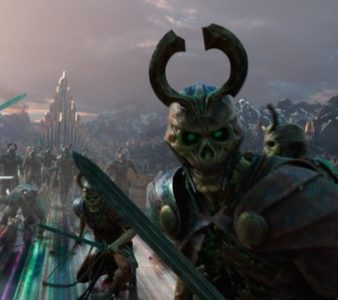 This is where that play, the Asgard Tours, and a child’s drawing come into my theory about this monster. We know that there is a play depicting what happened in Thor: Ragnarok and Hela and her legion’s attack on the Asgardians. We know that there will be tours of New Asgard so the Midgardians pay to see what it’s like in this Viking-like fantasy land of gods and monsters.

So this is perhaps where Zappa comes in, and this is perhaps where he and other children learn about Hela and other monsters attacking the Asgardians, and they then perhaps draw what they imagine those monsters might look like. Jormungand the Midgard Serpent was also pointed out as a possibility for this Lego monster, tho it still really doesn’t quite match what we’ve come to expect for that creature either. But it may match a child’s idea of what the Midgard Serpent, or Berzerkers, or another monster of Asgard’s past, might look like.

I *think* that's meant to be a Black Berserker? pic.twitter.com/XxgvRVPAo8

In any case, here comes Christian Bale’s Gorr the God Butcher… with the power to manifest monsters. And perhaps inspired by the visiting children’s drawings he sees when he arrives at New Asgard, he brings at least one of them to life.

Naturally, people will say well the Lego sets are not entirely reliable because they sometimes throw in other things that are not actually in the films. Still, I find it an odd detail for Lego to just make up, that this monster was made from a child’s drawing. That seems random even for them.

So I believe my source, who also knew about the “evil” Doctor Strange in the Doctor Strange 2 trailers being referred to as “Sinister Strange” way back in December, that this tidbit of information about this child’s drawing of a monster is from the movie as well.

What do you think? What is this monster and how does he come to be in Thor: Love and Thunder? Let us know in the comments or on social media!