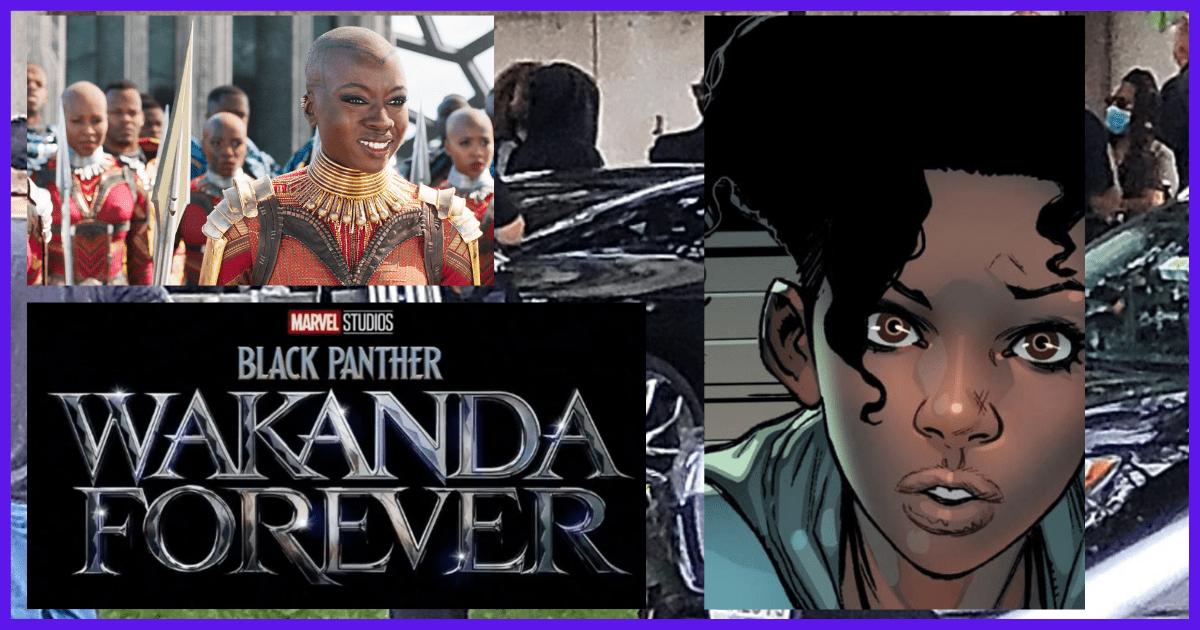 I exclusively reported last month that Black Panther: Wakanda Forever would be filming at MIT, and while I was at it, hinted hard about the fact that Riri Williams (Dominique Thorne) was going to make her MCU debut in the film before heading to her Disney+ series Ironheart. A few images have already leaked from the production as it’s been filming both in GA and Massachusetts, and rumors have abounded about Dora Milaje being there as well as Riri Williams. However, last night I was sent exclusive images as well as a scene description from the filming at MIT in Cambridge and was given some information about who is there!

As you can see below there is very definitely a lady in black with no hair and sunglasses in the center, next to a mysterious person in a black hood who is obviously being hidden from spoiler-hungry fans. As I mentioned, recent rumors have placed Dora Milaje there, and I believe Okoye (Danai Gurira) is the woman in the center. You might point out, that the hooded cast member is a bit more tricky to discern, however. That being said, I will confirm that yes, I have learned that both Okoye and Shuri, as well as Riri Williams, are in scenes filming in MA and at MIT.

The confirmation of the characters involved there comes separate from the person who supplied these pictures. But I believe the information is reliable. The MIT witness also supplied me with an exclusive scene description of what Riri was up to on campus.

Check the images out below, then read on!

“I was at MIT today while they were doing day shoots for Black Panther 2. Wanted to share what we saw.

One scene we saw being filmed outside the Stratton Student Center was Riri Williams (Dominique Thorne) talking to a male (I presume) student. It was a pretty quick scene. She had a gray shirt on. The male student was a taller, white male, wearing a dark red shirt. Extras acting like students walked around in the background.

The Riri scene was just her and a guy talking, then she walked away, and pulled out her cellphone. Very short.”

“We saw them prepping another scene, also outside the Stratton Center. A black Lexus was parked, and there were two actors outside it. Once was definitely a Dora Milaje (couldn’t tell if it was Danai or someone else). Another actress was there as well, but she had on a black hood and robe so couldn’t tell who it was. I think they were talking to Ryan Coogler, but it could have been another member of the crew.”

“We didn’t get to see the Dora scene filming unfortunately. They were setting everything up and the actors were out there but we had to leave before they filmed anything.
Honestly wasn’t expecting to see anything because I had heard it was mostly night shoots but figured we’d check it out anyway to see what was going on and it paid off I guess haha.”

The person who took the pictures confirms that this is a Dora Milaje and that the hooded figure is definitely a female, and I have separately confirmed that this is Okoye with Shuri.  Based on the fact that Shuri is being covered, and therefore her costume possibly a spoiler, is also interesting. Could she be in a very special costume already? Or just a particularly stunning fashion statement from the Princess of Wakanda that Marvel has deemed only fit to be seen on the big screen? We’ll find out eventually!

The Riri scene description sounds like just a way to set her up as having a typical day at the university, hanging out by the student center, talking to a friend. Shuri and Okoye, I’m told, were not involved with that scene.

Below are a few more shots from around MIT of the production being set up. The witness adds:

“Other than that, there were lighting rigs set up along Vassar Street and crews were prepping for night filming.”

Black Panther: Wakanda Forever is scheduled to hit theaters July 8, 2022. Ironheart is expected to begin filming in April of next year. Were you able to catch Black Panther filming at MIT? Are you excited to see Riri make her debut in the film? Let us know on social media!