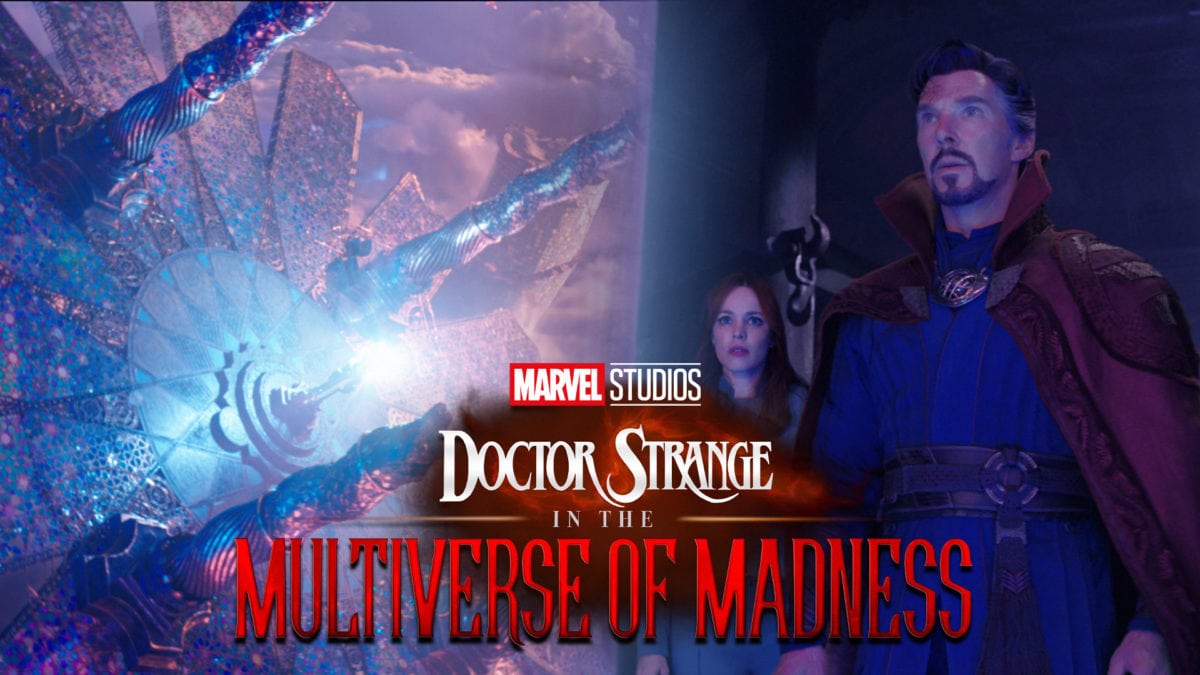 Sam Raimi and Marvel Studios are certainly not holding back when it comes to Doctor Strange in the Multiverse of Madness. A new poster and a trailer dropped this past Super Bowl Sunday, with fans scanning every single frame and pixel of these promotional materials in search of clues for what mind-bending story the MCU is aiming to tell.

Some have found cues to certain characters potentially appearing in this film, while others have located elements that will serve a significant purpose to the story later on. Today, we will discuss one of these elements and how it fits into the film’s plot moving forward and I’ll throw in a few exclusive plot details that I know about along the way.

[Please take this as your general SPOILER warning as we will be discussing spoilers from Doctor Strange in the Multiverse of Madness. Turn back now if you do not want to be spoiled.]

After amplifying the element in the official poster, you can see what appears to be a book sitting on a fancy stand on top of a table. Many have assumed that this book is the Darkhold, but that is not the case as the Darkhold itself appears on the poster on the far left side under Defender Strange.

While it has been rumored and theorized that the book could make its debut in the Multiverse of Madness, the poster confirms that we will indeed be seeing this book used during the Doctor Strange sequel.

For those who may be unaware of the book or its power, the Book of the Vishanti is, in essence, the antithesis of what the Darkhold is. The Darkhold contains dark magic and corrupts the user who wields it, as the book will eventually do to Wanda Maximoff after prolonged use for almost two years.

On the other hand, the Book of the Vishanti stands as a symbol of light and pure magic, filled with spells used to counteract the effects of dark magic, most often the Darkhold. Of course, the main question now is finding out where exactly the book is located in the MCU. And we can answer that as well.

In both trailers for the upcoming sequel, this pocket dimension/alternate universe pictured above is where the Book of the Vishanti is kept.

MCU Stephen Strange is not particularly aware of where this book is held, but his variant is. Defender Strange appears for brief moments during the TV Spot and the trailers, but notice how he and America Chavez are together in that same room fighting off a monster during these spots.

It is our understanding that Defender Strange and America Chavez are potentially from the same universe and are aware of the threat that looms in this film. This leads them to this pocket dimension (set in what we believe is Chavez’s home dimension) where they will try to use the Book of the Vishanti to stop the threat in its tracks.

Unfortunately, Defender Strange notices how the danger is too great for either one of them to stop. We’ve heard that he manages to save Chavez by casting her out of the pocket dimension into another universe via her portals before this Strange variant meets his demise and falls through her still open portals as well. America can’t control where she’s going at this point and ends up with our MCU Strange. This then leads into the rest of the film’s plot.

It is to our understanding that the film will take Doctor Strange, America Chavez, and Wong on a journey across the Multiverse searching for the Book of the Vishanti to stop the Darkhold’s corruption of the Scarlet Witch before she destroys the Multiverse.

Of course, multiple mishaps and hijinks will come along the way to slow them down, but the ultimate end goal will remain the same. By the time the film reaches its climactic showdown, it will not only be a battle between Doctor Strange and the Scarlet Witch but the Book of the Vishanti going up against the Darkhold for the sake of the Multiverse.

Doctor Strange in the Multiverse of Madness debuts in theaters on May 6, 2022.