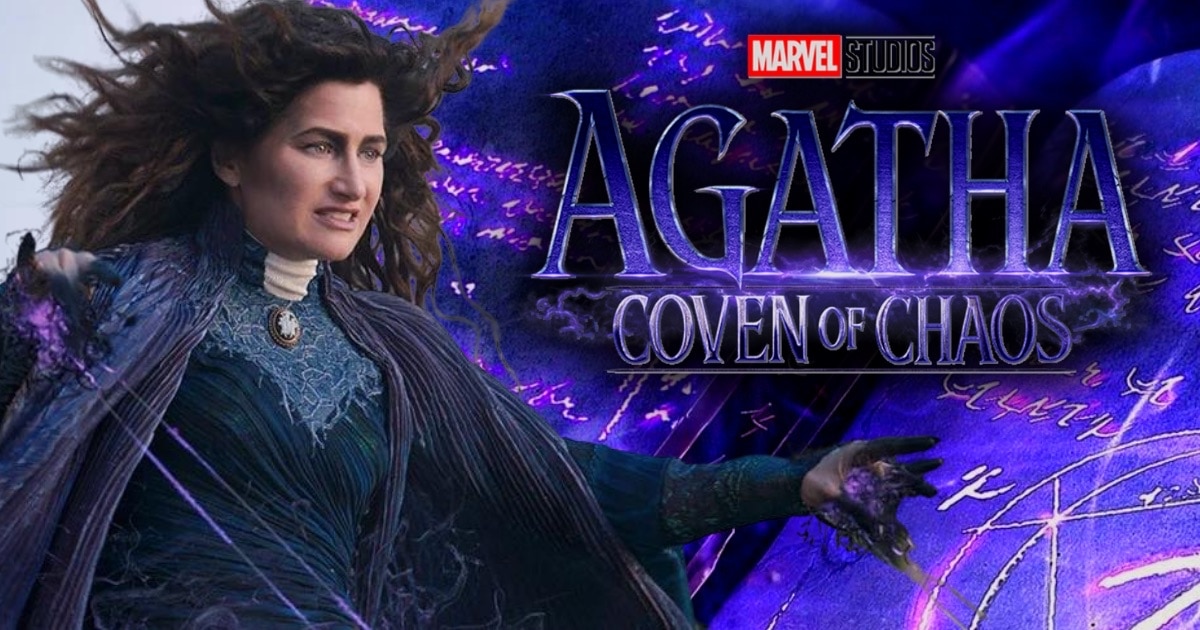 With D23 on the horizon, it’s shaping up to be an exciting week for Marvel and Disney fans. At The Cosmic Circus, we’ve been on the constant lookout for news about all of our favorites. Today we have some exciting news to share for those who stan the alpha witch and nosey neighbor Agatha, played by Kathryn Hahn. If you’re one of the folks who have streamed WandaVision’s “Agatha All Along” on endless repeat as the soundtrack to your life while waiting these past few months for news, keep reading. We have the details about the working title of Agatha: Coven of Chaos.

We’re off to see the witch of Westview

As we’ve reported previously, Marvel Studios tends to use a working title for their projects that’s different from the actual project title. The studio is doing the same thing for the winter 2023 show Agatha: Coven of Chaos. The upcoming Blade movie, for example, uses a working title of Perfect Imprints. And we reported the news that Echo had used the working titles of Whole Branzino and Grasshopper.

“My Pretty” is an interesting working title for Agatha because it immediately conjures up visions of the Wicked Witch from the Wizard of Oz. There’s that famous scene in which Margaret Hamilton’s Wicked Witch proclaims, “I’ll get you, my pretty!” to Dorothy and her little dog Toto.

A theory about Agatha’s working title

WandaVision never shied away from direct references to The Wizard of Oz, and Agatha: Coven of Chaos doesn’t appear to be doing so either.

If you watch the entire scene in The Wizard of Oz with the Wicked Witch, where she utters her famous line, you’ll note that the house doesn’t fall on her. The folks in Munchkinland are celebrating because the tornado transported house fell on The Wicked Witch of the East. The Wicked Witch of the West (Margaret Hamilton) is her sister, the main villainess of the movie, and the one who will try to thwart Dorothy (Judy Garland.)

The familial connection in Oz is interesting when it comes to Agatha because both show titles have been indicative of family. Both “coven” and “house of” indicate a close group of people – in this case, witches. Using “My Pretty” as a working title emphasizes that. Could we see Abigail Harkness or other relatives in this show?

When we last left Agatha in WandaVision, she was imprisoned in the Agnes personality in Westview. Agnes warned Wanda (Elizabeth Olsen) that she would need her someday. Maybe we’re going to see an Abigail/Agatha matchup. Or perhaps this Agatha: Coven of Chaos will be an origin story of sorts and show the coven members that Agatha betrayed to get powerful. Whichever way you break it, the story will surely be exciting and have significant ramifications for the greater MCU.

Now, I will note that “My Pretty” is just one of the working titles for Agatha’s show. There have been instances in the past where shows have used multiple working titles. And, of course, it’s Marvel, so everything is fluid until you see it on screen. Recall that Agatha: Coven of Chaos was called Agatha: House of Harkness a few months ago. We don’t know why that was changed. We’ll have to wait and see.

Will Agatha appear in something before Agatha: Coven of Chaos?

Rumors have circulated for the past few months that we could see Kathryn Hahn back in the MCU before her show airs. The upcoming show Ironheart will have Anthony Ramos as The Hood, a foe to Dominique Thorne’s Riri Williams. Twitter chatter has said that the mystical Hood will have a mentor, and it will be none other than Agatha. However, Cosmic Circus’ own editor-in-chief Lizzie Hill has been unable to confirm this rumor, so at this point, it’s just a rumor.

I know that Kathryn Hahn hasn't been there so far. Had heard nothing from anyone reliable that she would be either. #Ironheart https://t.co/JPtEnCzsLZ

Don’t worry, Cosmic family. We’re sure to get more news as the week progresses and we get closer to D23. And you can watch Agatha: House of Harkness on Disney+ starting in the Winter of 2023. In the meanwhile, check out some of our other pieces to satiate your witchy appetite. Last year, Vin wrote a thorough reading guide to the Scarlet Witch comics. And Alex Perez had some fascinating thoughts addressing Wanda, Agatha, and the Scarlet Witch prophesy.

And as a final thought, if you need a palette cleanser for the earworm of a song, “Agatha All Along,” check out this clip from WB and the 75th Anniversary of The Wizard of Oz. It’s the one I reference above in this article. The scene’s been playing through this author’s head since I learned about Agatha’s new working title.

Are you excited about the news about Agatha: Coven of Chaos? Please share your thoughts with us on Twitter @MyCosmicCircus. And if you haven’t already, check out this recent exclusive from our Editor-In-Chief Lizzie Hill about some exciting Ironheart details and a confirmation of Anthony Ramos’ role in the Disney+ series!