Monster hunter Elsa Bloodstone is one of the newer comic characters who have exploded in popularity over the past decade. Maybe you know her as a Midnight Son, maybe you know her from her eight video game appearances in the past ten years, or maybe you’re hearing her name for the first time today!

Whatever your history with Elsa, she is not a character to miss out on. To get up to speed before her appearance in Marvel’s Werewolf By Night Halloween special, here’s what you need to read:

These 40 issues are the greatest hits from 20 years of Elsa comics – and there’s plenty more ahead! Proudly English, outspoken, and forever sarcastic, Elsa is a great character for personality alone – but she also carries the Bloodgem, which gives her enhanced physical abilities and immunity to vampirism (Could we see her pop up in Blade?). So get ready for a wild ride of monsters, magic, and mayhem as we watch Elsa evolve from a simple Lara Croft copy into one of Marvel’s greatest original characters of the modern age.

As always, strong recommendations are in bold. Have fun reading!

Elsa’s story starts with her father Ulysses. More than just a monster hunter, Ulysses is also a monster of a human being. You’ll learn more as you go, but for the most part, Ulysses’ stories aren’t essential reading for Elsa herself. Just keep in mind that Elsa’s father was a monster hunter who lived for thousands of years thanks to a rock called the Bloodgem (also called the Bloodstone).

Long after Ulysses’ prime, writers Dan Abnett & Andy Lanning developed a spinoff character with artist Michael Lopez in the new series Bloodstone. Sort of like Buffy the Vampire Slayer + Lara Croft/Indiana Jones thrown into the world of Castlevania, their early version of Elsa Bloodstone seemed simultaneously exciting and unoriginal, and wildly different from the current Elsa we know today.

A few years later, Warren Ellis (the creator of Mr. Knight!) and Stuart Immonen rebooted the character by capitalizing on Elsa’s unique character potential and breaking the cliches she had been trapped in. Their massively popular, award-winning run on Nextwave is still considered one of the greatest runs in modern Marvel history and even has its own official theme song. If you’re going to read one only series of Elsa comics, read Nextwave.

MCU theory: In Bloodstone, Elsa works alongside Dracula, a version of Frankenstein’s Monster, and the Living Mummy to take down “Nosferati” vampires. Could we see a similar scenario in Blade with Elsa, Blade, Black Knight, and Werewolf by Night against a horde of vampires led by Dracula? 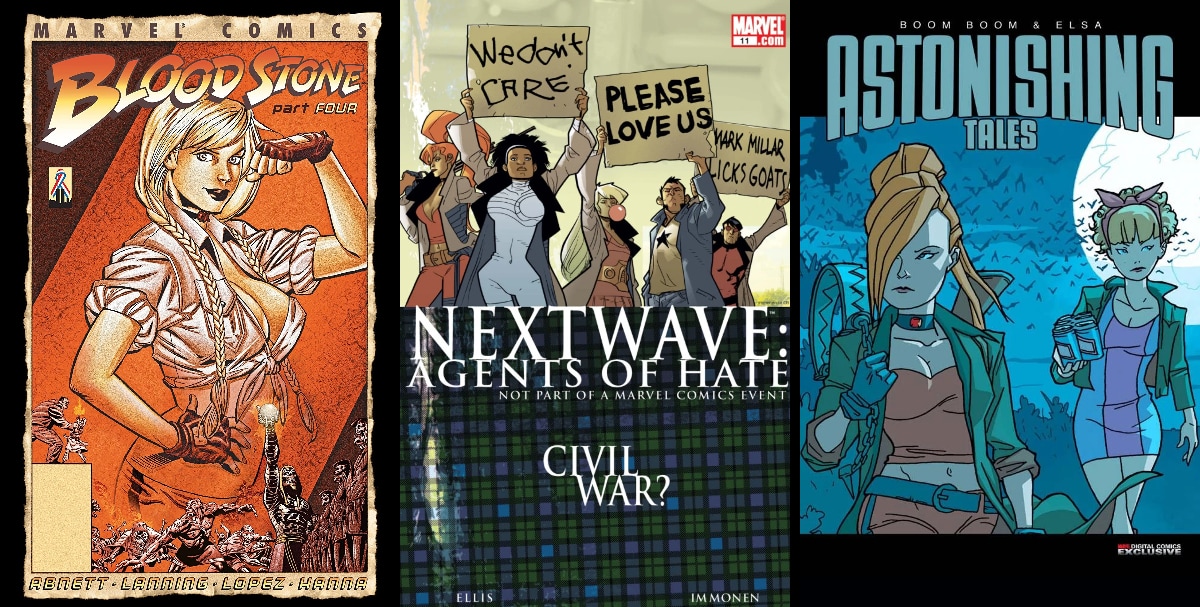 With Nextwave reigniting interest in the character, Elsa really took off in the early 2010s. Working with the Legion of Monsters, Wolverine, the Defenders, and even the Thunderbolts, Elsa quickly began gathering the exposure she deserved. During this time she also started appearing regularly in Marvel video games, which introduced her to new fans around the world.

I would encourage readers to check out her Legion of Monsters comics specifically to see her relationship with Werewolf by Night and how that could inform the upcoming Disney+ special! 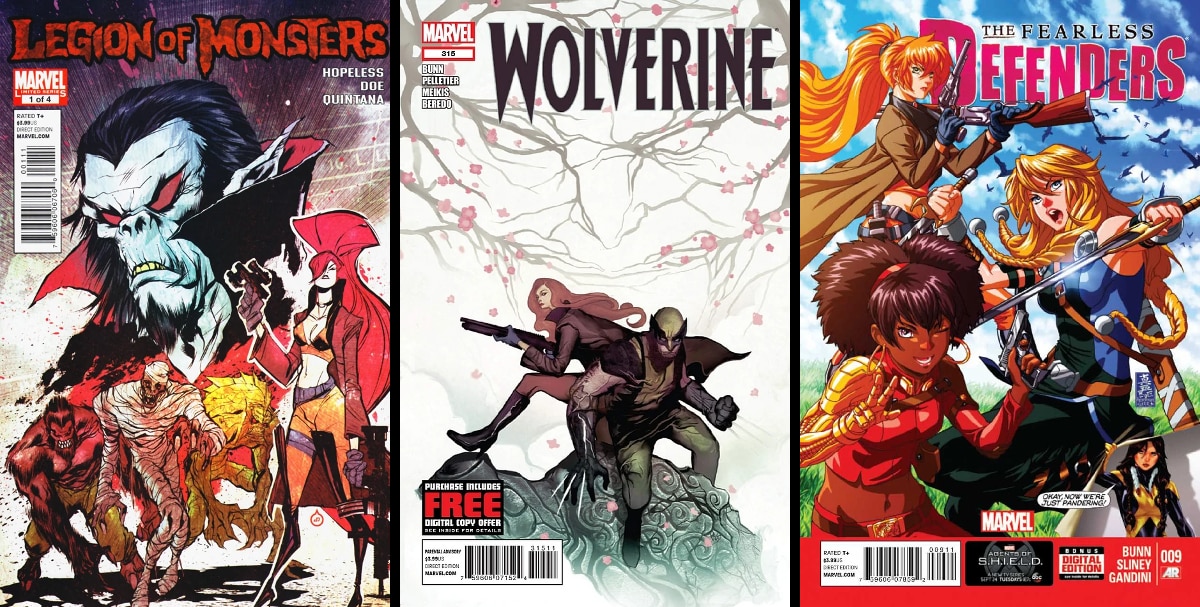 Elsa’s Marvel Zombies (2015) run is set in an alternate world but it’s such a fun run and it’s so iconic for her character that it is essential reading for any Elsa fan. In the late 2010s, Elsa also joined A-Force for a fantastic mini-arc before diving back into monster action with Monsters Unleashed and Damnation.

These two might be fun extra reading, but neither is really recommended or essential – Legion of Monsters is a better choice than the much-maligned Monsters Unleashed, and Elsa just didn’t have much to do in Damnation (but the Midnight Sons look cool!). She also had a small team-up with Jessica Jones that might be worth a look, especially for fans of Jessica’s Netflix show. 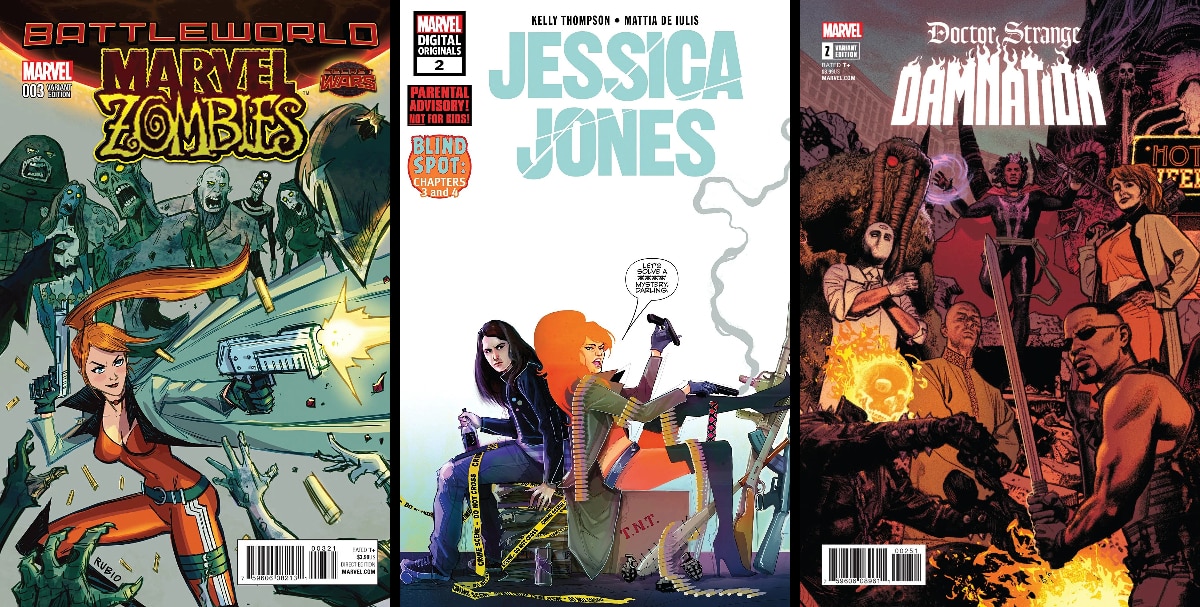 Rounding out Elsa-mania in the 2010s was King Deadpool, a wonderful 10-issue run from Kelly Thompson that saw Deadpool rule over an island of monsters with Elsa at his side. This series is absolutely crucial for uniting Elsa with her best pal Jeff the Landshark, who is the sweetest little baby and deserves the world (see below).

Heading into the 2020s, Elsa had a few more guest appearances and her own one-shot as part of the Death of Doctor Strange event, but she hasn’t had a new ongoing yet. With Irish actor Laura Donnelly bringing the character to live action later this year, we can expect Marvel to spotlight Elsa and her family accordingly in the coming months. Though with so many great comics and video game appearances already, there’s plenty to keep us busy until then!

Our own Luna Gauthier just reviewed Elsa Bloodstone: Bequest, a brand new novel starring Elsa. Luna says “Cath Lauria spins an exciting tale with plenty of action that still manages to have some heart. It was refreshing to read about a heroine that wasn’t all sharp edges but was 3 dimensional. Elsa lives in an interesting mix of magic and monsters that had a surprisingly real feeling. Lauria uses enough humor in the book to make it thoroughly enjoyable without becoming silly and it’s all appropriate for even young readers. I highly recommend this book for everyone to read!” Check out her full review here! 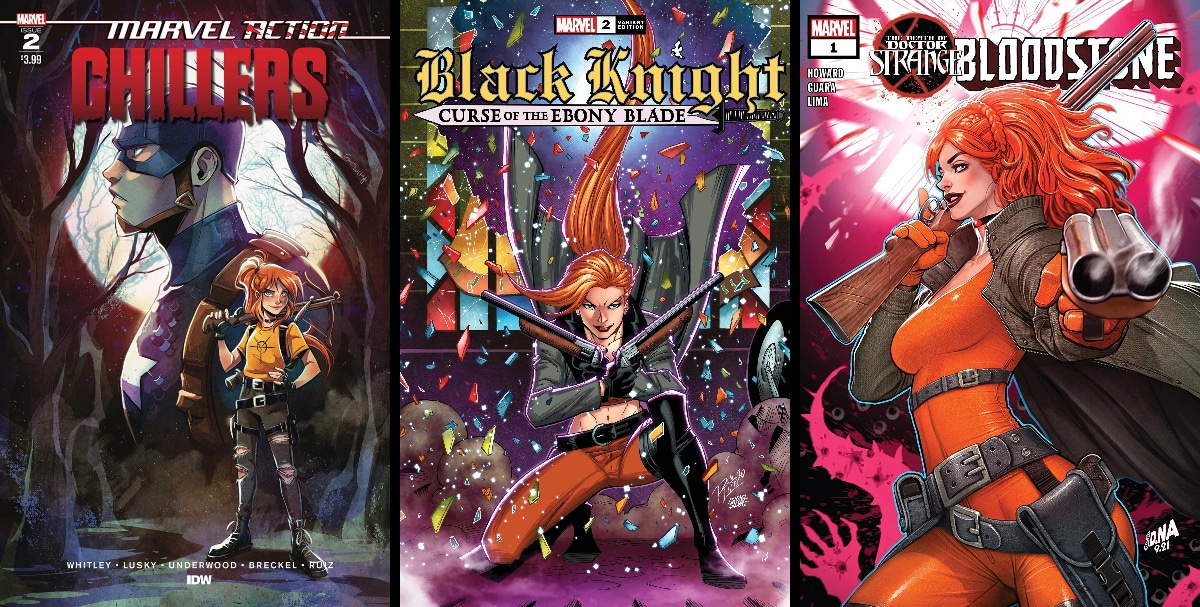 And those are all the Elsa Bloodstone stories so far! What caught your attention? What’s your history with the character? Let me know on Twitter @vinwriteswords and remember to follow the site @MyCosmicCircus for more cosmic content!

I can’t mention Jeff the Landshark and not give Jeff recs, so presented here is the JEFF THE LANDSHARK READING GUIDE!!!! This adorable little guy is the star of the show across much of Kelly Thompson‘s recent work with Marvel. First created in West Coast Avengers as a minor background character, Jeff took the world by storm in the pages of Gwenpool and Deadpool and nothing has ever been the same! This past year he even got his own solo digital series because he simply deserves the best. Please check out our good boy today: