Maya Lopez is one of the strongest fighters in the Marvel universe. After being adopted by Kingpin, she spent years training to be an assassin. Because of her uncanny ability to perfectly imitate any physical action she sees, she eventually earned the name “Echo.” Although Maya is deaf, she is able to achieve combat competency on par with Daredevil by relying on her well-trained visual senses.

With her Disney+ series filming now with rising star Alaqua Cox, it’s clear Echo has made a huge impact despite being relatively under the radar in the comics. Although her most famous story is still her first appearance in the late 1990s, she’s also dated Marc Spector, joined the New Avengers, hosted the Phoenix Force, and is now one of the most powerful Avengers of all time. Echo rocks.

So if her live-action debut in last year’s Hawkeye show piqued your interest, here are the major comics you need to read as we wait for the Echo series to drop in 2023:

From her tragic childhood to her fiery future, these 30 issues cover the essentials you need to know about Maya Lopez, but there is so much more to the Cheyenne champion. Read on to her about her role as the original Ronin, her impact on Secret Invasion, her six video game appearances, her alternate reality appearances, and more!

“My story doesn’t happen in the sound of the notes but in the silence between them.
That is where the magic happens. That silence is where you will find me.” Echo was created by David Mack as a part of only two stories in his 1990s Daredevil series. In particular, “Parts of a Hole” remains one of her most powerful and moving stories to date. Believing the lies told by Wilson Fisk, Echo is sent to take down Daredevil… but what happens when Maya falls in love with Matt Murdock? The consequences of her actions are explored in “Vision Quest,” which is looking to be essential reading for her MCU series next year.

Cosmic Circus writer Tucker tried the series earlier this year and had a blast. He says, “I read the two Daredevil runs, and they’re excellent. ‘Vision Quest’ particularly is a must read. If you’re someone who typically doesn’t read comics, ‘Vision Quest’ should be the exception. A gorgeous story that utilizes every inch of a page like I’ve never seen before.” 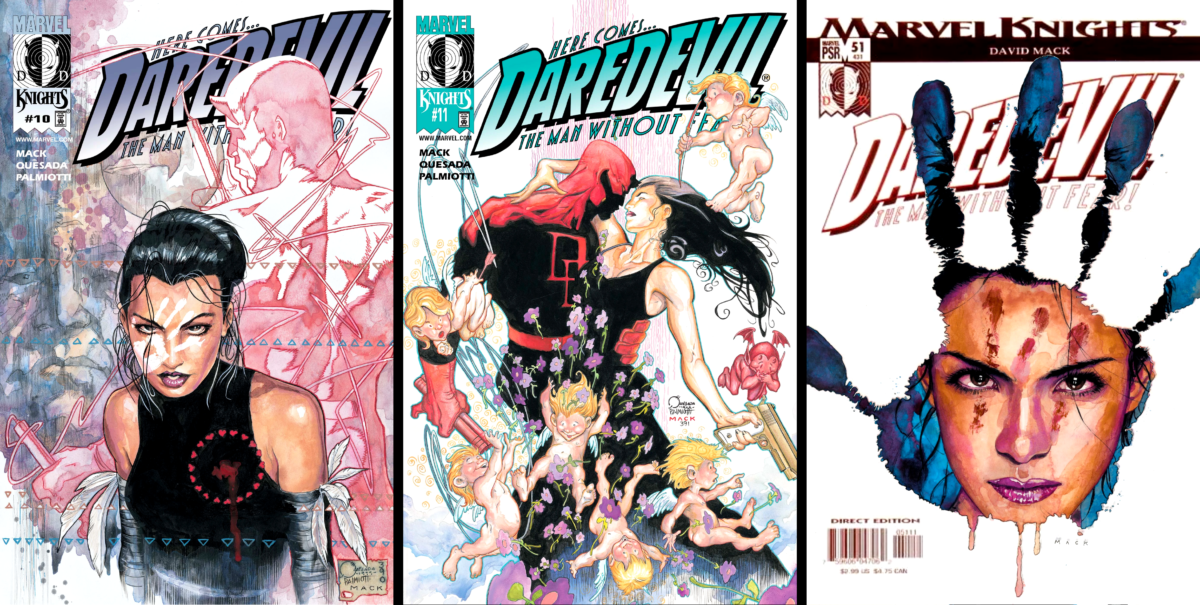 After being asked to join the New Avengers but feeling uncomfortable with her identity, Echo creates a new costume that obscures her from head to toe and conceals her gender. Under the pen of Brian Michael Bendis, she joins the New Avengers under the name “Ronin,” the first time the mystery identity was used in the comics.

After her identity was eventually revealed, she returned with a major role in the skull-centric chaos of Secret Invasion, which is when her close partnership with Hawkeye began. Having risen to a new position of prominence, Echo went on to have recurring roles in various events across the late 2000s. Bendis continued his work with Maya in the early 2010s by bringing her into his Moon Knight run. In an unexpected turn of events, Maya and Marc start a fiery relationship which was never really mentioned again.

In recent times, Echo earned the power of the Phoenix through a trial by combat tournament during Jason Aaron’s Avengers. “Indigenous Voices” writer Rebecca Roanhorse continued exploring Maya’s world and her relationship to the Phoenix Force in the Phoenix Song: Echo miniseries the this past year, which was also the first Echo solo title. More than a temporary change, the Phoenix phase is looking to be an exciting new status quo for Maya going long into the future. “My name is Maya Lopez. And I am an echo of all the fire and life that’s come before me.
I am the Thunderbird of old and of tomorrow. I am the Phoenix.” And that’s the story of Maya Lopez so far! Have you spotted her in any video games yet? What are you going to read next? Let me know on Twitter @vinwriteswords and remember to follow the site @MyCosmicCircus for more kickass content!

Are you new to comics? Try our “How to Get into Comics” guide below, and find me on Twitter if you have any questions!