‘Doctor Who’ Spin-Offs We Could See From Disney & The BBC 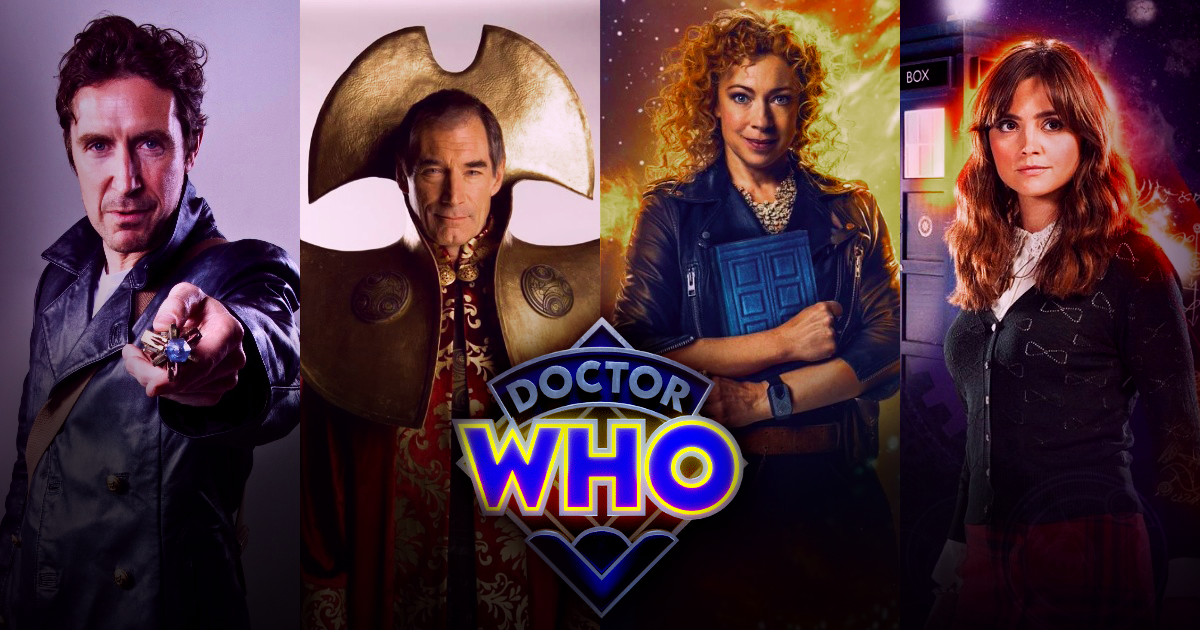 ‘Doctor Who’ Spin-Offs We Could See From Disney & The BBC

When Disney acquired the global streaming rights outside of the U.K. to BBC-produced Doctor Who, many fans of the series heaved a sigh of relief. For years, the series hadn’t been available worldwide, only in a small number of countries. Now, thanks to the new deal, new seasons of Doctor Who will be available on Disney+ internationally and remain on BBC in the U.K. and Ireland. Most excitingly, this could also open up the possibilities for more Doctor Who spin-offs going forward.

Joining forces with Disney is something that’s sure to pump more money into the series, giving us even better characterizations, better visual effects, and more popularity for the franchise. But with this deal, there must surely be some plan for the future of Doctor Who, given that Disney is known for expanding its popular franchises into multiple ongoing projects. Listed below are my suggestions for the most likely Doctor Who spin-offs that could be created by the BBC and Disney.

Torchwood was the first post-revival live-action TV spin-off of Doctor Who. Russell T. Davies created the series as a paranoid sci-fi police thriller with a sense of humor for adults, originally designed to complement Season 3 of Doctor Who.

The main characters of the series were the beloved Captain Jack Harkness (John Barrowman), Gwen Cooper (Eve Myles), Owen Harper (Burn Gorman), Toshiko Sato (Naoko Mori), and Ianto Jones (Gareth David-Lloyd). Torchwood the live-action series was put on hold after the fourth season due to Russell T Davies’ personal reasons. However, the story continued through comics, novels, and even audio. In fact, Torchwood seasons 5 and 6 were presented fully as audio dramas through Big Finish Productions.

One idea for the return of live-action Torchwood could be a sort of soft reboot with new characters who continue the legacy of the previous team. They’d want Torchwood to continue to be a good agency to keep the planet safe when the Doctor can’t. They may even join forces with Kate Stewart’s (Jemma Redgrave) UNIT task force and create something new altogether.

Trying something new: The Doctor’s ex-companions working together

The Power of the Doctor showed us a group of former companions of the Doctor talking and sharing their travel experiences with each other. We’ve already seen many old comrades return, like the Doctor’s first companion Ian Chesterton (William Russell), Jo Jones/Grant (Katy Manning), and even Melanie Bush (Teagan Langford).

Their spin-off can safely be done with the most recent companions, Dan (John Bishop), Graham (Bradley Walsh), Yaz (Mandip Gill), and Ryan (Tosin Cole) since they’re all still alive. They can do exactly what the Doctor told them to do when she gave them their psychic papers. They could travel around the country, or even around the world, and save people from small alien invasions or other supernatural things where the Doctor’s intervention isn’t necessary. They could even be divided into two teams, with the older ones sitting in the base and giving orders, and the younger ones saving the world.

The incarnation of Paul McGann’s Doctor is certainly one that, along with John Hurt’s War Doctor, hasn’t been explored enough in live-action. The Eighth Doctor’s only live-action appearances were in Doctor Who: The Movie as the “main” Doctor, a short-lived prequel to the 50th Anniversary titled “The Night of the Doctor” and as a cameo in the latest “The Power of the Doctor” special episode. While his film was a great teaser for more adventures to come, the thought of no Doctor Who continuation series was something that kept McGann from showing us his full potential in the character.

McGann got a chance to explore his incarnation more, but only through Big Finish’s Doctor Who audio stories. Thanks to Disney+, we could now get a few fill-in episodes, maybe even a whole season, that could do justice to Paul McGann’s Doctor. His audio adventures were great, and surely some of them could be adapted for live-action, but now there is the potential to give us something new as well.

Going into the mind of true evil: The Master anthology

The Master/Missy is the greatest villain that exists in the Doctor Who universe. Every time they appear, we can expect that the Doctor won’t have an easy time defeating and saving the universe from them. There were certainly many interesting incarnations of the Master that lived to see their stories released in audio forms, such as The War Master: Self-Defence from Big Finish.

I have two ideas for the series. The first is to show us the whole origin story from the Master’s perspective: The story of how he and the Doctor were real friends who grew up together until the Master evolved into the Doctor’s greatest enemy. It can be a kind of personal drama that will explore their complicated history in many different ways.

My second idea is to bring back Derek Jacobi to find out how his Master became the War Master and how he lost his memories. We could also see the story of how Jon Simm’s Master escaped after “The End of Time” and made it onto the ship in the last two episodes of season 10. Maybe we could even get introduced to a new Master incarnation that is planning something evil in another part of the galaxy, or even a genuine drama series exploring his psychopathy and depression.

Uncovering the mystery: Spin-Off about the other Time Lords

The biggest mystery of the Doctor Who universe is the Time Lords, especially the history and culture of their homeworld Gallifrey. I don’t want to compare the size of the universes or their cultural impact, but there is the potential for a series that could show us Gallifreyan culture the way Ryan Coogler showed us Wakandan culture through the Black Panther films. With Disney+, we may have the opportunity to learn how Gallifreyans who aren’t Time Lords live in society and what the Time War looked like for them.

The series could easily give us episodes about random characters that would show us exactly what it was like before the Doctor was a known person on Gallifrey. For example, there could even be the story of how the great Rassilon, once a legend of Gallifrey, became a villain unwilling to help the Doctor. I would love to see Timothy Dalton return to the role, as his appearance in “The End of Time” was so iconic and memorable.

Our beloved trio from the Victorian era could certainly get some more time on TV, simply by creating a show about them solving mysteries in England. The main series has repeatedly teased their previous adventures, as well as some future events related to well-known characters such as Jack the Ripper.

Since they were first introduced in the episode “A Good Man Goes to War” in season 6, Strax (Dan Starkey), Vastra (Neve McIntosh), and Jenny (Catrin Stewart) have become one of the fans’ favorite teams to help the Doctor. In my opinion, there’s no need for the Doctor to even appear in the series, because their adventures, interactions with “normal” people, and exciting historical events would certainly be enough to make the sci-fi period piece worth watching.

River Song (Alex Kingston) is one of the most iconic characters when it comes to the New Who era. For a long time, she was the most mysterious character, and she remains unmatched in many ways. We saw how important she was to the series in seasons 4 through 7, and in season 9 she helped us discover a more unknown side of the Doctor’s character.

A live-action River Song spin-off could explore her solo adventures and team-ups with various Doctors, which have been teased so many times through Doctor Who. Of course, like many other companions, villains, and other characters, River Song got her own audio series, but there is still a large number of events that we haven’t gotten to see or hear. More stories about River Song and the Doctor could certainly appeal to many fans, bring them to tears, and inspire them to rewatch all of New Who again.

More exploring of the universe: Ashildr and Clara’s journey

My last spin-off idea is the story of Ashildr (Maisie Williams) and Clara Oswald (Jenna Colman). In the last episode of season 9, Clara is brought back from death by the Doctor (Peter Capaldi), but to keep her alive, he had to lose all his memories of her. The final minutes of the episode reveal Clara and Ashildr deciding to explore the galaxy in their own Tardis, experiencing their own epic journeys without the Doctor.

It’s not a must-have spin-off, but I’d be really happy if we found out what exactly happened to the two impossible girls from the Doctor’s life. The story could span both the past and the future. If this spin-off actually gets made, I hope it comes with a lot of “Wibbly wobbly, timey wimey” type stuff.

The universe is a wretched hive of scum and villainy: Cybermen, Daleks, Weeping Angels, Sontarans, and Sea Devils

According to Mirror, Doctor Who may get a spin-off about their classic villains straight from the Whoniverse. Mirror’s insider said that:

“Fans can expect to see Sontarans, Weeping Angels, and Sea Devils in separate series showing what they get up to when the Doctor isn’t there to stop them, along with Daleks and Cybermen.”

So alongside the previous spin-off ideas I mentioned, we can expect many more interesting stories that’ll surely expand the lore and current events of the Doctor Who world.

Doctor Who is now in a position to become another worldwide franchise just like the Marvel and DC Cinematic Universes because, with Disney’s money and streaming service, fame is waiting just around the corner. The possibilities are endless for what form the Doctor Who spin-offs can take.

What do you think about my ideas for the possible Doctor Who spin-offs? Let us know on Twitter, The Cosmic Circus Discord, or other social media! If you haven’t already, check out Sam’s article about his journey into Doctor Who.

Doctor Who Day: My Whovian Journey