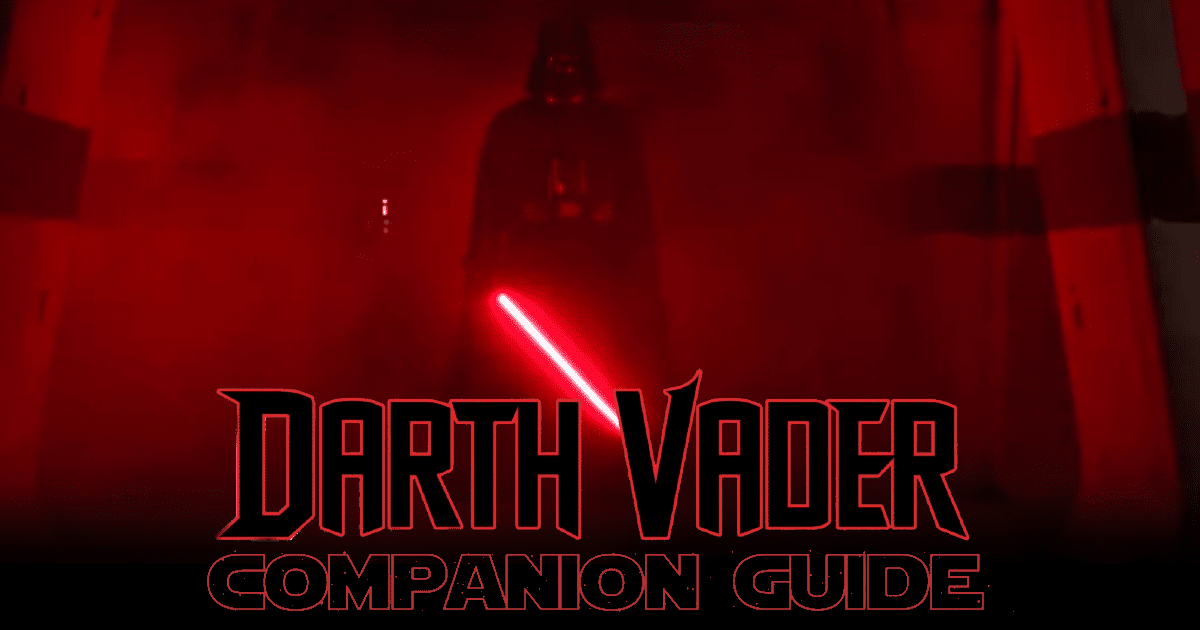 Hello readers, and welcome to the companion guide for Darth Vader!

Emily already did a tremendous job in bridging both images and words strewn across the galaxy about the famous Jedi Master Obi-Wan Kenobi. Darth Vader, despite being a huge presence since the moment he stepped onto screen, only got his first solo comic in 2015. The 2017 Darth Vader comic by Charles Soule picks up right before the credits roll in Revenge of the Sith showing his full conversion to the dark side and that’s what I am exploring today.

Vader (2017) begins the threads for key moments as he commands the Inquisitor program, obtains his red lightsaber and sees the Death Star go into construction. Rather than a linear guide of getting you from Point A (ending of Revenge of the Sith) to B (Obi-Wan Kenobi / Star Wars: A New Hope), I chose sections that highlight moments in the tribulations of Darth Vader.

The depth of Anakin and Obi-Wan has already been covered here. But knowing how relevant the character Darth Vader will be to the Obi-Wan Kenobi series inspired me to make this supportive collection of games, comic books, and novels.

The May 4th trailer for Obi-Wan Kenobi ended with his iconic inhale/exhale through the suit. Since he’s going to be a strong presence throughout the series, I felt it my duty to focus on some things the series will inevitably touch upon.

Most important is Anakin’s transition into the Dark Lord and how the Emperor fuels him to sever his connection to the Light Side. This evolves into the further persecution and hunting of Jedis by Vader’s enforcers, the Ten Brothers and Sisters. In the quick start, I suggested the full Soule run as it covers every topic that follows below, and the Jedi Purge is a powerful one-shot that establishes the tone for the rest of this guide.

As always, strong recommendations are in bold. Have fun reading and playing!

“You don’t know the power of the Dark Side.” The Jedi Purge / Rise of Inquisitors

Among his many roles, becoming the Grand Inquisitor and overseer of the program was one of Vader’s first. Completing the objective of Order 66 remained integral to him as directed by the Emperor. His strong connection to the Force allowed him to snuff out many Jedi that had eluded the Empire over the years.

With many Jedi still lingering across the galaxy, Vader prepares his enforcers through brutal methods. Showing very little mercy, he goes as far as slicing limbs off of his Inquisitors in training to ensure they do not make the same mistakes again. His experience with the Order made him the most suitable to act as Governor of the program, having a Grand Inquisitor directly reporting to him.

In Jedi: Fallen Order the player-character Cal Kestis manages to steal a very important Holocron that is a map showing Force-sensitive children across the galaxy. The game does a great job of showing how tough Inquisitors really are, and at the end, you get a taste of fighting the Dark Lord himself.

The encounters against the Second and Ninth Sister are already difficult and facing Vader is impossible, the only option is to retreat. Easier said than done, but the ending (video below) sets up an intriguing sequel that I am already eagerly awaiting.

Darth Vader had to constantly contend for his spot, and more than once, the challenge was orchestrated by Emperor Palpatine behind Vader’s back. Ensuring his choice in apprentice was correct, Palpatine would employ rivals to test if Vader would stake out missions for his own personal gain.

In both The Force Unleashed titles, he worked towards displacing Palpatine and taking the Empire for himself. Depending on the choices you make as Galen Marek (aka Starkiller), you can either become a martyr for the budding Rebel Alliance or a replacement to Vader – cybernetics included.

In the sequel to The Force Unleashed you’re a clone of Starkiller hell-bent on revenge against his former Master for tossing him aside. These stories give you a good glimpse into the unforgiving nature of the Empire and by extension – Darth Vader himself.

Funny enough, if you have Starkiller sacrifice himself for the Light side, his family crest is used as the iconic symbol for the Rebels. Fortress Vader is where Emperor Palpatine presents Vader with a chance to fully embrace his new role, because at this point he’s destroyed many Jedi and much of the hope across the galaxy. The satisfying conclusion to that story arc and 2017 comic run gave me the hunger to start this guide. 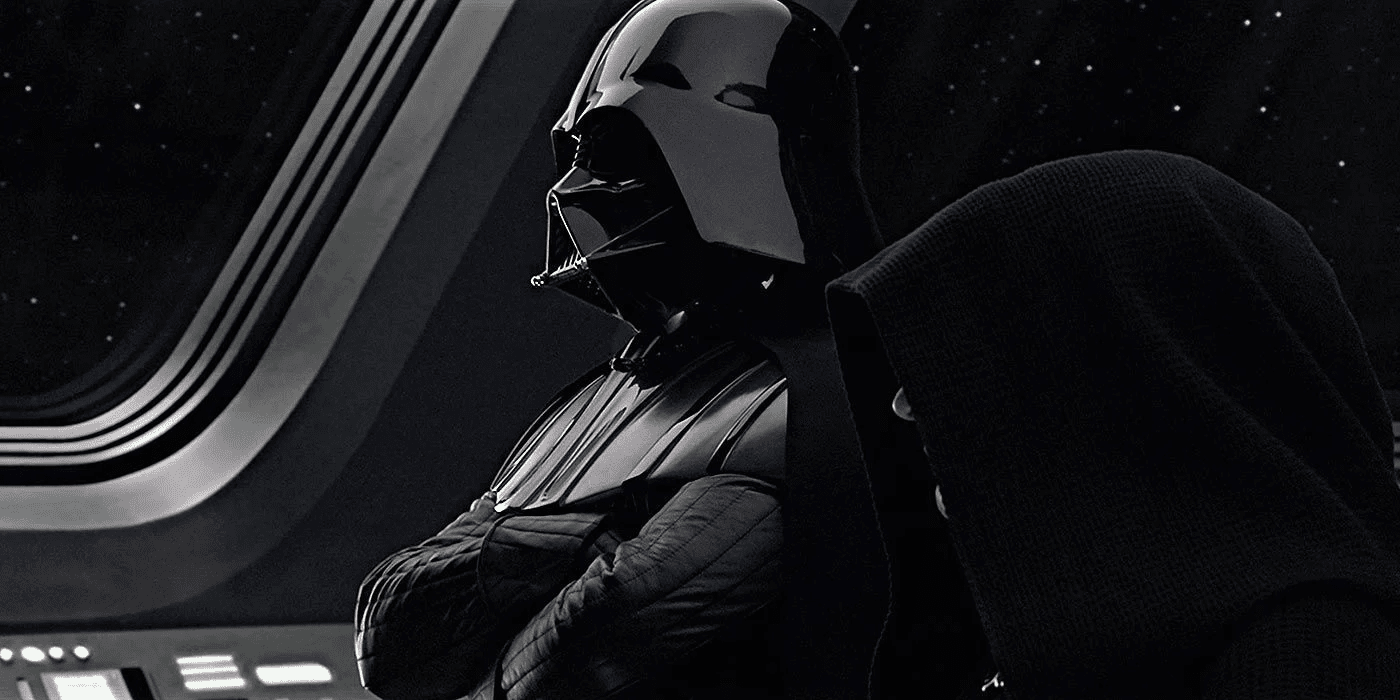 Before he was feared throughout the galaxy at the mention of his name, the mystery behind Vader was quite large as he seemingly popped up at the Emperor’s side overnight. Constantly underestimated and spoken down to, Vader does not hesitate to squash any doubters.

Starting with the attempted rescue of Moff Tarkin’s son and ending with an ambush, he punishes those who would betray him or the will of the Emperor.

In Purge he begins forming his own legend by taking down 8 Jedi single-handedly but as the story spreads, that figure jumps to 50. Dark Visions is a collection of five stories told from different points of view that elevate his villainy to the level we know him for (Dark Visions also features Vader on horse-back, which is just plain badass).

Darth Vader and the Cry of Shadows is another 5 part miniseries showing just how influential he becomes. The variety in seeing him through the lens of others helps seal how much he turned in Revenge of the Sith.

If you feel like wielding his strength for yourself, slide into the future with your VR set and jump into Vader Immortal where you can pull enemies into the air and deflect blasters with a lightsaber. And with that, you can now squash the Rebel Alliance – just kidding – but with this primer, you’re ready to see Vader again. When Obi-Wan Kenobi airs later this month on Disney+, you’ll have been exposed to the inquisitors which are an exciting addition to live-action Star Wars. The motivations as to why he won’t stop pursuing Kenobi are now known to you, as well as how he became the 2nd most feared man in the galaxy.

Will you be picking up a book or controller first in my supplementary guide to Vader? Let me (@Redovah_) or Emily (@emilymcd11) know on Twitter! Follow @MyCosmicCircus as well, when we begin covering Celebration and the new streaming series later this month.

That’s everything that will catch you up on what Darth Vader has potentially been up to before Obi-Wan Kenobi. The series starring Ewan McGregor and Hayden Christensen releases the first two episodes on May 27, 2022 on Disney+.