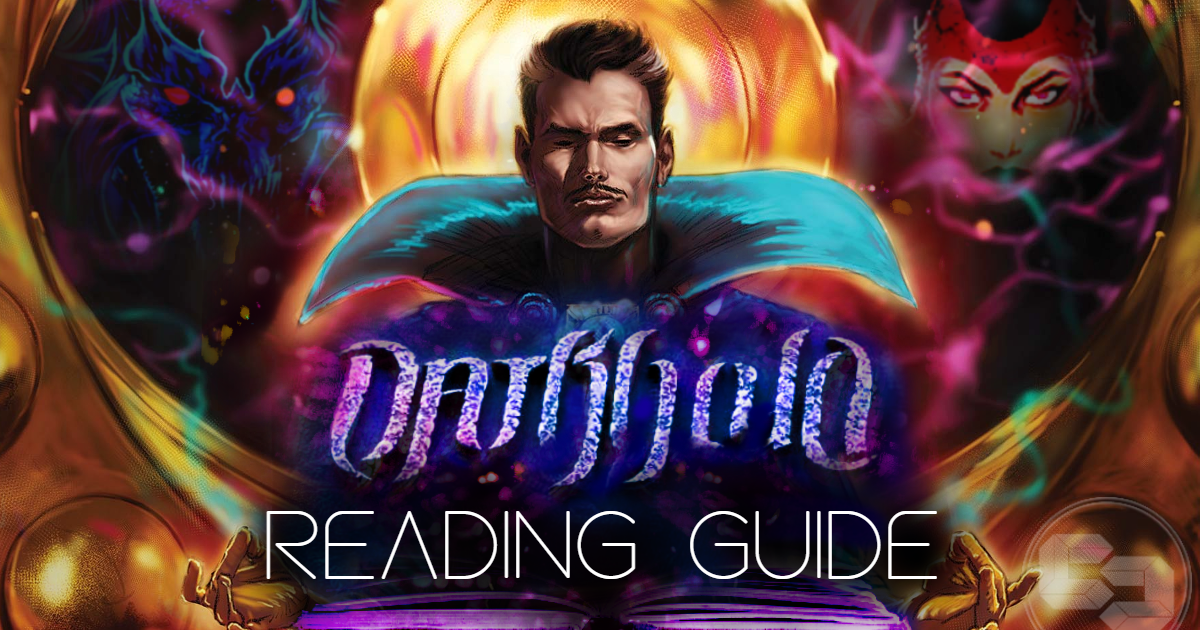 This article is the NUMBER ONE most important reading guide for Doctor Strange in the Multiverse of Madness. In the selections below, we’ll learn about Doctor Strange and Wanda Maximoff’s history with the Darkhold, as well as the demonic elder god Chthon, the Book of the Vishanti, and much, much more.

These 43 issues cover everything you need to know about Doctor Strange, Wanda, and the Darkhold to be primed for the movie coming out this May.

If you’re excited about Wanda specifically, then check out our Scarlet Witch reading guide! For stories about the different universes and characters we expect to cameo, we also have a Multiverse of Madness reading guide as well. But if you want to dive even deeper into the history of the Darkhold, then check out the reading guide below. Listed here are every major story involving Doctor Strange and the Darkhold that may be critically important for the upcoming movie. Strong recommendations are in bold. Enjoy reading!

Following his first appearance in 1963’s Strange Tales #110, Doctor Strange proved to be such a breakout hit that the comic was retitled from Strange Tales to Doctor Strange with #169. With work from the superstars like Stan Lee, Steve Ditko, Dennis O’Neil, Roy Thomas, and Gene Colan, this is still a high point for the character. Most relevantly for our discussion, this run introduced the Book of the Vishanti, which we exclusively confirmed would serve an integral the role in the upcoming movie. 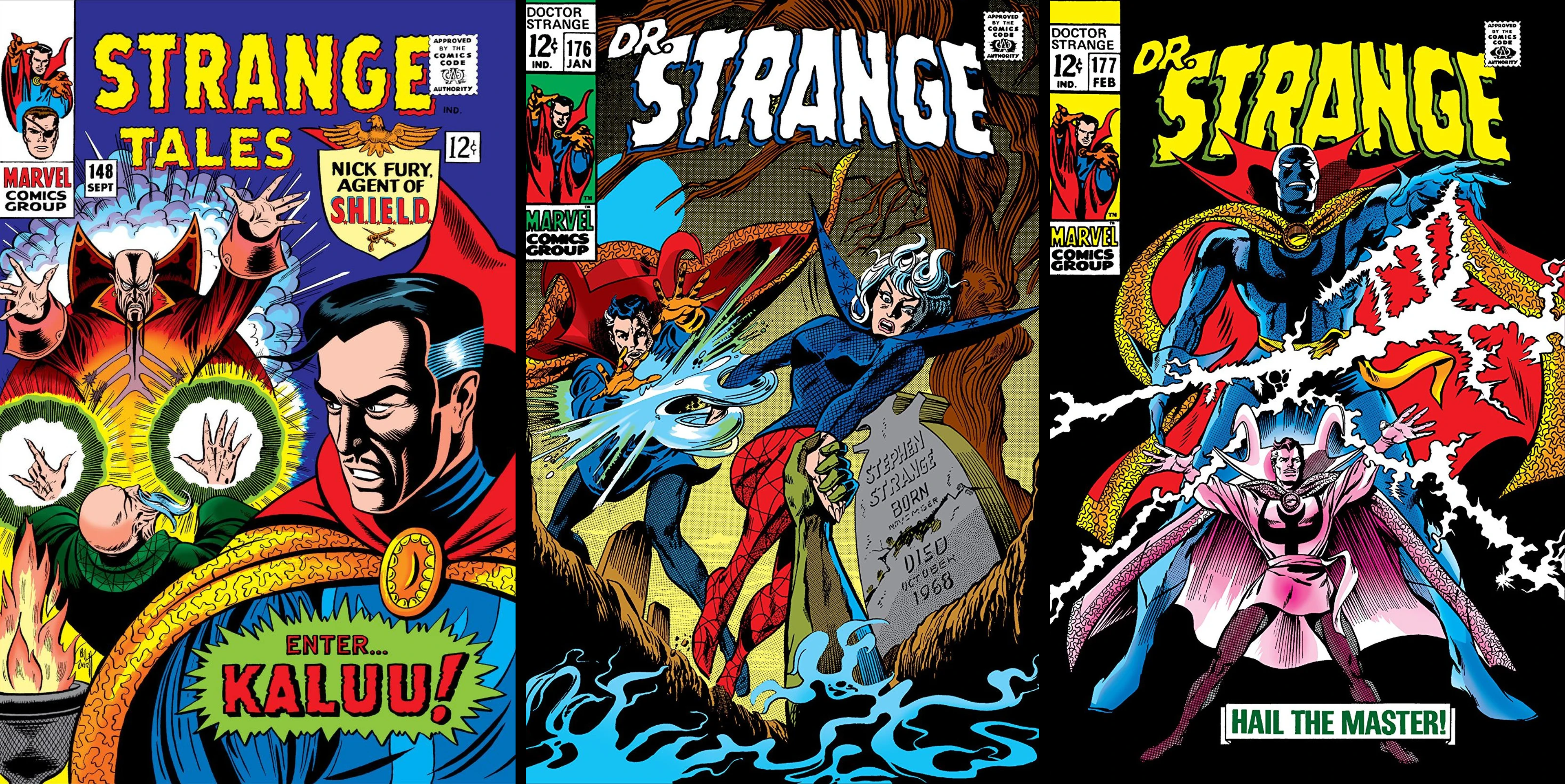 Introduced a few years later, the Darkhold is the sinister book of dark magic that MCU fans might recognize from WandaVision, Agents of SHIELD, or Runaways. Aptly nicknamed “the Book of Sins,” the Darkhold is the collection of evil spells archived by Chthon, the Lovecraftian demon god who pioneered dark magic in the Marvel comics universe. In the comics, this entity is responsible for everything from possessing Wanda to creating the werewolves and vampires that haunt the Marvel universe!

This stellar collection includes the first appearance of the Darkhold, the first appearance of Chthon, a Werewolf By Night/Dracula crossover, a Thor/Dracula crossover, and two of the greatest Darkhold stories ever! Some of my favorite hidden gems are a short story from Dracula Lives #6 and the complete history of the Darkhold & vampirism from the pages of Doctor Strange, Sorcerer Supreme. Although the comics are from separate series and even different decades, the issues connect to each other seamlessly into one cohesive Darkhold saga.

In “Nights of Wundagore,” we learn about the dark origins of Wanda Maximoff and the Darkhold, and the deep connections between them. Following that, “The Montesi Formula” picks up the story with a hugely important story where Doctor Strange tries to use magic to wipe out all the vampires across the Marvel universe, with guest appearances by Wanda, Blade, and Monica Rambeau as Captain Marvel.

Lastly, Doctor Strange #81 details the first appearance of the green minotaur Rintrah (seen in the Doctor Strange in the Multiverse of Madness trailer!) in the same storyline where where the Cloak of Levitation rips and needs to be repaired (remember the Cloak has a new blue patch, also seen in the trailer!). If you are going to read one book from this list, Rise of the Darkhold is a great option. Jumping ahead a few years in time, the next relevant book is the Doctor Strange, Sorcerer Supreme series. The run was launched as a continuation of Peter Gillis’ Doctor Strange series from the 1970s, but Roy Thomas quickly takes over again by issue #5, leading to another stretch of Doctor Strange comics which seem to have been essential influences on the new movie.

This run is your #1 essential reading for Rintrah, Doctor Strange’s green minotaur friend. See below for further reading.

Featured in several major storylines in a row, the Darkhold and the Book of the Vishanti were wildly important during Roy Thomas’ second run, as well as our green friend Rintrah and even a few guest appearances by Wanda. If you want Doctor Strange stories specifically, then Doctor Strange, Sorcerer Supreme is the best run for you. 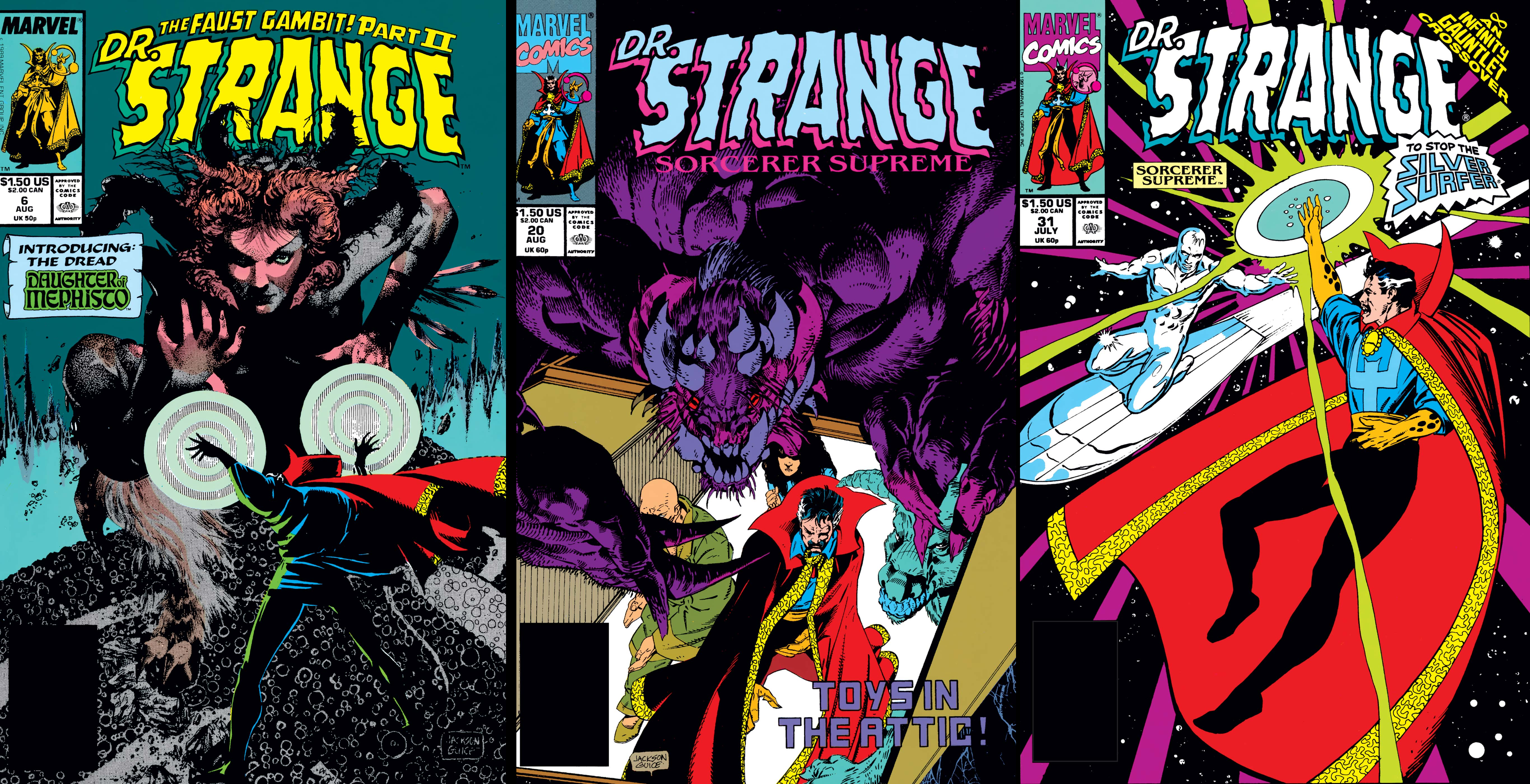 Coming into the 90s, Doctor Strange and the Darkhold entered the world of the Midnight Sons with Darkhold: Pages From The Book of Sins, a 16-issue maxiseries that tied into all three Midnight Sons crossovers (Rise of the Midnight Sons, Midnight Massacre, and Siege of Darkness). In the series, a team called the Darkhold Redeemers attempt to undo the damage caused by Chthon and the Darkhold. The first seven issues include Strange, Wanda, Chthon, and even Agatha Harkness herself. It probably won’t be vital to the new movie this May, but might come in handy later on in the MCU!

Cosmic Circus writer Emily Maack recently finished Pages from the Book of Sins and highly recommends it. Her review: “I loved it! Usually the style of old comics throws me off and characters I don’t know turn me away, but I really liked this and was invested. It’s an exciting action-horror story and a great comic to learn more about the Darkhold’s history.” 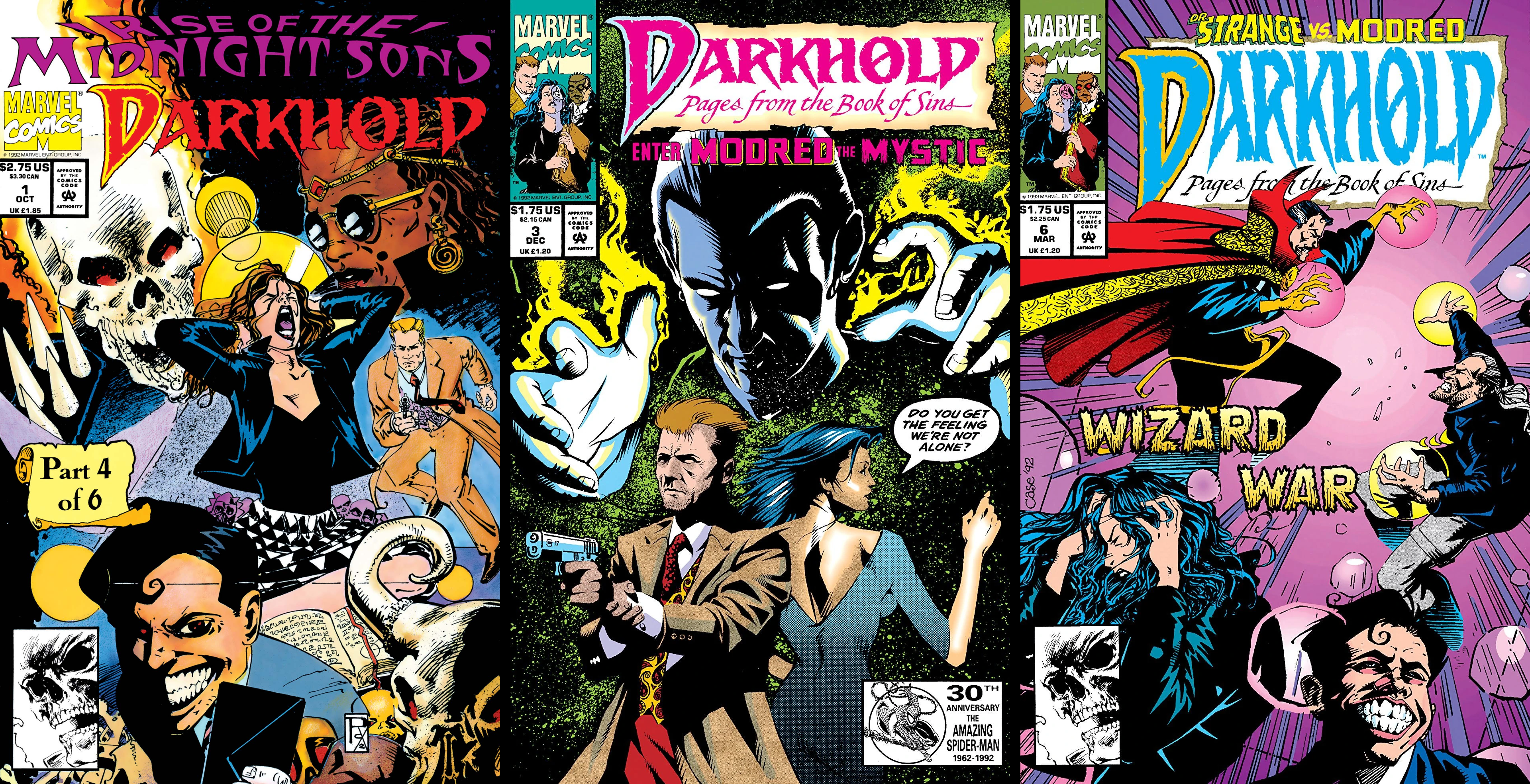 Being corrupted by the Darkhold is no walk in the park. Mortal readers can become twisted, tormented shells of their former selves – sometimes literally!

Gathered here are a few stories that showcase the terrifying effects of the Darkhold on its reader. Do not tread lightly, as these are works of pure horror and tragedy. In the first story, Blade becomes “Switchblade” after reading just a page. As he massacres his fellow Midnight Sons on his quest to find the rest of the Darkhold, is there anything that can stop him? In the second story, Wanda Maximoff leads a band of heroes in the ultimate battle against Chthon. But to do so, they must each read from the Darkhold and overcome its temptations. Will Wanda be able to help save them, or will the Darkhold Defenders become the Darkhold Defiled? 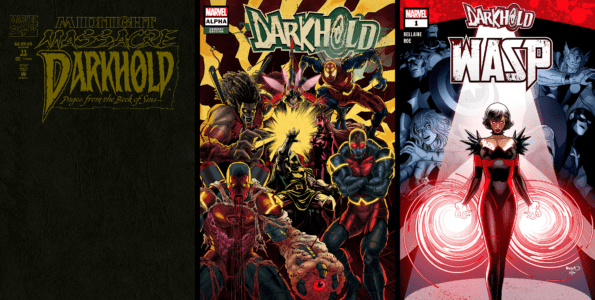 And those are the major Doctor Strange/Darkhold stories you need to know before Doctor Strange in the Multiverse of Madness! What are you going to pick up next? Let me know on Twitter @vinwriteswords and remember to follow the site @MyCosmicCircus!

Continued from above, here is the complete, first-ever RINTRAH READING GUIDE! Rintrah might be a practically unknown character for most modern readers, but he was HUGE in the 90s. First appearing in the final pages of Doctor Strange (1974), this green goliath was a major player in the Doctor Strange, Sorcerer Supreme run from 1988-1993. During these five years, Rintrah crossed over into any and every book imaginable, leaving behind a lasting impact that’s finally paying off 30 years later with his live-action debut in Doctor Strange in the Multiverse of Madness. We are so excited to see this character to come to life, so here are the comics to check out if you want even more Rintrah today!