Adam Barnhardt is no stranger to comic books. He’s been reading them since he was young and by day he writes at ComicBook.com. Barnhardt is also the creator behind the Lunchroom Riot RiotVerse, a world he first envisioned about five years ago. In an interview on Monday, I talked to him about his new project on Kickstarter, Macabre Mel, and his creative philosophy.

To listen to the full audio interview, check it out below, on Spotify, or where most podcasts are available. Highlights from our chat are below.

The RiotVerse started with a pitch for Sh*tshow #1, a story that introduces folks to the Magnificent McCoys. Barnhardt elaborated on his inspiration behind some of the characters.

“So the proper journey of Sh*tshow began during… It’s actually it’s funny because it’s called Sh*tshow, and is pretty organized. The story I tell everyone is I was watching Shameless and the idea was like, what if Frank Gallagher had superpowers? What kind of wonky stories could we get into? And then, of course, that kind of expanded and grew into what happens if the entire Gallagher family had superpowers? But the basis of the story was that they’re not necessarily bad people, they’ve just been put into bad situations, or less than average situations, or something of that nature.”

Macabre Mel takes place between Sh*tshow #2 and Sh*tshow #3. If you’re not familiar with the character or the universe, there’s a handy reading guide on the Lunchroom Riot website. Here’s how Barnhardt describes the story of Mel:

We officially have less than two weeks to reach our funding goal on MACABRE MEL: WICKED SALVATION!

Mel is dead. Luckily, Mustru-Ratu can revive her. She only needs to kill Lucifer and lay claim to an ancient relic that controls all of space and time. Easy enough, right?

Barnhardt says that Macabre Mel is a story that was borne out of writer’s block while working on his other projects. He also described his journey to the new character and the novella.

“Yeah, yeah, she finds herself dead. And I always knew she was gonna come back. It’s comics, everyone comes back. But she doesn’t come back fully. There’s changes, there’s a sword involved, and so on, and so forth. But I’m like, man, well, she’s a total badass, we have to, we have to tell the story of how she comes back. So when I would, like you said, when I would get burnt out, when I would run myself into a corner or whatever, I’d get writer’s block on Sh*tshow.

I’m not sure if you can tell just by talking about talking with me, but I certainly have attention issues. So I bounce around anyways. But so I would bounce between Sh*show Volume One and Macabre Mel, you know, writing ideas and stuff. And one of these ideas were like, no matter what she needs to go to an underworld, that underworld we decided was hell, and Wicked Salvation was born. You know, we wrote a short story about Lucifer. And we wanted to kind of tie everything together, you know? So yeah, Macabre Mel: Wicked Salvation, she goes to hell to battle the devil for the right to her soul, so she can come back and save her friends – which she does in Sh*tshow three.”

The tale of Macabre Mel is not the only story Barnhardt has planned for the future. The RiotVerse is expanding. He told us a little bit about his plans for 2023 and 2024 in the full interview on the podcast. This includes three new issues of Keepers of the Cosmos, starting in April and published by Scout Comics. 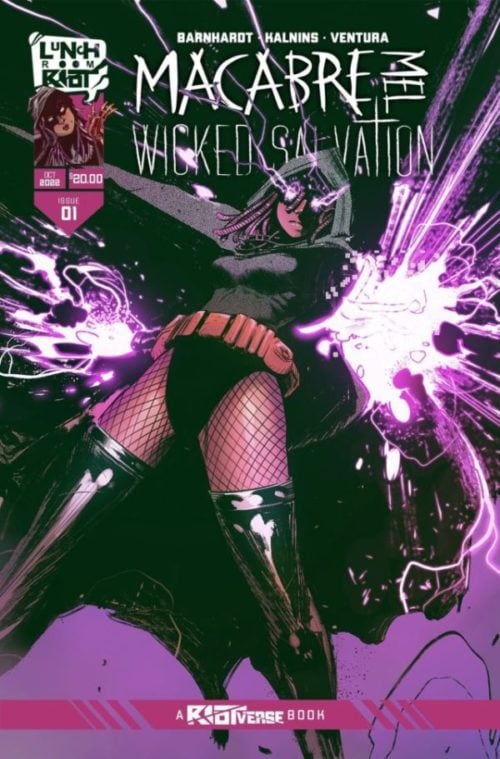 Making comics isn’t a solo project and Barnhardt is full of praise for the artists he’s worked with. For Macabre Mel, Rolands Kalnińš did the interior art while letters were done by Marco Ventura. Four gorgeous covers were created by Juan Angel and a special 5th perk cover was done by Federica Mancin and Marta Gasperoni

“But comics are very much you know, our own, it’s your and in my own, not just mine or yours, you know. It’s sharing these characters in these stories with everyone else and you have to work with someone who’s open to tweaking their own work, and you also have to be open yourself to receiving the criticisms from – I’m not sure if their criticisms – but you have to be open to bending your own script and words to mesh with the style of the artist or ideas.

Every single artist I’ve worked with has elevated my scripts fully. I have never had – knock on wood – I have never worked with an artist that’s been a pain in the ass. Everyone’s… like what I’m working on with Macabre Mel right now. Rolands is a phenom. He understands comics, he is a full-on comics artist. I give him the scripts, I give him very little direction on the scripts. And he- sometimes he’ll throw in two or three extra panels, and I’m like, I’m such an idiot for not thinking of that. That makes the story that much better. So you’ll come along situations like that. But that’s one of the good things about comics, you know. It’s such a collaboration. Each comic has at least three creatives involved, you know, between the writer and you know, some comics will have five with writer, pencils, inks, colors, letters, editors. So that’s something I enjoy a lot about it.”

If you’ve spent some time on the internet, then you know that Kickstarters come with unique perks. And if you back Adam Barnhardt’s Macabre Mel you’ll get some of the coolest ones we’ve seen out there. That’s right – Pogs, the 90s milkcap game that are long overdue for a resurgence. The first batch of RiotVerse Pogs went out earlier this year, but are back as a perk for Macabre Mel: Wicked Salvation. And the second wave of Pogs includes character art from the novella itself. 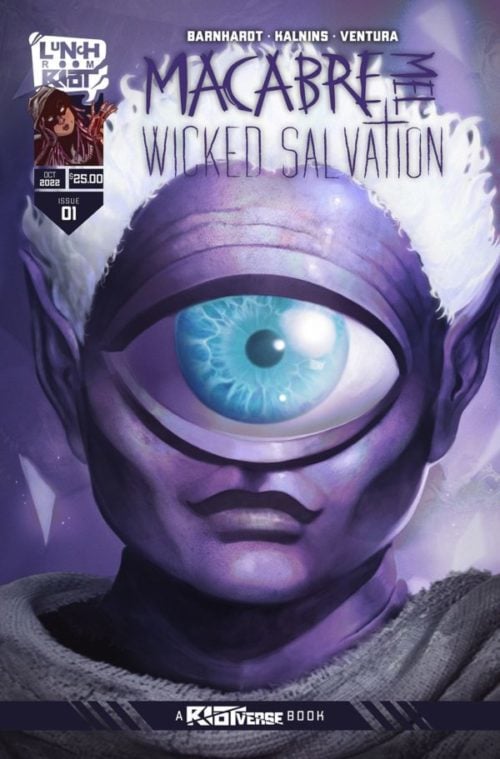 You can read more about Lunchroom Riot’s RiotVerse and support Macabre Mel: Wicked Salvation over at Kickstarter.  But the campaign ends on October 31st, so delay on backing this wicked project.

Scroll up to the top here if you haven’t already to listened to my full Cosmic Cafe podcast interview with Adam Barnhardt. He talks much more, not only about the RiotVerse, but about creating comics, being an indie comic creator, and working with Scout Comics. If you are a fan of creators and what drives them, this full interview is definitely worth checking out.