Want me to let you in on a little secret? There are some huge comic book fans here at The Cosmic Circus. It’s one of the passions and drives that brought us all together, the deep love that we have for all things nerdy. So when Editor-in-Chief Ms. Lizzie Hill offered us the chance to hold a comic book club, we jumped at the opportunity.

It’s because of this club and a desire to learn as much as possible about MCU heroes that brought me, other writers, and fans together to devour the Ms. Marvel debut comic run by G. Willow Wilson this past month. Is Kamala Khan’s first series worth the read? You don’t have to stretch your imagination to answer that question.

[Warning: Spoilers from Ms. Marvel by G. Willow Wilson are below!]

Where we begin following Kamala’s story is a place that every adult has been: A high schooler who feels awkward in their own skin. She is someone who works hard to do well in school, gets picked on by the popular kids, and is always hungry for food. Split between her dreams of being a hero and the duty she feels towards her family, Kamala is constantly in conflict. Everyone can relate to these feelings in life, especially during high school.

Kamala’s normal life goes up in smoke when she becomes engulfed by a Terrigen Mist while sneaking out of her house. Cocooned in a pod in true Inhuman fashion, Kamala exits with powers beyond her wildest dreams. Terming her powers as “embiggening,” she becomes a polymorph, which is just a fancy way of saying that she can stretch her body, shape shift into other objects or beings, and also demonstrate some form of healing abilities.

Inspired by her idol Captain Marvel aka Carol Danvers. Kamala takes on the mantle of Ms. Marvel and begins a journey to save the world, starting with Jersey City. 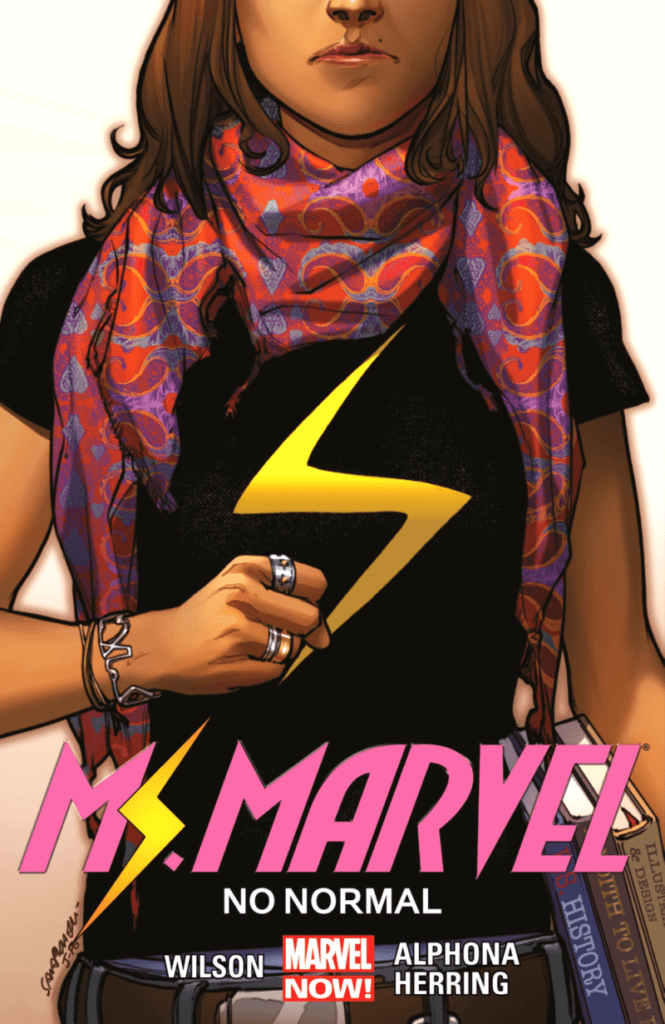 Her adventures bring her into conflict with some of the strangest villains in Marvel comics. The Inventor/Mr. Edison stands out as one of the craziest villains I have ever seen in a comic. A genetic mix between Thomas Edison and a cockatiel, The Inventor experiments on children. He hopes to create a new power source but isn’t afraid to kill children to do so.

This comic run takes Kamala Khan through some important events in Marvel comics. Readers follow her as she tackles Civil War II and eventually finds herself at the Last Days. Last Days has to be one of my favorite arcs of Ms. Marvel, leading into Secret Wars. Both of which are some of the best stories in modern Marvel Comics.

The best parts of Ms. Marvel by G. Willow Wilson

The entire time I was re-reading this series, I was overly impressed by the extraordinary writing by G. Willow Wilson. She captured all the best and worst parts of being an awkward teenager with superpowers. Ms. Marvel has this ability to be grounded in Kamala’s experiences while also being larger than life through the powers and villains she battles. Many times I saw myself in nerdy Kamala, trying to survive high school, and desperately wanting to fit in.

The message of finding yourself and learning to be alright in the skin you were given hit hard for me. As a member of the LGBTQ+ community, I felt that same way many times throughout my life. The circumstances may be different, but the emotions are similar. Without being re-traumatizing, Ms. Marvel helps the reader to experience those emotions once again but reframing them positively. The astounding message is that everything is going to be okay if we learn to accept ourselves, limits and all.

I also love that this comic series didn’t shy away from the cultural aspects of Kamala’s life. As a Pakistani-American Muslim, Kamala comes with a rich culture that influences her teenage life in many different ways.

G. Willow Wilson embraces these aspects of Kamala’s life instead of shying away from them. Wilson handles Kamala’s background with humor and grace, sharing a culture and religion that some readers might not be familiar with. For being one of the first Pakistani-American superheroes to headline their own series, the representation that those who write and draw the series brought to the world is fantastic in every way.

For all the wonderful aspects of Ms. Marvel’s debut comic run, there were some parts that just didn’t work for me. While Ms. Marvel dived deep into a new and colorful world, her villains felt too odd. I totally understand the idea of branching out the villains and making them over-the-top in a comic book world, but a half-cockatiel/half-Thomas Edison clone felt too weird for what I wanted out of this series.

I understand though that making brand new worlds and villains can be difficult to do. The villains did not take away from the overall experience; they just added some oddity to the otherwise grounded world that we see Kamala operate in.

As an adult, I loved every issue of this series and I imagine younger readers will feel a connection with it as well. In line with characters like Peter Parker a.k.a Spider-man, Kamala is a completely relatable teenager who just happens to also have super powers. Every issue had real-life situations that I, and probably everyone else, have experienced. Moments that have made us laugh, cry, and cringe harder than we would like to admit.

If you haven’t read Ms. Marvel yet, I implore you to try it out. The artwork is fantastic, the writing is top-notch, and the story is so full of heart. Share the treasure with your family, just don’t pass it up! For more on this comic series of Ms. Marvel and more, check out Vin’s fantastic Ms. Marvel reading guide! As always, let us know your thoughts over on Twitter!

My rating for this comics series: 9/10

Ms. Marvel 2014-2015 is available on Amazon (Link is to Vol.) and on Marvel Unlimited. For more information about Ms. Marvel Kamala Khan visit Marvel.com.