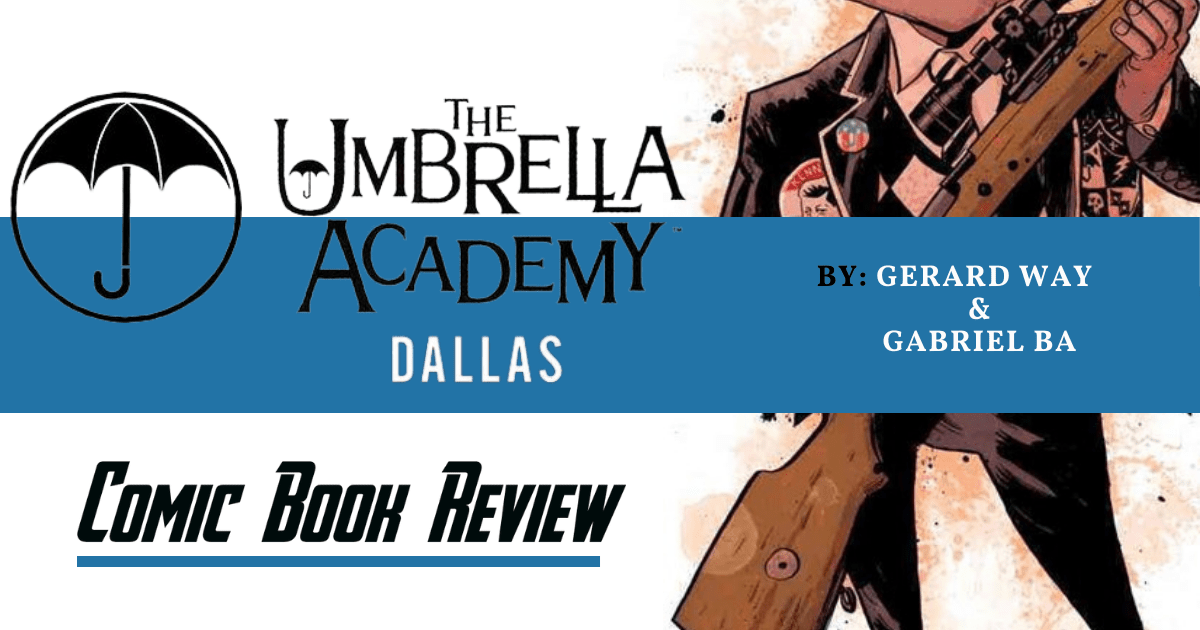 In The Umbrella Academy – Dallas, Gerard Way shows us how our super family tries to pick up the pieces and move on after a brutal family feud. Some are doing better than others but no one is really doing well. Then comes the apocalypse, again. This time the Umbrella Academy has to travel all the way back to the 1960s to change a very important (non) event. Once again their family drama gets mixed in with their mission and endangers everything.

Can they pull it together in time to save the world? Can they even agree on what will save the world? And will Gerard Way please get them into family therapy before they kill us all?!

[Warning: My review of Gerard Way and Gabriel Ba’s The Umbrella Academy – Dallas contains some spoilers!]

A family in pain

The Umbrella Academy – Dallas picks up where Apocalypse Suite left off. The Umbrellas are not doing well – all having been scarred by their previous apocalyptic battle. They’re moving forward in time but most are not moving forward through the trauma they had to face in the final battle.

Allison especially has a hard time dealing with Vanya’s betrayal. In an interesting twist, she moves Vanya to a basement medical ward and is caring for her personally. Vanya seems to have no memory of her family at all or any of her actions regarding the apocalypse. Allison finds this unacceptable and forces Vanya to face what happened and her role in it.

Meanwhile, Number One, Luther, is supposed to be their leader but he does nothing except watch reality TV and eats all day. Some of the Umbrellas enable his destructive behavior but others crave guidance from him that never comes. This vacuum causes rising tensions between the Umbrellas.

Complicating matters, Number 5’s dodgy past catches up with him. Apparently, he was part of a shadowy timeline protection organization who have tasked him with killing John F. Kennedy. But he didn’t.

Turns out this is bad for the world and will set off another apocalypse-level event unless he fixes his mistake. This sets the Umbrellas off on a whirlwind time-travel adventure. Half the family is trying to eliminate JFK and the other half of the family is trying to save him. Who knew that a horrific event in American history would be the center of a family feud!

If you’ve been watching the Netflix series The Umbrella Academy, you might recall some similar plot points in season 2. The show is not a direct adaptation, however.

Way incorporates numerous twists and turns to keep the reader guessing as to which side will win, and even which side should win. There are some tantalizing tidbits dropped throughout the story about events that don’t seem to fit in yet. I imagine they’ll eventually make sense, however, in the short term, they just felt weird and detracted from the storytelling. Time travel remains a sketchy plot device for me. It always leaves the infinite loop paradox on the table, making the story hard for me to digest.

Gabriel Ba created the Umbrella Academy world in Apocalypse Suite in a distinctive style. It blends cartoon and menace in a way that perfectly fits the tone of the Umbrella’s story. He continues to use this style in Dallas, providing consistency across volumes which for comic books can help the experience. His use of sharp angles and dark outlines bring to mind Saturday morning cartoons that need some Zantac. I still prefer a more realistic style of art but also see that the style captures the tone for Umbrella Academy perfectly.

The Umbrella Academy – Dallas: to read or not to read

Overall, the story is another peek at a highly dysfunctional family that the world is depending on for survival. If time travel doesn’t give you indigestion, go ahead and enjoy Ba and Way’s second installment in The Umbrella Academy comic book series. If it does and you’re out of Tums then sit this one out. An early spoiler, it won’t interfere with your ability to enjoy future installments of The Umbrella Academy if you miss this one.

The Umbrella Academy – Dallas by Gerard Way with art by Gabriel Ba is available on BAM! and other booksellers now! [As affiliates of BAM! we may receive a commission from purchases made via the above link]