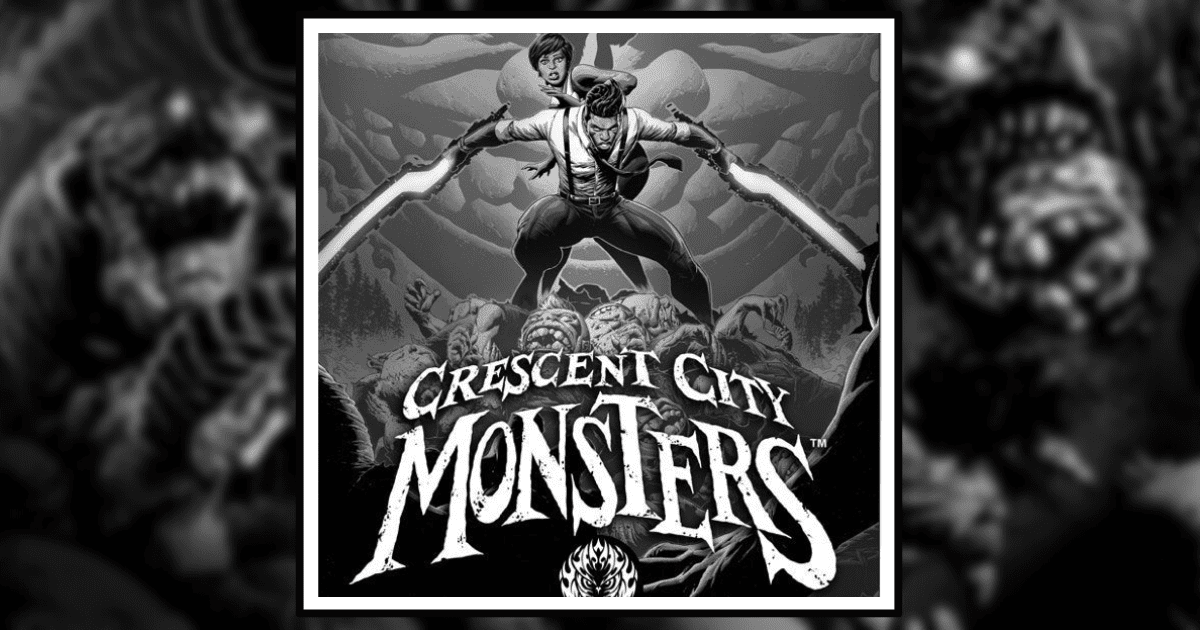 In our current day and age, comic books and their adaptations have taken over the entertainment industry. If it isn’t a new film coming out, it’s a TV show or a video game to fill the gap. While Marvel and DC lead this charge, many other companies and publishers are fighting for their products to get noticed within the white noise of comic mania. I, like so many others, have specific series and characters I love to follow and don’t stray too far from those – because frankly, there are so many and not nearly enough time to read them all. Every once in a while, a title will jump out at you, enticing you to open its pages. For me, that’s Crescent City Monsters.

Crescent City Monsters Vol. 1 collects the first four issues of the comic series and is written by Newton Lilavois, and illustrated by Gian Carlo Bernal. The comic tells a sweeping story of magic, family, and a world bigger than our own, set in the beautiful and haunting New Orleans. So is this comic series your next read? Find out for yourself as we explore what Crescent City Monsters brings to the table.

[Warning: Spoilers from Crescent City Monsters are below!]

This comic series opens in 1963 in New Orleans, at a crucial moment in the delicate balance between the world of Monsters and that of Men. This is where readers meet Jonas, a music-playing, motorcycle-riding young adult who seems more interested in his hobbies and women than anything else. However, he’s also a magic user and a threat to the forces of evil who want to take over the world.

Because Jonas is such a threat, Dark Mass, an entity that isn’t from the mortal realm, calls for his death. He promises great riches and rewards to the creatures that not only kill but bring the dead body of Jonas to him. The Grunch, creatures that look like goblins mixed with Jabba the Hut, see this as an opportunity to advance their lower status and power in the monster world. So they set off to kill Jonas, or die trying.

The Grunch succeed in their mission, killing Jonas and gaining the power that they so desperately need. However, that is not the end of Jonas’ story. Fast forward to 2006 and readers pick up with Brittany Robateau and her brother, the key to Jonas’ resurrection. The two are orphans, having lost their parents prior to the comics. As well, they are both musically inclined, playing trumpet and singing on the streets for money. They are also practitioners of Creole magic, the same magic that Jonas used.

A new world order and a resurrection

The New Orleans that the Robateau children live in is familiar to that seen during Jonas’ time on Earth on the surface, but the power dynamics within the city are vastly different. Monsters now live among men, although only those who are magic sensitive can see them for who or what they truly are. The monsters are cloaked in magic, appearing human to most people. The Robateau children can see through the magic because of their heritage.

The Grunch also runs the city now, in charge of The Order, which comes off like the mafia for monsters. It’s composed of many factions of different types of monsters, led by Kingsley, the most disgusting-looking Grunch of the bunch. It seems that The Order is barely hanging on under Kingsley control, who recently took over from Queenie, whose been imprisoned by Kingsley.

The comics take a good amount of time establishing the new power regime of The Order under Kingsley, but splice the more important story of Jonas and the Robateu children throughout it. The siblings, using the Creole magic, hoping to communicate with their deceased parents, instead bring Jonas back to life. The promise is that Jonas is the key to everything, hopefully inciting change in the precarious balance that exists.

Also spliced throughout the story is that of Baron Samedi, a spirit who possessed a woman in 2006, but also seems to play a bigger part in the overall story of balance and redemption of men from monsters. Part of his story follows him and Papa Legba in a spirit realm, which is one of the best parts of the story.

The first aspect of this comic series that grabbed my attention immediately when I stumbled upon the author’s booth at Motor City Comic Con was the art. Crescent City Monsters’ art is completely black and white, which pulled me back to the classic monsters from Universal. It felt like something I hadn’t necessarily seen before in a comic series unless you’re talking about old-school newspaper comics. Even though it’s in black and white, with different shades of gray in between, the art has so much richness and depth, that helped to bring the characters and creatures to life.

Besides the art, the story within the pages is also excellent. I was engrossed by it so much, that I’ve read it three times over. I feel like I’m always learning something new or different about the characters, becoming attached to Jonas and the siblings the most in the story. Crescent City Monsters also has great action, with the fighting and magic appearing to come right off the page. I cannot praise this volume enough.

It’s important to note that this series is for adult audiences, with the monsters and action being a bit much for younger readers. There is also a lot of black humor that will probably go over younger people’s heads. But for adults, this is a fantastic comic. Honestly, Lilavois and Bernal knocked it out of the park with this original story from a rich world of monsters and magic.

Crescent City Monsters is available from Dream Fury Comics. Are you interested in checking it out? Let us know on Twitter or in The Cosmic Circus Discord. And if you haven’t already, check out our review for Power Rangers Universe, another excellent read from the world of comics.