In Carrie Harris’ Witches Unleashed: A Marvel Untold Tales Novel, Lucifer has escaped from Hell. In the process, his soul was split into 666 different pieces that possessed 666 recently deceased people. The Ghost Rider has been busy tracking them down and I do mean busy. 657 pieces of Lucifer’s soul have been sent back to Hell, but the next one proves a little tricky, even for Ghost Rider.

He turns to his cousin, Jennifer Kale, and her small coven for help. And when these ladies go after Lucifer they hold nothing back, becoming Witches Unleashed.

[Note: While I am reviewing this novel independently and honestly, it should be noted that it has been provided to me by Aconyte for the purpose of this review. Warning: My review of Witches Unleashed contains some spoilers!]

A family reunion for Ghost Rider and Jennifer Kale

Johnny Blaze was trapped in Hell. When he finally managed to escape, Lucifer hitched a ride with him. The process caused Lucifer’s soul to splinter into 666 different pieces. As the hero in charge of sending evil souls to Hell, the Ghost Rider is, of course, hunting him down piece by piece.

But when he gets to the 658th piece he hits a snag. This particular piece of Lucifer’s soul has the scent of Kale magic to it. What’s worse, it’s in a town where his cousin, Jennifer Kale, and her coven reside, watching over the Tome of Zhered-Na. The ancient book contains some powerful magic and is a doorway for summoning a very powerful and very dangerous demon. Lucifer has tried to get the book before so everything seems just a little too coincidental for Johnny.

When he approaches Jennifer, Satana, and Topaz, they are less than happy to see him. Topaz has never met Johnny before but both Jennifer and Satana have and it didn’t end well. They are disinclined to believe him at first. Jennifer is certain her defensive spells would have alerted her if a powerful family member was in town.

But Johnny manages to convince them in the end. The scary thing is that with Lucifer inhabiting a powerful witch’s body he now has access to his own power, plus all of her magical abilities.

Leaving the party early in this Marvel Untold novel

Once the coven fully grasps the severity of the situation, Jennifer decides it’s time to cut and run. The worst possible thing she can imagine is the Tome of Zhered-Na falling into Lucifer’s hands. And she’s convinced that will happen if they stay.

Topaz and Satana are less than thrilled with this choice. Both women feel like they’ve finally found a home for the first time in their lives and they are reluctant to just give that up. But they originally came together to protect the book and if Jennifer, as the guardian of the book, is going to leave then they are going to follow. 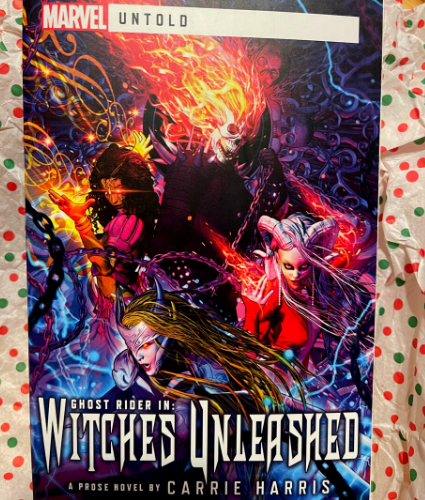 But during the preparations to leave, each woman slowly comes to the realization that leaving is wrong. They love their home and they’re going to protect it with the Ghost Rider. They know they have the strength, what they need is confidence.

Each one has always held back for different reasons, mostly fear of becoming what “everyone” thinks they are. But with Ghost Rider in town, it’s a good time for exercising those demons. And as each woman faces her fears and realizes how wrong they are, their power grows to unprecedented strength. Once they fully throw off the chains that have been holding them back, will the three together be enough to take on Lucifer himself?

Witches Unleashed is interesting because it feels as if the coven has just popped up in a Ghost Rider story at first, but they quickly take over the narrative and make it their tale. These immensely powerful women are each a bit damaged emotionally. Jennifer is being crushed by the guilt of her brother’s death and the weight of her family’s legacy. Satana has some real daddy issues and battles with her internal demons. And Topaz feels the hole where a family should have been and never feels worthy enough because of it.

They came together to protect the Tome of Zhered-Na but initially, it was a matter of convenience, not desire. They didn’t even like each other. But by the time Johnny Blaze shows up talking of Lucifer, they have bonded and become a family, even if they don’t realize it yet.

The stress of their family being attacked galvanizes them. Each woman finally faces the fears that have been holding them back and come away stronger. I really liked how the title played into this idea. In one sense the witches are unleashed because they go and attack Lucifer instead of playing house.

But in the truer sense, they are unleashed because every fear that was holding them down is burned away and they can reach their full potential. It was a very powerful metaphor that I just loved.

Witches Unleashed has a fun style that pulls you in

Carrie Harris has a fun style that I just love. She uses a lot of humor and great visuals when she writes that keep me laughing out loud, literally (my kids sometimes think I’m crazy).

One of the best lines in Witches Unleashed is when the group is trying to track down Lucifer’s soul but everyone, Johnny included, is getting stuck inside their own heads. Topaz looks around at the group and thinks “At this rate, Lucifer wouldn’t need to defeat them. They’d all end up huddled in a depressed pile on a random street corner.” Even typing that has me chuckling, imagining these heroes slumped in a dogpile on the street unable to go on because they’re depressed. Of course, they did go on, they’re heroes, but it brought some light to a very down moment in the book.

This book really needed that fun punch. Each of the characters, including Ghost Rider, deals with some pretty heavy personal demons. It could have gotten very depressing and difficult to read. But with some quippy lines and funny observations, the book manages to maintain a light atmosphere that makes it fun and easy to read.

Pretty much anyone can enjoy this book although I think people who love witches and powerful women will especially enjoy it. I know I absolutely did!

Witches Unleashed: A Marvel Untold Tales Novel by Carrie Harris is available now. Are you going to check it out? Let us know on Twitter or The Cosmic Circle Discord.

Book Review: Sound of Light: A School of X Novel