Uncanny Times: A Huntsmen Novel tells the story of sister and brother Rosemary and Aaron Harker. They have been trained since birth to hunt down and kill the uncanny. The uncanny are supernatural creatures of all different varieties. It’s basically the TV show Supernatural, set in 1913 and it’s great.

Uncanny Times is the first of a potential series by author Laura Anne Gilman and it comes out on October 18th. I have to say that I both greatly enjoyed this first installment and look forward to the future adventures of the Harkers.

[Note: While I am reviewing this novel independently and honestly, it should be noted that it has been provided to me by Saga Press for the purpose of this review. Warning: My review of Uncanny Times: A Huntsmen Novel contains some spoilers!]

Huntsmen track down uncanny that are causing problems for humans and eliminate them. It is an inherited job, passed from parents to children and huntsmen usually marry other huntsmen. This is because of how huntsmen came to be in the first place, and because of what makes them different from regular people.

You see, huntsmen are themselves a little uncanny. They are the descendants of unions between humans and fairies. As a result, they carry fey blood that allows them to sense and interact with the uncanny in ways that regular humans cannot. The huntsmen have created an entire network over the century to help support the hunters on their mission to protect humanity.

But some huntsmen (they are all called huntsmen, even women) leave the uncanny world behind and become civilians. Over the generations, they usually keep some contact with their active family members but they don’t actually fight the uncanny.

Such is the case with Dr. Lovelace, a distant cousin of Rosemary and Aaron. He had been aware of the uncanny and even helped their father a few times but he wasn’t a huntsman. But when he passes away his widow finds a note on his desk telling her to contact the Harkers. So begins the adventure in Uncanny Times.

Something’s not right in Uncanny Times: A Huntsmen Novel

Rosemary and Aaron, along with their dog Botheration, pack up and head to Brunson, in upstate New York, as soon as they receive the summons. Immediately upon arrival Rosemary senses something off about the town but can’t quite put her finger on what. Worse, the more they investigate the more questions they end up with.

It turns out there have been three attacks, not one, and they keep getting more vicious. Moreover, the facts around the attacks point in different directions and don’t conform to any known uncanny. However, they are most definitely not human attacks, that much the siblings are sure of. 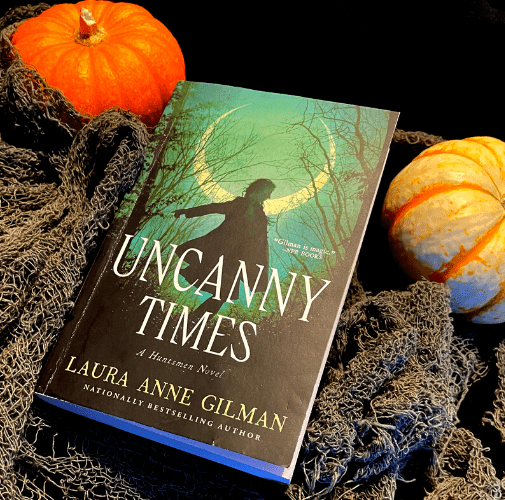 Then something even more astounding happens. The Harkers are approached by an uncanny who begs them to stop the attacks. This flies in the face of everything the Harkers have ever been told about the uncanny. The uncanny are supposed to be creatures, not beings. And even the few that are capable of speech are supposed to be, at best, ambivalent, and at worst, hostile, towards humans.

The siblings aren’t sure what to make of all these confusing circumstances but they keep investigating and working to uncover the truth behind the attacks. As they race to find the one responsible for the attacks Rosemary and Aaron are faced with difficult truths and realize they may not have all the facts surrounding the uncanny and their interactions with humans.

They face difficult decisions about who to trust and about what. Their choices will not only affect the town of Brunson but the whole world.

The relationship between Rosemary and Aaron is a bright point in Uncanny Times. They have the quintessential older sister and little brother dynamics, creating a lot of humor. They tease each other quite a bit and it adds tons of much-appreciated humor to the story. But they always have each other’s backs. Even if one of them is uncertain about a course of action they trust each other enough to try.

At times their relationship may seem a little too close. But siblings who have grown up in tight-knit families or with a lot of stress in their environments will recognize the level of care and closeness that breeds.

It’s nice how much Aaron supports Rosemary. She is a very capable and intelligent woman born into the wrong time and it chafes her something awful. Of course, she’s smart enough to see when stereotypes give her an edge and she uses it to her advantage. However, her brother really sees her and allows her to be herself. He isn’t afraid to admit when she is better at something and defer to her. It makes them a better team and it makes for a better story.

Fun with lore in Uncanny Times: A Huntsmen Novel

I’ve always been really into the supernatural and loved reading about different magical creatures so it was really fun to see the old tales woven into a new story. The idea that the children left behind by fairy dalliances would seek a sort of revenge by killing fey creatures is really interesting. Talk about parent issues!

Of course, by the time Rosemary and Aaron are born they are great-great-great-etc-parent issues but it’s the same sentiment. It was also interesting that, despite centuries of huntsmen collecting information about the uncanny, they still believe a lot of prejudices. Watching the Harkers realize these prejudices aren’t as true as they’ve been taught is nice.

I also loved that Gilman didn’t just use European creatures like a lot of authors tend to do. Seeing as how Uncanny Times is set in upstate New York the inclusion of local great lake tales and Native American lore was perfect. So often when writers place creature stories in America they import all the creatures from Europe so it was refreshing to have the uncanny actually be natives of the land.

Wishing for many happy returns

Gilman has a real hit here. The story was fun and interesting. She filled the world with enough details to make it really seem real. All the crumb trails she left enough will connect new stories in the series together. But the trails weren’t so large that they left holes in Uncanny Times. She was able to strike a perfect balance.

She also avoided one of my biggest pet peeves with series books: She wrote a complete tale in the first book. I really hate when authors write incomplete stories that have no sense of conclusion just to try and force readers into buying more books. I always say, write a good enough story the first time and I’ll buy the next book anyway instead of leaving me hanging. Gilman does this.

Uncanny Times is a full and complete adventure with a nice lead into continuing adventures. If you never read book two of the series you’ll still feel complete and satisfied with Uncanny Times and where the Harkers end up. I fully recommend Uncanny Times to anyone who likes mysteries, period pieces, supernatural creatures, or just good stories.

Uncanny Times: A Huntsmen Novel will be available on October 18th, 2022 from Sage Press an imprint of Simon and Schuster. Have you read the novel? Are you excited to check it out? Let us know on social media. If you haven’t already, check out my other latest review, Such Sharp Teeth!