Book Review: ‘The Tower of Nerek: A Descent: Legends of the Dark Novel’ by David Guymer Book Review: ‘The Tower of Nerek: A Descent: Legends of the Dark Novel’ by David Guymer

Welcome to another book series based on the world of a role-playing game from Aconyte. This time David Guymer brings the world of Descent: Legends of the Dark to life in The Tower of Nerek. In a world of magic and danger, three warriors have banded together to try and destroy the greatest threat they see to Terrinoth, even if they’re not sure what it is.

[Note: While I am reviewing this novel independently and honestly, it should be noted that it has been provided to me by Aconyte for the purpose of this review. Warning: My review of The Tower of Nerek contains some spoilers!]

The world of Terrinoth

Terrinoth is a world torn apart. There are demon-tainted raiders, undead warriors, and powerful sorcerers that aren’t always good. There are multiple kings and lords that divide the land of Terrinoth. They’re too busy fighting one another to band together and face these threats together. Their squabbling only makes these dangers grow stronger.

That leaves independent roaming warriors to protect the people and the lands from these threats. These warriors come together in bands to improve their chances of success against enemies. Some of the warriors come from rich families and can fund their own escapades. Others must rely on the gratitude and generosity of the people they save. Both types of warriors are important and protect the inhabitants of Terrinoth as they roam the country.

A leader without an identity

Andira Runehand has no idea who she really is. She remembers waking up with a powerful rune embedded in her hand and no memories in her head. Since then she has been traveling Terrinoth following a “pull” while fighting demonic evil. Her two current companions, Trenloe the Strong (a kind but stupid knight) and Owl (another amnesiac), don’t know anything more than she does about their mission but they are completely committed to Andira and will follow her anywhere. 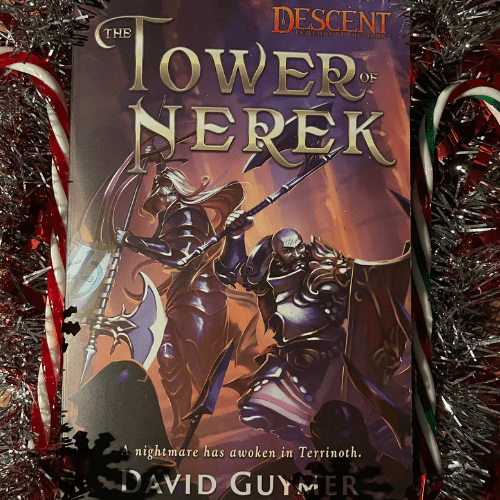 At the start of The Tower of Nerek, the latter two followed her to Nerekhall. She isn’t sure why she’s here but she hopes someone at the Academy, a magic school, will be able to help her. Luckily, Trenloe has a contact at the school, a gnomish sorceress named Ravaella, but she is a little… quirky, and Andira isn’t sure that she’s the right kind of help.

A city of fear and the tower of Nerek

Complicating matters, Trenloe the strong got himself arrested within hours of entering the city. He was chasing down a pickpocket when one of the Ironbound, an enchanted iron police force, started to attack her with deadly force. She was only a child and didn’t deserve to die so Trenloe attacked the Ironbound.

This is a huge no-no, obviously, so he was eventually subdued and taken to the tower of Nerek. The tower is an ancient ruin that was created with dark magic long ago. Its original owner is long gone and it has been converted into a prison for the town of Nerekhall.

The fearsome prison and the Ironbound who keep “peace” hold the town in an awful thrall. While everything seems wonderful on the surface, that is only because people are afraid to create any waves. Anyone who causes problems is attacked by the Ironbound and sent to the tower. Not all return. Even looking at the tower is a crime. But under the surface of law-abiding perfection, a criminal underground is alive and well.

It’s all connected in this Descent: Legends of the Dark novel

After Andira and Owl free Trenloe from prison, they try to plan their next move. It turns out the Ironbound’s odd behavior towards the young pick-pocket is not a singular event. The warriors realize that the Ironbound, the tower, and Andira’s draw to Nerekhall are all connected. They just don’t know how.

As they race to find out what evil is at work in Nerekhall, a shadowy conspiracy is revealed to the readers. Someone wants to unleash an evil that hasn’t been seen in Terrinoth in centuries. Can Andira and her companions discover what is planned and who is planning it in time, or will darkness again cover Terrinoth?

An okay but not necessary read

The Tower of Nerek has all the makings of a great novel. There’s magic, mystery, excitement, and fight scenes. But for some reason, it just didn’t come together. Andira Runehand just didn’t feel very likable. Honestly, the bad guy was more fun and interesting but they weren’t an antihero so that didn’t redeem things. Most of the characters were just kinda boring and flat.

Even though the story was okay, without the good characters to anchor it I wasn’t really invested. The ending was very exciting and Andira does go through some great personal growth but it still didn’t do it for me.

So I wasn’t impressed with this latest offering to the Descent: Legends of the Dark series. If you’re a fan of the game you might appreciate it more. It wasn’t the worst thing I’ve ever read so if you are into the magical warrior motif you’ll probably like it. There were also tons of important female characters, so if you want some female representation then that will scratch your itch. If this isn’t an area of the fantasy genre that you really love, you’ll probably want to skip this installment.

The Tower of Nerek: A Descent: Legends of the Dark Novel is available now. Planning on reading it? Let us know on Twitter or The Cosmic Circus Discord. And if you haven’t already, check out our review of another book from Aconyte, Lair of the Crystal Fang!

Book Review: Lair of the Crystal Fang by S.A. Sidor