Book Review: ‘The Subtle Knife: A His Dark Materials Novel’ by Philip Pullman Book Review: ‘The Subtle Knife: A His Dark Materials Novel’ by Philip Pullman

[Warning: Spoilers from The Subtle Knife by Phillip Pullman are below!]

A new relatable hero in The Subtle Knife

In The Subtle Knife, we meet Will. He’s a young kid from our world (or a world very like ours) who has had to grow up very fast. His father disappeared when he was little and his mother suffers from some kind of mental illness (it’s never named but from the symptoms, it’s most likely schizophrenia). Will has learned to care for himself and his mother. They’re not great but they’re getting by.

Then strange men show up asking about his father. They attack Will and his mother and in the scuffle one of the men ends up dead. Scared, Will leaves his mother with a neighbor and goes on the run. As he’s looking for a place to hide he stumbles across a patch of air that looks different from the air around it. He realizes it’s a kind of doorway so he passes through and leaves his world behind.

A dangerous world and a new friend

After passing through the portal, Will finds himself in the city of Cittàgazze, a seemingly empty city. But there is life there. He meets Lyra and Pan (her daemon), who has also found herself in Cittàgazze after leaving her world. Their alliance is uneasy at first. Lyra uses the alethiometer (golden compass) to learn that Will is a murderer and for some reason, this convinces her that he is a trustworthy companion. But Will’s life has taught him to be mistrustful of others and he is uncertain of Lyra at first. But Lyra’s unswerving loyalty as the two battle spectors (creatures that feed on the dust that surrounds adults but not children), desperate orphans, greedy adults, and the faceless “them” hunting Will and his missing father, bonds the children tighter than superglue.

As they struggle to find safety in a dangerous world they come across a monk with a knife like nothing they have ever seen before. A fight ensues and Will loses part of two fingers in the battle. The knife cuts them off like a hot knife going through butter. The monk stops battling at this point, the injury is a sign that the knife has chosen a new bearer. He teaches Will about the special magic of the knife. It is made of special material and is so sharp that it can cut the material between worlds, creating doorways like the one that Will passed through into Cittàgazze. He also teaches Will to close these doorways again before they part and tells him that he must always close a door behind himself.

As Lyra and Will grow closer, a much bigger plot is going on outside them. If Pullman made the church an enemy in The Golden Compass, he really villainizes it in The Subtle Knife. Indeed, while The Golden Compass was largely about Lyra with a hint at a larger conspiracy, The Subtle Knife dives right into this conspiracy. Pullman comes at these secret plots from several different angles. 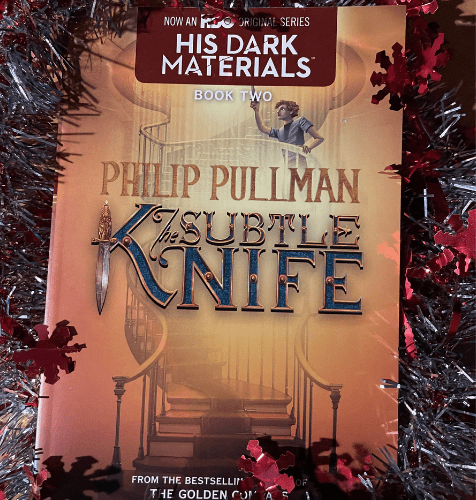 One is Mary Malone, a scientist from Will’s world who is studying dark matter. Lyra is led to her and realizes that dark matter and Dust are the same thing. Lyra helps Mary to find a way to communicate with this mysterious force. The Dust tells Mary that she needs to travel beyond her world, just like Lyra and Will, so that she can play an important role when the time is right. In The Golden Compass, we learned that the witches had a secret name for Lyra, Eve. Now Mary is told that she is to be the serpent.

Another player is the church, and its main avatar is Mrs. Coulter. The church is obsessed with Dust and its possible connection to original sin. This connection seems to be connected to daemons as well. The church and Mrs. Coulter want to make sure that Lyra turns away from sin and breaks this human-Dust connection when the time comes.

A third player is Lord Asriel. He thinks that dust is a good thing and that the church is wrong. In fact, he thinks Heaven above is wrong and he is trying to mount a rebellion against God himself. Lord Asriel is gathering fighters from across all the different universes but he needs one thing, the subtle knife and the person who can wield it.

A choice is coming for Will and Lyra and there are vested interests on both sides that are doing all they can to make sure the “right” choice is made, depending on their desires. One interesting part of the prophecy is that Lyra must make her choice without knowing how important that choice is. If she learns of her own importance then everything is lost. This means that the shadowy figures moving all around her have to continue the war that is centered around her ultimate unknown choice without ever interfering with what she is doing.

In The Subtle Knife and even more in The Amber Spyglass Pullman sets up two different stories that greatly impact one another but don’t really touch until the very end. One story follows Lyra and Will as they hop between worlds. These children have their own ideas about what is important and what they need to be doing and they are the stubbornest children I have ever met. The second story follows Lord Asriel’s rebellion and the church’s attempt to squash it and all other resistance.

Both stories are fascinating. What is maybe most amazing is that Pullman has the audacity to talk to children about things like free will, the soul, and control. Many people think that children can’t handle such topics but I disagree. Children absolutely think about these things and if we don’t give them the words to express these thoughts or the structures to explore them we’re doing them a great disservice. Putting these big concepts into an action-packed adventure gives kids a way to start thinking about these things.

A solid middle novel in the His Dark Materials trilogy

The Subtle Knife continues and enriches Lyra’s story. Will is a wonderful contrast to Lyra. Lyra is all wild-ness and energy, quick to trust, and emotional. Will is solid and steady. He is slow to open up but once he’s committed to someone he’s in all the way. I always saw them as air and earth. Both are impressive in their own ways and they complement each other’s strengths and weaknesses, making a powerful team. If you’ve read Philip Pullman’s The Golden Compass then you have to read The Subtle Knife before finishing up Lyra’s story in The Amber Spyglass.

The Subtle Knife by Phillip Pullman is available now! Do you plan on reading it? Let us know over on Twitter or The Cosmic Circus Discord. And if you haven’t already, check out our review on the first novel in the His Dark Materials trilogy of novels!