“As you wish.” Aaahhh. Has there ever been a more romantic phrase? Well, there may be a few that are on par but Westley’s (Cary Elwes) simple declaration sums it all up so sweetly. Now, using the all-new The Princess Bride: The Official Cookbook by Jenn Fujikawa you can say these sweet words to your beloved after they pick a recipe to try. From Farm Boy Breakfast to Good Night, Westley this book covers all different types of recipes. Even the dread pirate Roberts will be pleased after munching some of these culinary offerings.

[Note: While I am reviewing this novel independently and honestly, it should be noted that it has been provided to me by Smartpop for the purpose of this review. Warning: My review of The Princess Bride: The Official Cookbook contains some spoilers! But no spoiled food!]

A wide variety of recipes

The Princess Bride: The Official Cookbook by Jenn Fujikawa contains recipes to get you through the entire day. Get your day started with Enchanting Breakfasts, stay fueled up with Gallant Lunches, and end your day with Adventurous Dinners. For in-between meals, there are some Swashbuckling Snacks. And the evening can be capped off with Valiant Desserts and Triumphant Drinks. Momentous Soirees finishes the book off by grouping together recipes to make your party planning easy.

The recipes run the gamut from easy (finger sandwiches and potato chip nachos) to difficult (paella and brandy snaps). While there is no difficulty rating on the recipes, they all come labeled with GF (gluten-free), V (vegetarian), or V+ (vegan), where applicable. These labels are included in the table of contents and the individual recipe, which makes looking up recipes for these particular diets much easier.

A full serving of nostalgia in The Princess Bride: The Official Cookbook

The Princess Bride movie wasn’t a food-filled affair. So of course Jenn Fujikawa takes some creative license in this cookbook. Most of the recipes are for dishes that aren’t themselves connected to the movie. But a little bit of clever wordplay ties them in and will make fans smile. Names like Bread Pirates Roberts (bread pudding), and Have You the Wing? (Chicken wings) left me giggling even if Westley (Elwes) and Buttercup (Robin Wright) never ingested them.

Funnily enough, before I got the book I said “there better not be any recipes for R.O.U.S.es in there or I’m out”. When I got it and flipped through, I burst out laughing at page 56. But Fujikawa’s Rolls of Unusual Size, stuffed with ham and cheese and decorated to look like rats, are so cute, and couldn’t even be mad, I just had to make them (who would have thought that R.O.U.S.es would taste so good?). 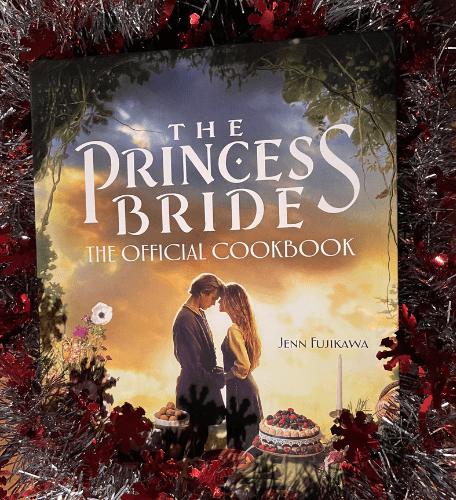 Beyond the quippy recipe names, the book contains stills from the movie along with dialog to tie each recipe in. It was fun just to flip through and read the lines that I’ve enjoyed so much through the years. It was an instant mood lifter, even without the food.

There were also the “oh my God, they look so young!” thoughts as I looked at the stills. But seeing as how The Princess Bride came out (brace yourself) 35 years ago, that thought is unavoidable. There were pictures of the food as well but I was a little surprised because not every recipe had a food picture. Some only had movie shots. Considering it was a cookbook, that surprised me. I would have liked knowing what the food was supposed to look like for every recipe even more than I wanted to see Cary Elwes.

I have perused plenty of cookbooks for inspiration before a special meal. It can be challenging as you flip through dish after dish, to try and pull a cohesive meal together. But Jenn Fujikawa has solved that problem! She includes a section called Momentous Soirees. In this section Fujikawa groups together different recipes into groupings that work well from casual buffets to fancy multi-course meals. She even includes drink choices to impress your guests. It was something I’d never seen before but really liked.

In our alcohol-obsessed culture, we nondrinkers can feel a little left out. But Fujikawa does include a few drinks that don’t call for alcohol. I was happy to see this. Don’t get me wrong, she’s included plenty of tipsy drinks for those who want to imbibe. But at least if someone wants to stay sober “As you wish”.

One of the drinks sounds so decadent it can almost be a dessert! The Good Night, Westley is a hot chocolate cocoa. Or a cocoa hot chocolate, whichever sounds better. The point is it has both cocoa powder and melted chocolate mixed with the milk. The defining difference between cocoa and hot chocolate respectively is whether cocoa powder or melted chocolate is used to flavor the milk. This uses both and is topped with decadent whipped cream for a drink that is as much a dessert as it is a beverage. It is my favorite recipe in the book!

A great gift for fans of The Princess Bride

Most of us who grew up in the eighties and nineties have seen The Princess Bride more than once, or twice, or…let’s just say most of us are well acquainted with Fujikawa’s source of inspiration. A smaller subset of people are truly obsessed with Westley and Buttercup’s trials. This book is really aimed at that subset.

Will you enjoy the book if you’re not part of that subset? Sure. I don’t consider myself one of the die-hard fans and I still loved looking through it. I’ll even make some of the recipes. But will I consistently pull it down to leaf through it for inspiration? Probably not. Furthermore, the food is going to taste great even if you’ve never seen The Princess Bride. Of course, you’ll miss out on the whole point of the book if you’ve never seen the movie.

But fans will devour both the book and the food. It will make a great gift for any The Princess Bride foodies out there this holiday season. Possibly better, use the Momentous Soirees section to plan out an entire special day for them and when they ask for seconds’ say “As you wish”.

The Princess Bride: The Official Cookbook is available now. Are you planning on checking it out? Let us know on Twitter or in The Cosmic Circus’ Discord! And if you haven’t already, check out our review of another fantastic cookbook, The Star Trek Cookbook.