Book Review: ‘The Amber Spyglass: A His Dark Materials Novel’ by Philip Pullman Book Review: ‘The Amber Spyglass: A His Dark Materials Novel’ by Philip Pullman

The Amber Spyglass is the thrilling conclusion to Philip Pullman’s His Dark Materials series. Our young heroes, Lyra and Will, have been separated and need to find each other. Once they do it’s a grueling trip to literal Hell and back for them. Elsewhere mortals and angels fight Heaven for true free will.

[Warning: Spoilers from The Amber Spyglass are below! This may include some major spoilers for His Dark Materials season 3 which is currently airing on HBO!]

Children will still enjoy the story, but I think the bigger concepts are aimed more at adults. Children will absorb them at a more subconscious level perhaps, but adults will really think about life, death, free will, and sin and question the established thinking on these concepts.

A daring rescue in The Amber Spyglass

At the end of The Subtle Knife, Lyra goes missing. At the beginning of The Amber Spyglass, we learn that Mrs. Coulter has kidnapped her. She does this because the Magisterium (the church) has learned that Lyra is destined to become the new Eve. They decide that the only way to save humanity from a second fall is to kill Lyra. But Mrs. Coulter is Lyra’s mother and as awful as she is, she doesn’t want her daughter to die. So she hides her away in a cave, keeping her drugged so she can’t try to escape.

While Lyra is drugged her soul travels to the land of the dead and finds her friend Roger. Lyra feels responsible for his death and when she learns how horrible the world of the dead is, she promises him she’ll find a way to free him from the terrible place.

While she’s asleep Will teams up with two angels to try and save her. The angels want Will to join Lord Asriel and are following him until he does. The angels tell Will that God or “the authority” is actually just the first angel. Further, the authority didn’t create anything. He condensed out of the Dust that everyone is so worried about. Turns out the Dust is created by sentient beings as they mature and is a kind of physical manifestation of consciousness that is itself conscious. Confusing, I know.

So with the angels tagging along, Will uses the knife to rescue Lyra. But as they’re escaping Will thinks of his mother. Her memory scatters his focus and the subtle knife shatters. Will gathers the pieces but has no idea how to fix the knife. Luckily, when Lyra awakes she knows exactly who can help them, Iorek, the armored bear.

An arduous repair and an exacting promise

Iorek is able to help them but the task demands a lot from Will. Besides being physically draining, he has to release his connection to his mother. The entire process is a metaphor for how children have to distance themselves from their parents as they grow up to become who they’re meant to be. And to make room for new relationships as they grow and change. 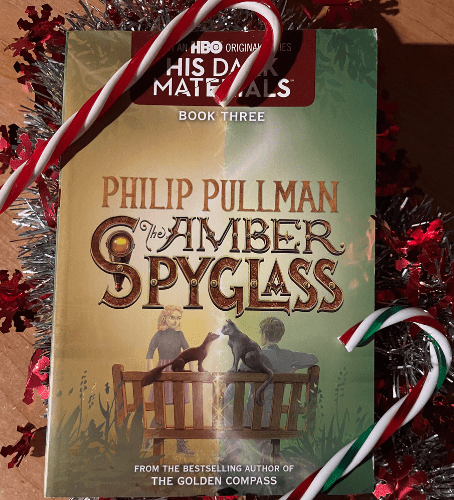 After the knife is fixed Lyra tells Will about her promise to free Roger from the land of the dead. He agrees to go with her and the angels have no choice but to follow them. They are also joined by two Gallivespian spies. The tiny spies work for Lord Asriel and are trying to force Will to join him, the same as the angels. Together the strange group heads to the mysterious land of the dead.

The horrible hopelessness they find in the land of the dead leads Lyra to strike a deal with the harpies that control the world and torment the dead. If they can find a place for Will to cut a doorway out of the hellscape, the harpies will lead the dead souls out.

In exchange, the dead must share the true story of their lives (babies are given an exception) with the harpies. Once the souls leave the underworld they dissolve into the universe and go on to become part of something new, their stories continuing.

The trip takes more out of the children than they ever imagined. You see, daemons cannot enter the land of the dead so Lyra has to leave Pan behind when she goes to rescue Roger. The separation is both physically and emotionally brutal. She promises that she’ll find him again but at the time she has no idea when or how they’ll meet again.

Lyra knows what is happening when she leaves Pan behind, but Will doesn’t get off any easier. It turns out that all humans have daemons, even if they come from a world where they don’t see them. So Will has to leave behind a part of his soul on the docks as they cross into the underworld too. It is just as physically painful for him as it is for Lyra to have that piece of this soul torn away, but the emotional shock he felt was different. After all, he didn’t even know he had that piece to lose.

A different kind of journey in The Amber Spyglass

While Lyra and Will are working to free the dead, Mary Malone is moving farther and farther from everything she knows. After passing into the city of Cittàgazze, Mary moves on to another world. In this world, the sentient species, the Mulefa, is a kind of elephant that has evolved to use giant seed pods as wheels to get around. Mary learns to live with these beings and they teach her what they know of Dust.

But there is a problem in the world of the Mulefa. They have a much closer connection and a better understanding of Dust (which they call Shadows) than other worlds seem to have. They even have the ability to see the Shadows with their own eyes.  And they’ve noticed that the Shadows seem to be disappearing from the world.

Mary creates the amber spyglass that allows her to see the Shadows as well. As she observes the world with her spyglass she too sees that the Shadows, or Dust, is draining away, but where to and why eludes her. She also realizes that as the Dust is leaving, it is slowly killing the world.

The most important journey

After Lyra and Will leave the world of the dead, they end up in the Mulefa’s world and meet up with Mary. Their daemons end up there as well, but they hide from the children.

Now comes perhaps the most pivotal part of the story. Lyra is Eve and Mary is the Serpent. When they come together Mary shares the story of her life and choices and it opens Lyra’s mind and body to adulthood. Mary doesn’t really tempt Lyra to do anything the way the classic serpent is depicted. Instead, she shares a tale of choices made and lets Lyra see that she too can make her own choices. I think Pullman is making the case that “original sin” is not sex or disobedience but free will and love.

After hearing Mary’s story the children go off on their own and confess their love for each other. They reunite with their daemons and share a very intimate experience as they touch each other’s daemons, something that is completely taboo in Lyra’s world. The experience is the second “fall” that the Magisterium was so afraid of. But instead of dooming the world, it saves it.

Eventually, some angels find Will and Lyra. Lord Asriel’s war is over and the world is being put back together. The importance of Dust is being acknowledged and the angels know how it is being lost. It turns out that when the knife cuts between worlds there are accidental consequences.

One is the creation of spectors. The other is wounds in the universe that Dust leaks out through. The angels ask Will to teach them how to close these windows so that the Dust will stop leaking away and the universe can heal itself. The quantity of Dust is not a set amount in the universe. Sentient beings create Dust. So once the windows are closed the supply will eventually replenish and the universe will be healed.

This leaves an impossible choice for Will and Lyra. One of them can choose to live in the other’s world, but they will sicken and die within a few years, or they can leave a window open between the two worlds and travel back and forth, or they can say goodbye forever. At first, the window option seems like a perfect solution. The angels tell them that enough dust is created by sentient beings that one window could be left open. But then Lyra remembers the dead. They cannot leave the dead trapped forever underground with no hope. So they realize that they have to say goodbye.

After everything Will and Lyra have been through, they are no longer children. Once they make the mature choice to separate they begin their goodbyes. Mary also prepares to leave the Mulefa and return home with Will.

In perhaps one of the most heartrending shows of love, Lyra finds a bench in an Oxford garden that exists in both of their worlds. They vow to sit on the bench every midsummer’s day so that they can still be close. The book closes with Will as a grown man doing just that and me dissolving into a puddle of tears every time.

His Dark Materials is an amazing journey

From Lyra’s wild beginning in The Golden Compass to her mature sacrifices in The Amber Spyglass, His Dark Materials is an incredible journey. Lyra’s journey isn’t just through space or time, but through life as well. She grows from an unruly, selfish child into a thoughtful and compassionate adult, even if her age is still young. Her journey also gives readers a lot to think about.

While a lot of different concepts are explored, I think the biggest takeaway is that original sin isn’t a sin at all. Instead, Pullman’s Magisterium took the normal experiences of growing up and making choices and villainized them to increase their own power.

I think the role of fear can’t be downplayed either. It is the fear of what others might choose that drives the desire for control as much as anything. These are very heady concepts for a book marketed to children but I think that by introducing these topics to kids we give them a lot of time to think about them and come to their own conclusions. Besides, just because a book is marketed as a “child’s” book doesn’t mean that adults can’t read, enjoy, and learn from it too.

Overall, I think everyone could benefit from reading Philip Pullman’s His Dark Materials series. And I hope people do more than just read it. People should talk about the concepts within it too. Let’s all work to create more Dust in our own world!

The Amber Spyglass by Phillip Pullman is available now! Do you plan on reading it? Let us know over on Twitter or The Cosmic Circus Discord. And if you haven’t already, check out our review on the second novel in the His Dark Materials trilogy of novels!

Book Review: The Subtle Knife: A His Dark Materials Novel