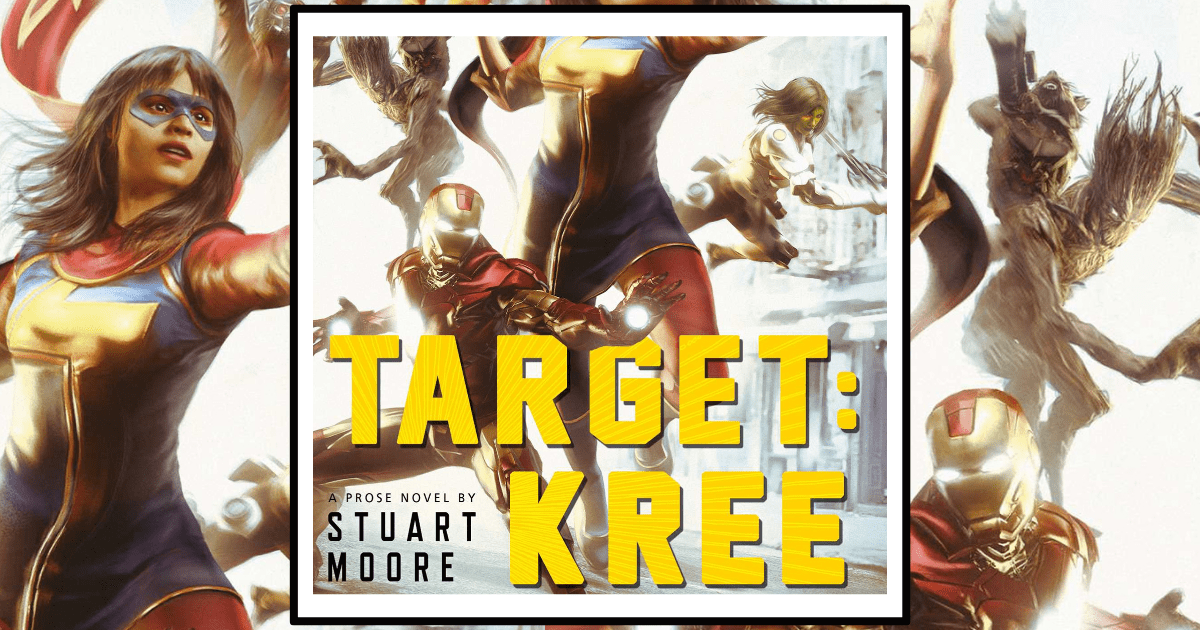 Target: Kree by Stuart Moore is the first of the three-part series Crisis Protocol from Aconyte Books. I accidentally read the second book, Shadow Avengers by Carrie Harris first and that set my expectations of Target: Kree pretty high. This may have affected my opinion of Target: Kree somewhat.

[Note: While I am reviewing this novel independently and honestly, it should be noted that it has been provided to me by Aconyte Books for the purpose of this review. Warning: My review of Stuart Moore’s Target: Kree A Crisis Protocol Novel contains some spoilers!]

A terrible tragedy in Target: Kree A Crisis Protocol Novel

The adventure begins on the planet Praeterus, which is in the process of exploding! Praeterus is an outpost of the Kree empire but the empire clearly doesn’t care about them. As their world is literally ending, the people of Praeterus, numbering over 80,000, have only three janky ships that are capable of holding a few hundred people to evacuate with. The empire sends no assistance of any kind.

The only ones trying to help the Kree outcasts are the Guardians of the Galaxy crew. The Guardians load as many people as possible onto the escape ships while simultaneously trying to discover the cause of the planet’s meltdown and stop it. Gamora does manage to find the root of the problem and it’s a person, but she cannot stop them from destroying the planet. Gamora is nearly killed in the world-ending explosion and the Guardians believe that Drax is lost as well.

The Kree refugees are abandoned by their larger empire but eventually find a home on Earth. Tony Stark, Iron Man himself, offers them work and homes and they accept. But this offer isn’t exactly what it seems. The Kree are treated horribly, forced to live and work in inhumane conditions.

She-Hulk agrees to represent the Kree against Tony Stark. But when she and Ms. Marvel bring the Krees’ situation to his attention; he claims ignorance. Before they can try to figure out what’s going on they’re interrupted by explosions and fighting outside. The Guardians have arrived to exact revenge for the death of Drax. They’re convinced that the person responsible for the death of Praeterus and by extension Drax is among the refugees and they’re in a shoot-first, ask questions later mood.

A big mess in Target: Kree

This is where the story fell apart for me. The vast majority of the story was about the Guardians fighting the Avengers because the Guardians refused to stop attacking people long enough to find out what was going on. I really didn’t care for the whole good guys on good guys battle.

The Avengers try to get the Guardians to listen to reason but they just keep fighting. The most infuriating part is that the Guardians know the Avengers are heroes and that they would help them get to the bottom of things if they just stopped and talked.

After a very long fight that caused all kinds of damage and nearly killed innocent Kree, the Guardians finally explain why they’re attacking the Kree. The Avengers agree to help track down the planet killer and Tony decides to find out how and why the Kree have been treated so horribly in his name.

At this point, the heroes split into separate groups to try and tackle all the different problems at once. Unfortunately, they are not great at working together so things go less than smoothly. Tony manages to fall under the control of an unknown villain and he’s not the only one. A few other Avengers are also being controlled by this unknown entity. Cue the good guy on good guy battle, again.

This time I was less annoyed by the Avenger Vs. Avenger melee because it wasn’t caused by thick-headedness. Yes, the good guys are still fighting like brothers trying to get the last cookie when mom is gone, but this time there’s a reason.

Things go from bad to worse for our heroes when Hulk comes to help, and is transformed into The World-Breaker. It looks bad at this point, our heroes are already in rough shape and now this almost unbeatable foe appears. Just when it seems like everything is lost, help comes from the most unlikely source and things work out, sort of.

A hard landing and final thoughts on Target: Kree

In the end, our heroes prevail. The evil seems to be vanquished, the Kree are saved from their horrendous conditions, and the Guardians leave without causing any lasting damage. Things are not great, but they’re getting better. Then Ms. Marvel runs into Spider-Man and is recruited to the Shadow Avengers. With the final word of the book, we finally learn the name of the true villain behind the death of Praeterus and the superhero free-for-all on Earth.

It was really hard for me to wait until the end to finally have the big baddie be revealed because I had already read Shadow Avengers and knew who it was going to be. I felt annoyed waiting and waiting for him to appear.

The sloppiness and aggression of the Guardians really bothered me too. No one is perfect but heroes should be held to a higher standard. Heroes should aspire to do better, not beat up a bunch of innocent people because they’re mad.

Target: Kree – A Crisis Protocol Novel by Stuart Morre and Aconyte Books is currently available at most other booksellers.

Have you read Target: Kree? What did you think of the novel? Let us know in the comments or over on Twitter! If you haven’t already, check out my review from the second novel in Aconyte’s Marvel Crisis Protocol series, Shadow Avengers by Carrie Harris!