What difference can one little squirrel (girl) make in the universe? Turns out it’s quite a big one in Squirrel Girl Universe by Tristan Palmgren. The titular heroine is joined by a whole pack of friends in a quirky adventure on the far side of the galaxy.

Squirrel Girl faces gigantic problems down with a wholesomeness not often seen in heroes. Palmgren also includes some big scientific concepts but don’t let either of those deter you, there’s plenty of humor and soft-ball explanations to keep this book appealing to everyone.

[Note: While I am reviewing this novel independently and honestly, it should be noted that it has been provided to me by Aconyte for the purpose of this review. Warning: My review of Squirrel Girl Universe contains some spoilers!]

I have heard of Squirrel Girl before this book (she appears in my four-year-old’s lift-the-flap Marvel book) but didn’t really know anything about her. Turns out she has the powers of a squirrel (surprise!) but don’t laugh. Turns out those little critters have a lot of special powers hiding under their fluffy fur.

In addition to super strength and speed, she’s almost invulnerable and has amazing balance and awareness of her body, and tail. Yes, she has a big, bushy squirrel tail. She has enhanced hearing and instincts like a squirrel too. She’s also pretty smart and extremely cheerful and energetic, although that might just be the Doreen Green and not the squirrel. Oh yeah, and she can talk to squirrels!

Now I had heard of Squirrel Girl but I had never heard of her eclectic group of friends, both super and otherwise, who join her in this tale. Chipmunk Hunk has the powers of a chipmunk and is ridiculously handsome. Koi Boi can communicate with sea creatures and is made for water. Then there is Brain Drain, a brain and set of eyeballs floating in a glass jar atop a robot body.

This interesting collection of heroes is joined by Mary, a mad scientist type, and Nancy, the most loyal friend in the universe. 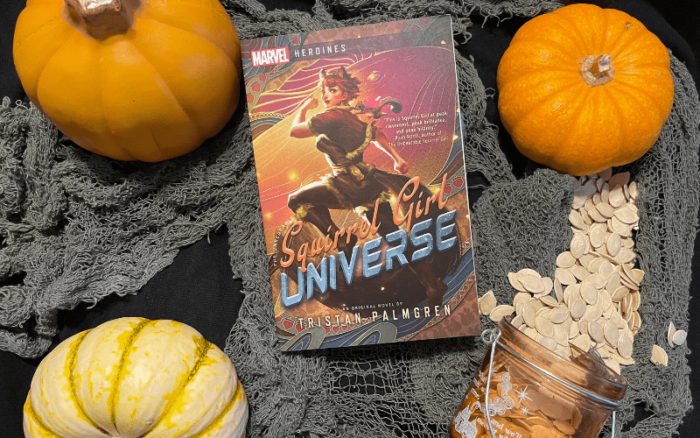 The whole bunch is very optimistic and kind. They are definitely the junior heroes though. On Earth, they seemed to mostly stick to helping their local neighborhoods, although there were hints of much bigger adventures that they inevitably got sucked into, much like this one. Their upbeat personalities helped get them through some situations that seemed just too big for them. They gave off serious goody-two-shoes vibes (“darn was too intense a swear word and got called out) but it was endearing instead of annoying.

Facing off against Squirrel Girl is the Mad Thinker. He can calculate the probability of anything to the point where he always knows exactly what’s going to happen. This seems to have caused him to become incredibly bored and disaffected. He decides the best way to fix this is to move the entire city of New York to a distant galaxy and become its ruler.

Of course, Squirrel  Girl and her friends have a problem with this and try to stop him. In the process, Squirrel Girl manages to surprise the Mad Thinker (not for the last time) and disrupt his plans. The end result is that Squirrel Girl, her whole crew, and the Mad Thinker get transported to the far side of the universe with resources, no communication with home, and no way back.

But the Mad Thinker is one of the most annoying villains I’ve ever encountered. He was extremely good (but not perfect) at predicting actions and outcomes. But he mostly just acted like a bored child instead of being truly evil. He was very busy calculating outcomes but he didn’t look past those outcomes, like what will he do when he wins? And because he could so accurately guess what people would do, he thinks of people as robots more than machines.

Like most villains, he didn’t care about collateral damage, but he had more of a “didn’t think of it” feeling than a “don’t care” one. I really didn’t like him because he just was so immature in the way he approached everything. Don’t get me wrong, he was perfect for the book and for the whole vibe of Squirrel Girl and her crew. But he was more annoying than scary.

At first, Squirrel Girl and her friends are laser-focused on trying to get back home but they very quickly get caught up in a brewing intergalactic war. Now they could just ignore the war and head home but as one alien put it humans always think they are the center of everything and can’t stop meddling in affairs that have nothing to do with them.

The alien is angry about it but Squirrel Girl can’t imagine not meddling. So she meddles, and it leads to a whole host of problems. Will this small group of friends be able to save the entire universe by themselves? Everyone else writes them off, but Squirrel Girl is the Unbeatable Squirrel Girl and she doesn’t give up that easily.

Squirrel Girl Universe has a very light-hearted, upbeat feel to it. The writing style is very conversational and easy to read. Even the heavy scientific concepts are shared in a way that makes them surprisingly easy to understand. I enjoyed the book a lot but I think the real target audience is probably the younger crowd. Middle school to high school-age kids will go nuts for Squirrel Girl. It is a perfect entry book for the Marvel novels.

Now that’s not to say that adults won’t enjoy the book. I did. I was literally laughing out loud at some parts. It’s a great escapist book to just relax with and it was a really quick read. But it might be a little too sweet for some readers who want more grit with their heroes. I would still suggest giving Squirrel Girl a chance though, it’s nice to laugh!

Squirrel Girl Universe: A Marvel Heroine Novel by Tristan Palmgren is available now from Aconyte Books. Have you read the novel? What are your thoughts on it? Let us know on social media. If you haven’t already, check out my other latest review, Sisters in Sorcery: A Marvel Untold Novel!