Harry Potter and the Sorcerer’s Stone (Philosopher’s Stone to the Non-USA world) hit shelves in 1998 and when I say “hit” I mean “BOOOOOM!!!”. That simple little book about an orphan boy looking for a place to call home set off a chain of events that no one could have foreseen, I mean, maybe Professor Trelawney but no one would have believed her. The Harry Potter series is credited with single-handedly saving the young adult book scene. And the Harry Potter film franchise brought the fantastical wizarding world to life for millions, if not billions of people. The Wizarding World of Harry Potter has grown so large that it can be seriously overwhelming for anyone to try to keep track of. Smart Pop Explains: Harry Potter Books and Movies (unauthorized) attempts to help by offering answers to all kinds of questions that might well, pop up, about this sprawling collection.

[Note: While I am reviewing this novel independently and honestly, it should be noted that it has been provided to me by Smart Pop for the purpose of this review.]

A source blend that doesn’t quite work

I’m going to state a couple of things right now, first, I am a big Harry Potter fan, like a HUGE Harry Potter fan. I found the book (okay, my mother found the book, she is very proud of this) at a discount store before Harry Potter had become a thing, brought it home, and I fell in love. I have first editions of every book and my Harry Potter and the Goblet of Fire contains the coveted priori incantatem mistake (which I caught as I read the first time).

The movies are also enjoyable but (second thing) I am first and foremost a source material person. Whenever there is a difference between a book and a movie, I feel whatever came first should be the definitive “correct” answer. Since the Harry Potter books came first, their version of “reality” should be looked at as the true version. 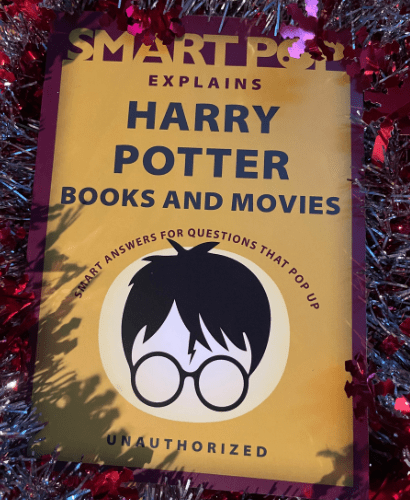 Okay, now to how this relates to Smart Pop Explains Harry Potter Books and Movies. Smart Pop tries to look at the two worlds simultaneously and tries to hold them both as true. Then the book makes definitive statements like “Dumbledore took the position of Defense Against the Dark Arts teacher”. This is how it is presented in the Fantastic Beasts series (it was trying to cover a timeline mistake with Professor McGonagall). But both the books and the Harry Potter movies have Dumbledore as the transfiguration teacher. If they are going to make statements like that they should have mentioned which material presented that information and also given the alternative information.

Smart Pop Explains: Harry Potter Books and Movies presents itself as a book that will “explain it all to you in a way that nothing or anybody’s ever done before.” But I’ve had plenty of arguments with people about facts in Harry Potter that they’ve been wrong on. Even throwing out the discrepancies based on book-movie differences, there were a fair amount of mistakes in this book. I stopped counting after ten in the first fifty pages because that was just way too many for me. I honestly expect that most people wouldn’t have caught all the mistakes I noticed. But I did catch them and it really bothered me because you cannot claim to be giving “smart answers for questions that pop up” if the answers are wrong.

While I wasn’t impressed with the writers’ research chops or fact-checking abilities, the book is not without any merit. It does give a general overview of the wizarding world and it contains a bunch of charts and lists that make some information easy to access. The Value of Money gives a nice breakdown of the somewhat confusing wizarding money system and helped frame relative value to compare to muggle money. What Would Weasleys’ Wizard Wheezes Do? is a helpful list of Weasleys’ Wizard Wheezes products and their uses. Unfortunately, some of the charts contain mistakes too but they’re the most efficient way to sum up a lot of information quickly.

So should anyone bother?

I think this book is great for someone who doesn’t want to really get that into Harry Potter but still wonders what everyone is going on about. Maybe a boyfriend/girlfriend whose significant other loves Harry Potter and they’ve never bothered. In these cases, the inaccuracies won’t cause any real problems, especially if the reader is willing to be corrected by their Potterhead (the name of a true Harry Potter fan). Just like Smart Pop Explains Marvel Movies and TV Shows, this one is also a good on-the-go guide for small snippets of reading or great for the bathroom that guests can pick up after reading the shampoo bottle.

Anyone who is really into Harry Potter is probably not going to be impressed with this book. Maybe a group of Potterheads could play a game to find and correct mistakes. I suppose that is an option, but that doesn’t really seem like that much fun. Although the sense of satisfaction when fixing those mistakes is real! Still, this is best for a casual observer, not an intense fan.

Overall, I was underwhelmed with Smart Pop Explains Harry Potter Books and Movies. I was surprised because I thought the Smart Pop Explains Marvel Movies and TV Shows was well done. I do think the book has some use for that “semi-interested but not ready to jump off a cliff” person but I think that’s a rather small market. And not what the book advertises to be.

Smart Pop Explains Harry Potter Books and Movies is available now. Would you read this? Let us know on Twitter or in The Cosmic Circus Discord. And if you haven’t already, check out our review on Smart Pop Explains Marvel Movies and TV Shows!