Tim Dedopulos takes us on another wild adventure in She-Hulk Goes To Murderworld. The second novel by the author in Aconyte’s new Marvel Multiversal Missions Adventure series. His unique take on the classic choose-your-own-adventure book is extremely engaging and fun.

This time around you get to help She-Hulk solve a mystery and save the day. Can you make the right choices and be a hero?

[Note: While I am reviewing this book independently and honestly, it should be noted that it has been provided to me by Aconyte for the purpose of this review.]

[Warning: My review of She-Hulk Goes to Murderworld – A Marvel Multiverse Mission contains some spoilers!]

She-Hulk Goes To Murderworld isn’t just a story, it’s also a game. Similar to You Are (Not) Deadpool, to properly play you need to have some paper, a pencil, and a die (or like me, note and die roller apps). You absolutely cannot read the book without these. You see, as you read you have to keep track of multiple attributes and interchangeable items.

What’s more, the values of these attributes change throughout the story. If you aren’t writing down what happens with your attributes and items you will lose track quickly and that will have a negative effect on your enjoyment of the story.

She-Hulk starts with three main attributes, Power, Charm, and Concentration. These are your most important attributes and they have the most effect on the story. Other attributes are collected as you go but Power, Charm, and Concentration form your base character. As you come to choices in the book, often you have to roll a die or two and add or subtract different attributes. The outcome then affects which choices you can make.

Items can also be picked up as you go. There are scores of items but you are only allowed to hold five at a time. Some items can be used to access special story options, some help in fights, and some even affect attributes. Items can be very helpful and important so choose wisely!

As with any good modern game, there are also achievements. At the back of the book, there is a checklist of over forty achievements. The achievements are earned by encountering certain scenes in the book.

There are also eighteen different super achievements that are obtained by doing larger things like finishing with certain items or with your attributes at certain levels. Some super-achievements require multiple read-throughs, like finding all eight deaths. These achievements encourage re-reading because who doesn’t want to get them all?

Plenty of fun but…

She-Hulk needs to look into a case in California but she’s based in New York so she’s interested in hiring you to be her West Coast associate. In the world’s longest and strangest job interview, you join her in investigating her old nemesis Thursday Rubinstein, AKA Ruby. Ruby is being charged with murder but she claims she’s gone straight and is being framed.

As you investigate, the B-list villains come out of the woodwork, much to She-Hulk’s annoyance. And she lets you know it’s annoying! She-Hulk is known for fourth wall breaks in her comics and Dedopulos uses them liberally throughout She-Hulk Goes To Murderworld. It is hilarious because your character in the book is constantly getting confused by She-Hulk’s comments and asides but as the reader, you know what She-Hulk is talking about.

The story itself is a very interesting mystery with lots of characters obscuring the final baddie and their plan. There are a lot of different scenes and situations which made the first read-through a total blast.

Unfortunately, the story was designed in such a way that you encounter almost everything the first time through. For a choose-your-own-adventure book, this is problematic. The draw of a choose-your-own is having a different adventure every time you read it.

However, I read She-Hulk Goes To Murderworld three times, making very different choices each time, and all that really changed was the order I encountered the different scenes, not the scenes themselves. I did reach different endings, but the main story was exactly the same, which didn’t capture my attention nearly as much as the first Marvel Multiverse Missions Adventure that I had the pleasure of reviewing.

There are twelve different endings which sound awesome but when everything leading to those twelve endings is the same it doesn’t hold your attention that well. I had read Tim Dedopulos’ other book, You Are (NOT) Deadpool, also a choose-your-own, before Murderworld, and that book was a different adventure all five times that I read it.

I had very high hopes for Murderworld but it just wasn’t the same. If it had been a traditional book I would have rated it very high because the story was very good and extremely funny but as a choose-your-own-adventure, it didn’t work as well.

So the rating for She-Hulk Goes To Murderworld is…

Honestly, rating this book is challenging. As I said in the last section, She-Hulk Goes To Murderworld didn’t quite live up to my expectations as a choose-your-own-adventure. The point of choose-your-own is to be able to read the book over and over and still feel that you’ve had a new and exciting adventure. Unfortunately, Murderwold does not have that re-readability.

However, it does have a really great story that was great to read once. Rolling dice and tracking attributes was tons of fun as well. Overall, I do recommend reading Murderworld, but probably just once or twice.

She-Hulk Goes to Murderworld by Tim Dedopulos is available now on e-books and physical copies at Barnes & Noble, BAM!, and other booksellers now! [As affiliates of B&N and BAM! we may receive a commission from purchases made via these links]

For more information about the book and other works by Aconyte, visit this site. What are your thoughts on this exciting new book from Aconyte? Let us know in the comments or over on Twitter! And if you haven’t already, check out my latest book review of Tim Dedopulos’ other Marvel Multiverse Mission Adventure by Aconyte books,  You Are (Not) Deadpool! 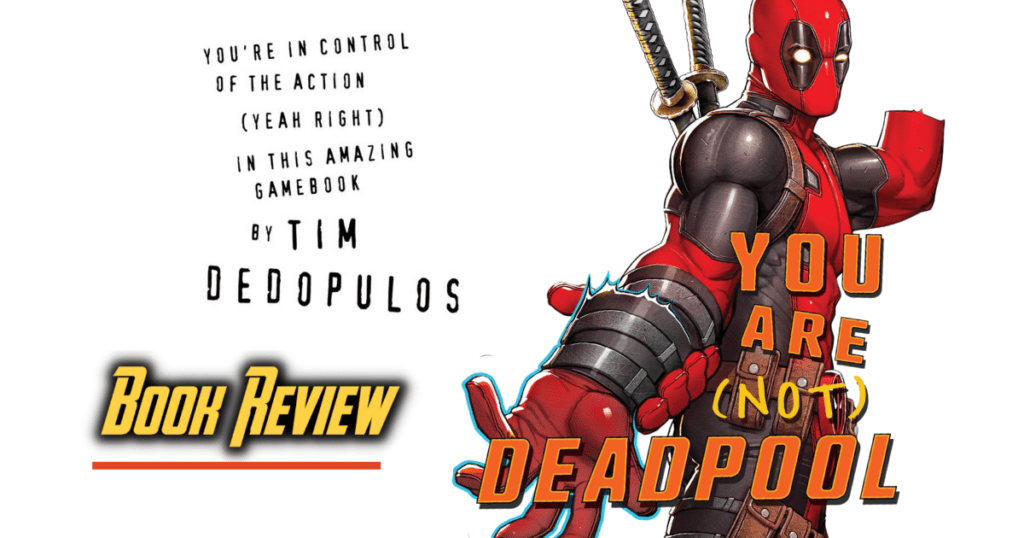