What if you could see three different versions of your life? And what if you could choose which of those three lives you wanted to live in? The catch is that once you choose you’re stuck, you won’t even remember that you made the choice, and you have to live with the consequences. This is Mr. Breakfast boiled down to its essence. Author Jonathan Carroll gives Graham Patterson a chance to choose his fate. Will he choose money or love? Of course, nothing is ever that simple, as Graham learns.

[Note: While I am reviewing this novel independently and honestly, it should be noted that it has been provided to me by Melville House for the purpose of this review. Warning: My review of Mr. Breakfast contains some spoilers!]

A dead end that isn’t a dead end

It looks like Graham Patterson is out of options. His comedy career (if you want to call it that) is going nowhere. He’s lost the love of his life, Ruth. He is headed to California to accept his brother’s job offer even though he doesn’t want to. But his brand new car broke down and now he’s stuck in a podunk little town waiting for it to be fixed.

Graham decides to go for a walk and passes a tattoo parlor with some amazing work showcased in the window. The images are so captivating that he has to go in, even though he’s never even considered a tattoo before. Inside he meets the artist, Anna Mae. After looking at more of her work Graham decides to get a tattoo. He chooses an interesting design of a bumblebee inside a frog, inside a hawk, inside a lion. Once Anna Mae is sure that he wants that one she gets to work.

When she’s finished she shares some very important information about his tattoo. Called the breakfast tattoo, it gives Graham the chance to visit two alternate versions of his life. Lives where he made different key choices and went down very different paths. He can stay as long as he likes in each life and return to his current life but after three visits to each, he’ll have to choose just one life. After he chooses that life will become his and he’ll forget all about the tattoo (which will vanish) and that he even made a choice. Graham is understandably skeptical but let’s just say he becomes convinced quickly.

A story out of order in Mr. Breakfast

Before we learn about Graham and his impending choice, we meet Ruth and James. Yes, that Ruth, the love of Graham’s life that he lost. James is a biographer looking to write a book about Graham Patterson. In the process of writing the book, he’s trying to solve the mystery of what happened to Graham. One day he just disappeared and no one knows where or why. 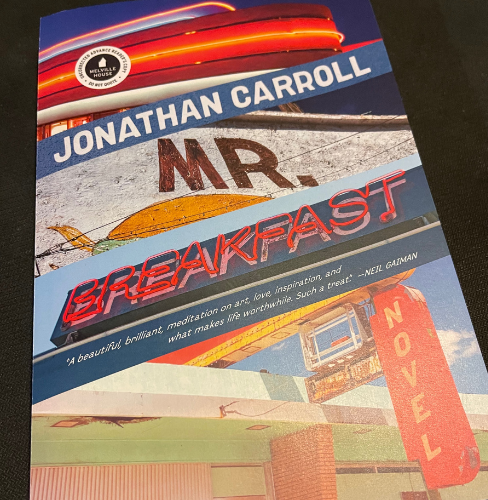 While it’s not directly stated, we get the impression that Graham became a famous photographer, then, at the height of his career, he just disappeared. That was several decades ago. Now James is looking into it again and that leads him to Ruth. It might seem like a dead end, asking an old flame what happened to a famous artist forty years after his disappearance, but it ends up being a good bet.

Turns out Graham sent Ruth five very special photos along with the cryptic instructions that if anyone ever came asking about him she was to show them the photos. If they could see what was in the photos she was to send them to a certain address. Graham included detailed descriptions of each photo which was good because everyone who looked at them just saw blank photo paper. Everyone until James. So Ruth gives him the address and sends him on his own adventure, chasing after Graham. We then leave James for a long time (we see him again at the end) to learn about Graham, his tattoo, and his choices.

Graham tries out one of his alternative lives and it seems great until it’s not. Not only does success not work out for him as he planned, but he also ends up dead very quickly. Interestingly enough, that’s not the end of the road to that life. After this misfire, Graham is unsure about trying out his third life, or love life, so he just rolls along in his current life. He even runs into someone else with the tattoo. He starts taking pictures and becomes the “famous Graham Patterson” that James ends up writing a biography about. The fact that he’s famous for photography instead of comedy is a bit funny.

But life is about making choices, not avoiding them. The longer Graham puts off choosing, the more the tattoo pulls his past, present, and other lives into his current one. A choice must be made so should he continue in his successful photography career even if it’s not what he really wants? Should he try to find love in his other life? What about his afterlife in his second life? Ultimately the choice is made. Do the positives outweigh the negatives? Not even Graham knows, after all, he forgot he made the choice.

Carroll’s tale of choices and consequences is fascinating. I read it all in one day because I needed to know what Graham would ultimately choose. I was certain he would choose success but I was hoping he’d choose love. In the end, some might think the choice was made for him but I think that it was simply that his true character came out, he could have chosen differently at that moment but he didn’t. It was buried under a mountain of failure and disappointment but when push came to shove, Graham was a good man.

The fun thing Mr. Breakfast is that the magic is very simple. The whole book isn’t filled with magic, Graham gets peeks at different lives but those lives are normal lives without magical aspects. We’ve all wondered “what if” at some point and it was fun to get to go along with someone who actually got to see the answer.

Moral of the story: be happy with what you have

Ultimately, the lesson behind Mr. Breakfast is to be satisfied with what you have. It might seem like a different life would be better, but there are pros and cons to every life. Finding contentment with the choices you make is the only true way to find happiness. See if you reach a similar conclusion after reading Jonathan Carroll’s Mr. Breakfast.

Mr. Breakfast arrives on shelves on January 17th. Are you excited to check it out? Let us know on Twitter or in The Cosmic Circus Discord. And if you haven’t already, check out our recent interview with Jessie Mihalik!