S.A. Sidor brings us back to that center of horror, Arkham, Massachusetts. In the Lair of the Crystal Fang: An Arkham Horror Novel, another eldritch being is trying to break free and destroy our world. This time, five Arkham residents have noticed the danger and come together to try and save the city. Andy Van Nortiwck, Jake Williams, and Maude Brion have faced terrors together before. They’re only too glad to join with Dr. Fern, a local psychologist, and Wendy Adams, a street-wise kid, to uncover what threatens Arkham this time. And put a stop to it. Find out if they can in Lair of the Crystal Fang.

[Note: While I am reviewing this novel independently and honestly, it should be noted that it has been provided to me by Aconyte for the purpose of this review. Warning: My review of Lair of the Crystal Fang contains some spoilers!]

The dirty underside of Arkham

In Lair of the Crystal Fang, we explore the confusing, dirty underbelly of Arkham, literally. Most of the story takes place in the sewers under the streets of Arkham. The mayor has finally pushed through his Big Drain project, an infrastructure initiative that will update and enlarge the Arkham sewers. But as work progresses on the project people begin to end up dead. The bodies are all found around openings to the sewers, leading some people to question the safety of the Big Drain project.

Then workers find something even more fantastic. As they were widening a smaller drain they came across an intersecting pipe that wasn’t on the map. The workers weren’t too concerned about it, the maps they have are so bad they’re almost better without them. When they begin removing the pipes they find a small, natural-looking cavern that is dominated by a large, pink, crystal stalactite, which they all begin calling a fang. No one is sure what it is or how it got there. It doesn’t match any local rocks. The mayor wants to just remove it and continue work but a local geologist insists it must stay where it is until they understand it better.

Ace reporter, Rex Murphy, watches the mayor go down into the sewers to investigate the discovery and knows this isn’t a normal situation. Politicians stay as far away from the mess as they can so if the mayor went down in the muck it must be big. He follows the mayor but before he can do more than see the fang he slips in the raw sewage and is discovered. The police that accompanied the mayor decided that Rex must be the one killing people and leaving them by the sewers. After all, why else would he be down in that disgusting place? They arrest him and claim the case is solved. At the station, the police show Rex certain evidence in an attempt to force a confession from him. It doesn’t work but he does learn more about the “lamprey”, the name the sewer killer has given himself. When he finally gets released he shares this information with fellow reporter, Andy. Together they form a plan to go back into the sewers and hunt the lamprey story where it lives.

At the same time that Rex and Andy are chasing their story, Maude Brion is a prisoner at the local sanitarium. The doctors are convinced that she is mentally disturbed because of the stories that she tells about giant spiders in the Amazon jungle (they’re real, for Maude’s story see The Cult of the Spider Queen).

Drugged into a state of constant terror, unable to tell reality from fantasy, Maude attacks her original doctor. Afterward, she is assigned to a new one, Dr. Fern. During a hypnosis session, Maude and Dr. Fern share a vision that draws Dr. Fern into the world of the occult that surrounds Arkham.

Dr. Fern, acting on her vision, tracks down Maude’s explorer friend, Jake. She also finds street urchin Wendy, who was in her visions.  Together with Andy, who joins them after he and Rex are attacked in the sewer by the lamprey, these five race to discover what is really happening with the crystal fang and who is threatening Arkham now.

S.A. Sidor’s Lair of the Crystal Fang is a great murder mystery with a supernatural twist. I really loved the main storyline and the main five characters. It was also really cool to dip into the lamprey’s mind and hear their logic before we knew who they were. The only real problem was how many characters there were to follow. Within the first couple of chapters, there were already over a dozen different characters that the storyline was following.

It was unclear who was an actual main character and who would prove unimportant which left me with a lot of information to keep track of. Even when a few supporting characters begin to fall aside, more pop up to take their place. Eventually, you realize who the important characters are but the story keeps jumping to follow lesser characters.

The biggest drawback to having so many different characters is that you don’t form a real connection with them. The story was still engaging and the mystery was well-laid, but the emotional investment was missing. I really enjoy becoming emotionally invested in characters. The best stories I tear up just thinking about what my beloved hero must face. That was missing in the Lair of the Crystal Fang.

Good ending to a nice read

In the end, Sidor managed to surprise me with who the lamprey was. Of course, he held back some vital information that would have allowed me the connection, but all’s fair in love and mystery novels. I don’t feel like what he held back was unfair, because looking back at the story, there were enough breadcrumbs left. Honestly, I thought it was going to be a random person and it wasn’t, which was great.

Surprising me is rare and I liked that. It helped make up for the overwhelming cast. Overall, this book is great for anyone liking the supernatural, anyone who’s already a fan of the Arkham Horror series, or anyone who loves murder mysteries.

Lair of the Crystal Fang: An Arkham Horror Novel by S.A. Sidor is available now from Aconyte Books and other booksellers. Are you planning on reading it? Let us know on Twitter and on The Cosmic Circus Discord! And if you haven’t already, check out our most recent Arkham Horror Novel review, In the Coils of the Labyrinth!

Review: In The Coils of the Labyrinth: An Arkham Horror Novel 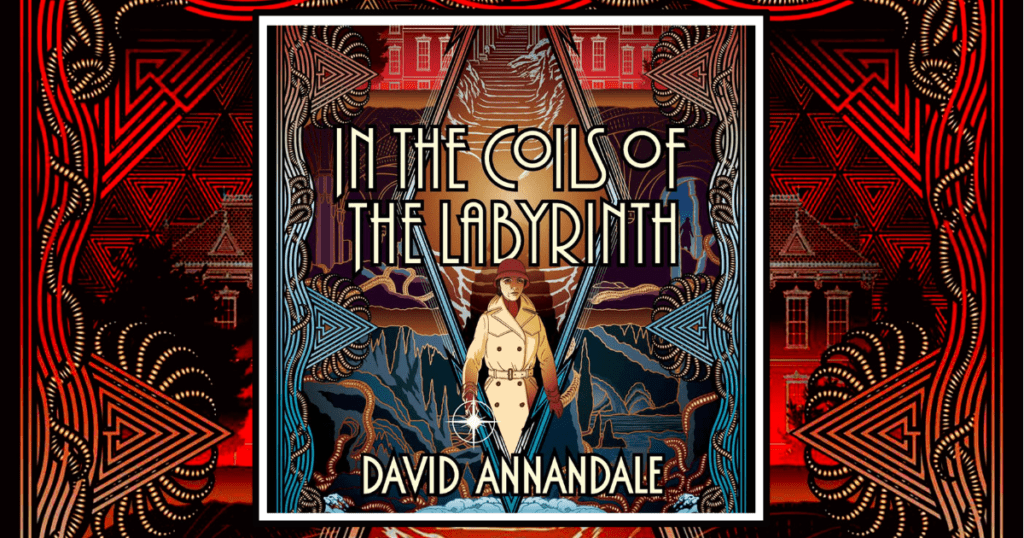