Edge of Catastrophe: A Terraforming Marvel Novel is set six hundred years from now when humans have finally moved off of planet Earth. Over two centuries have been spent trying to terraform Mars to allow humans to survive there and things aren’t going as well as hoped. While a handful of cities have been established, they are all encased within protective domes. All of the food is grown in vertical farms that are housed within environmentally controlled warehouses.

With support from Earth taking six months to reach Mars, it’s a very precarious system. This is brought into harsh focus when crops all over the settlement begin failing at the same time. As panic begins to spread, authorities look for a scapegoat. They find one in botanist Mel Erdan. As Mel rushes to clear her name and uncover the truth, the fear of food shortages causes Martian society to start coming apart at the seams. Can Mel save herself and Mars?

[Note: While I am reviewing this novel independently and honestly, it should be noted that it has been provided to me by Aconyte for the purpose of this review. Warning: My review of Edge of Catastrophe contains some spoilers!]

Jane Killick’s book, Edge of Catastrophe, shows us a Mars that humans have been trying to colonize for just over two hundred years. They even crashed one of the moons into Mars in an attempt to jumpstart some internal processes and make the planet habitable.

Despite humanity’s best efforts, Mars remains largely inhospitable to humans. People have to live inside giant environmentally controlled bubbles and food is carefully grown in similar circumstances. Scientists calculate exactly how much and what type of food is needed and that is what is grown.

It is a system with no wiggle room. Scientist Mel Erdan is working to recreate potatoes as a new wonder food. Using genetic manipulation Mel creates a potato that is high in protein with edible leaves that will provide vitamins that Martians cannot get elsewhere.

She’s asking a lot out of the humble potato but things are looking good. Until the day her plants are ready to be harvested. All of the plants are dead, and the potatoes are inedible. Mel is devastated but resigned to figuring out her mistake and trying again. Feeding the Martian people is Mel’s driving force.

On the same day that Mel’s experiment fails, crops of potatoes across Mars begin failing in exactly the same way. The weird thing is that Mel’s potatoes were still experimental, they haven’t been planted on the farms yet. No one can figure out why the crops are failing. But when authorities learn of the similarities between Mel’s experiments and the farms they immediately make her a scapegoat and arrest her. 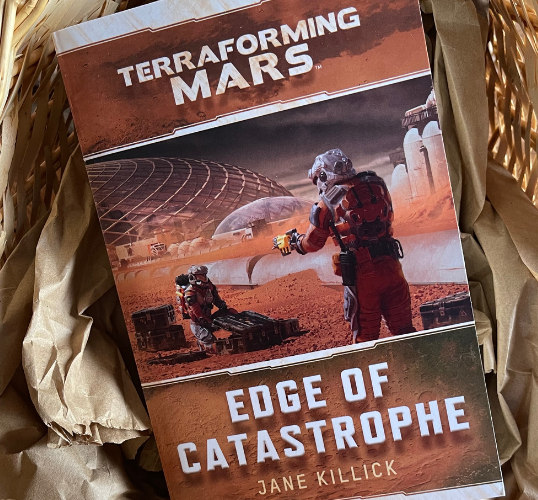 Mel is overwhelmed by her sudden questioning and arrest. She has no idea how her experiment could be linked to the farm failures. She tells the police exactly that but they don’t believe her and send her to the capital city for more intense questioning.

As she is being transported to the central police station the train she’s on is attacked by terrorists looking for food. Mel realizes that if she is thrown in jail she’ll never be able to clear her name or find a way to feed Mars. She sees an opportunity in the railroad attack and decides to run for it.

Now Mel has to work around criminals, riots, and the police, to try and figure out what is happening. Uncertain of who to trust she carefully picks her allies and starts unraveling the mystery of who tampered with Mars’ food supply. But solving the mystery is one thing, finding a way to feed Mars is another. Mel isn’t sure she can do either but if Mars is to survive she has to do both.

I wasn’t sure what to expect from Edge of Catastrophe but it was so much better than anything I thought it would be. Edge of Catastrophe is not actually about colonizing Mars. Killick’s story is a conspiracy story that happens to be set on Mars. Mars adds some complicating factors to Mel’s adventure, but beyond that, it could have been set on Earth.

Martians are significantly taller than Earthlings and way less muscular, but mentally they are still human and have very human reactions to stress and injustice. Indeed, humans have left Earth but capitalism has followed them and companies have far more power than they should.

There is also racism but instead of being based on skin tone, it’s based on the planet of origin. Martians as a whole are seen as second-class to Earthlings. Many people, especially back on Earth, think that since Earth invested all the money to make Mars livable, and still sends supplies to supplement the population, Mars owes Earth. This causes a great deal of tension between the two planets.

Mel’s desire to liberate the food supply from Earth’s control is just another side of the same rebellion that brews under the pressure the food crisis causes. I imagine that subsequent stories are going to explore this even further.

Edge of Catastrophe is a fun science read

Jane Killick uses science to enhance Edge of Catastrophe. What I mean is that Killick wrote a good mystery with fun characters. Then she layered the science on top. I don’t mean that science isn’t integral to the story. It is very important. In fact, the story couldn’t happen without the science aspects.

But it’s important to note that this story doesn’t get bogged down by the science. The story isn’t dry in the least and nothing is going to be above anyone’s head. Edge of Catastrophe is relatable and interesting and I quite enjoyed it. Even if you aren’t a big science or space person this book is still enjoyable and I recommend it to everyone.

Edge of Catastrophe: A Terraforming Mars Novel by Jane Killick is available now! Are you planning on checking it out? Let us know on Twitter or in The Cosmic Circus Discord. And if you haven’t already, check out our review on another recent release of Aconyte, The Stars Beyond!

Book Review: The Stars Beyond: A Twilight Imperium Anthology