Book Review: Almost There: A Twisted Tale by Farrah Rochon Book Review: Almost There: A Twisted Tale by Farrah Rochon

We all love to ask these questions when thinking about our favorite stories. What if Cinderella didn’t lose her shoe? What if Belle hadn’t shown the villagers the beast? And what if Tiana had accepted the Shadow Man’s deal? How would these choices have changed their stories? Well, Disney’s Twisted Tale series allows us to indulge in these fantasies and see the story play out differently than the movies we all love.

In Almost There the premise is, what if Tiana made a deal that changed everything? Will she get what she’s always wanted? Will she want it once she gets it? And the most important question of all is, will it be worth the price?

Farrah Rochon leads us down the winding road of paths not taken to see how everything could have been if Tiana had chosen differently.

[Warning: My review of Almost There: A Twisted Tale contains some spoilers!]

She was almost there

Rochon picks up the tale of Tiana and Naveen near the end of The Princess and the Frog. Tiana is being pursued by Dr. Facilier, A.K.A. the Shadow Man, through the cemetery. When he catches up to her she threatens to destroy the amulet he’s been using for his dark magic. He offers her a deal, the amulet for her restaurant. But Tiana is stronger than that and tells him no.

Feeling his opportunity fading, he offers her something more, something she can’t get by herself no matter how hard she works. He offers to bring her father back. He passed away a few years back and Tiana misses him something awful. Tiana almost says no but in the end, she accepts the deal.

Facilier arranges a deal with his friends on the other side for her. She and Naveen will become human again and her father will come back from the dead as if he’d never been gone. He also arranges for Louis the gator to become human. No one but her and, for some reason, Louis will remember what happened.

In return, Tiana must give up Naveen and she must add a little bit of a potion from the Shadow Man to every pot of gumbo that she cooks up in her restaurant when she finally opens it. Facilier warns that if Tiana doesn’t keep up her end of the deal then everything will go back to the way things were. So for the sake of Naveen and her daddy, she buries her feelings for Naveen and faithfully adds the potion, even though she doesn’t want to.

A year later in Almost There: A Twisted Tale

One year has gone by since Tiana accepted her deal and she’s finding it to be rather bittersweet. On the one hand, she is beyond happy to have her daddy back. The two of them have opened a restaurant, the T&J Supper Club, and it’s a huge hit. She cherishes every moment she has with her daddy.

But on the other hand, her feelings for Naveen are as strong as ever. Making it worse, he and Charlotte, Tiana’s best friend, have become good friends so he is constantly around.  Tiana wishes things could be different but she doesn’t see a way out so she keeps holding up her end of the deal. 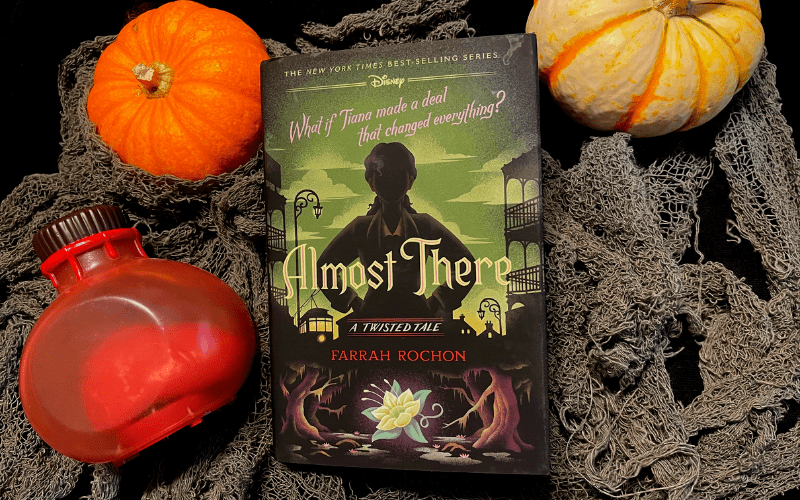 But the Shadow Man wasn’t completely honest with Tiana. Giving up Naveen and including the potion in her gumbo wasn’t the price his friends on the other side had demanded, those were his provisions. They had another prize in mind and the time for payment has arrived. Dr. Facilier has miscalculated though, he thought that his friends would simply come and extract their payment from Tiana, but it turns out that with a price this high she needed to sign the deal, which she never did. This means that unless she signs by Mardi Gras night, Facilier will be left holding the bill.

Facilier certainly doesn’t want to have to pay Tiana’s debt to his friends so he tries to bully her into signing the deal. Thankfully Tiana is smarter than that and refuses to sign. The Shadow Man becomes more desperate and makes threats against Tiana and her family but she still stands firm.

At the same time, an odd fog moves in around New Orleans. It’s so thick people can hardly see where they’re going. Then a weird creeping algae appears on the river and covers everything in its path. At first, Tiana believes they are just coincidences but she begins to think the Shadow Man has a hand in these and other strange happenings around the city.

Tiana begins to worry that Facilier will make good on his threats to hurt her family and worries about what to do. Suddenly she has an epiphany, maybe the person who helped her last Mardi Gras can help her again. She decides to head off into the swamp to find Mama Odie and ask her advice. But she isn’t going alone. Charlotte refuses to be left behind and she tows along Naveen for help. Then they run into Louis down at the docks and the four of them take to the swamps together.

Hard Lessons in Almost There: A Twisted Tale

When Tiana took the easy way out last Mardi Gras she skipped out on learning some very important lessons. If she wants to save those she loves, and indeed the entire city of New Orleans, she’s going to have to learn them now. Her friends are there to help her but she needs to learn how to let them.

She needs to learn acceptance of a lot of things. And she’s going to have to decide what truly matters the most to her. Also, she has to discover what price she’s willing to pay to have what she wants. It’s a lot of things being thrown at her all at once. But her decisions affect more than just herself and as she begins to see this she’ll have to make some very hard choices. Will she make the right ones in time?

Almost There, like all good fairy tales, contained some important life lessons. I won’t spill on what those lessons are but let’s just say that they are just as important for us today as they were for Tiana in 1927. This book was even more heart-wrenching than the movie because it’s one thing to realize that love is important and that you need to slow down and enjoy life. But it’s a completely different thing to have to give up someone you love to protect the others that you love.

Tiana really has to make some harsh choices here and I don’t think anyone really blames her for accepting the Shadow Man’s deal that brought her father back. The fact that she was able to make the right choices, in the end, shows how very strong she is. Even more so than when she decides to stay a frog in the original story.

Farrah Rochon weaves a beautiful tale in Almost There. The richness of New Orleans life comes through the story wonderfully too. All the food, music, and celebration that is New Orleans at Mardi Gras was a joy to take in.

It was also nice to have voodoo explained as being a religion that focuses on good energy instead of dark magic, as it is often shown in the media. A hard line was made between the dark energy that Dr. Facilier used, and voodoo, which was refreshing. I always hate when religions or cultures are misrepresented due to popular prejudice. Rochon makes sure to avoid this in her book.

Anyone can relate to Tiana and her choices so everyone can enjoy this story. And anyone can benefit from this great representation of New Orleans in the early 1900s. I recommend Almost There to everyone and all ages. Curl up with this book and some beignets this fall and enjoy!

Almost There: A Twisted Tale by Farrah Rochon is available now. Have you read the novel? What are your thoughts on it? Let us know on social media. If you haven’t already, check out my other latest review, Uncanny Times: A Huntsmen Novel!