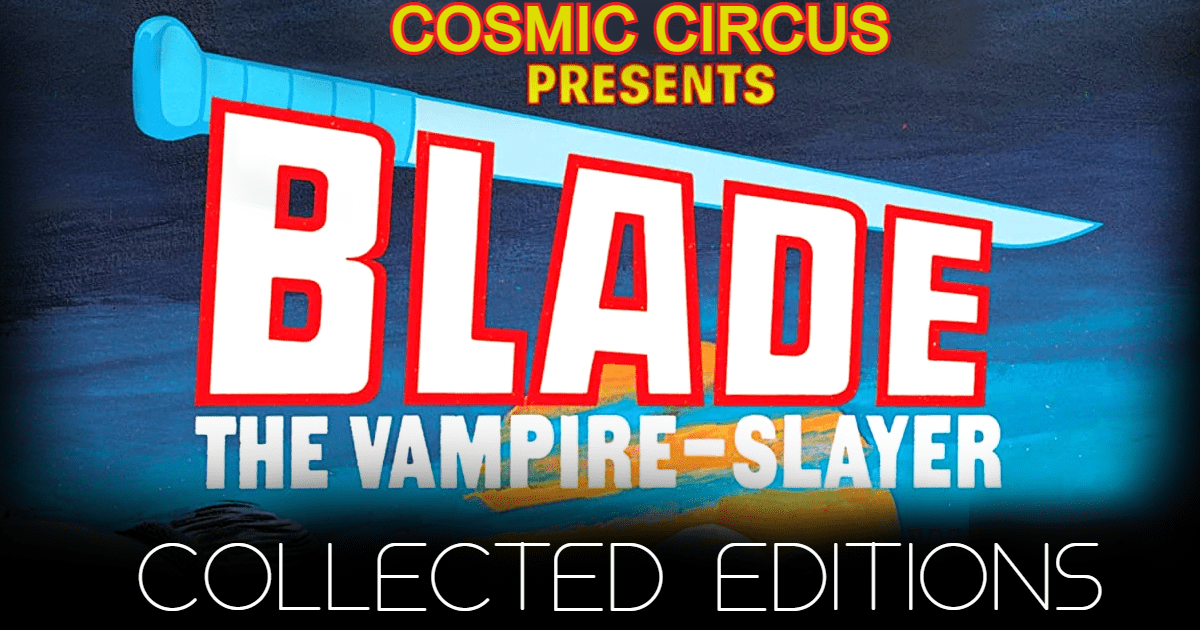 While preparing our massive Blade comics reading guide, I realized that it can be difficult for trade readers to figure out where to start with the character in 2022. There are several Blade TPBs out there, but none of them are a straightforward Blade omnibus, and there are several major gaps left uncollected.

In fact, most of his trades are loose collections without one cohesive storyline! So it can be messy and even stressful trying to figure out which solo Blade trades to look for. But have no fear, because Vin is here! The Marvel Horror Magazine Collection has a super fun bunch of important classic horror comics. Marvel Preview #3 is a MAJOR issue featuring Blade’s full origin story for the first time (written by a very young Chris Claremont), and #8 is one of the most brilliantly horrific Blade stories ever told (Marv Wolfman & Gene Colan at their very best).

The other issues feature the first appearance of Varnae the Vampire Lord, Satana, the Zombie (Simon Garth), and more terrifying tales by Doug Moench, Steve Gerber, Tony Isabella, and Gerry Conway. The black and white print quality varies from issue to issue, but overall this is one of the best books for any fan of Blade and a must-have for fans of retro Marvel horror. [Black and white, classic Blade]

The biggest strength of Marc Guggenheim’s Blade is the flashbacks, which present Blade’s origin story cohesively in one place for the first time, like a Blade: Year One series. This is the best place to start if you’re interested in Blade’s true origin story (different from the movies!).

Between the flashbacks, Guggenheim also writes several interesting one-off stories in the modern day that vary in quality, but are okay for casual reading. While the run features many controversial changes to Blade’s canon, it’s fun for new readers and features great cameos like Doctor Doom, Spider-Man, Morbius, and Wolverine.

I definitely recommend the Complete Collection because “Wolverine vs. Blade” has some stellar art by Dave Wilkins. Overall, this series works as a modern Blade run that doesn’t forget his classic roots. [Modern & classic Blade] Blade gets just one page in Marvel Comics #1000, but it’s one of my favorite Blade stories ever. “Blade Week” by Jim Zub is a brilliant short that reminds us that Eric Brooks is both a hunter and a human.

If you just want the Blade story, you don’t need the trade. But you’d be missing out, because the rest of the book is filled with over 100 stories that are just as wonderful, celebrating nearly every character in the entire Marvel universe. Completely worth every penny. [Modern Blade]

Even though Blade vs. the Avengers is in the Ultimates universe, this is actually a really good Blade story. Fast, high energy, and full of “OH $%&^” moments, this is pitched like an awesome “one man vs. the world” action movie as Blade has to take down an entire team of vampirized Avengers.

While the ending is a bit underwhelming and it misses out on the human side of Eric Brooks, this is still a fun look at Blade at his most ruthlessly efficient. A great read for modern Blade. [Modern Blade]

Full of horror, action, comedy, and a bit of romance, Mutants vs. Vampires is the perfect trade for fun bonus stories starring our favorite characters against some nasty vamps. I really enjoyed the “Blade” one-shot by Duane Swierczynski, the “Storm & Gambit” one-shot by  Chuck Kim, and the X-Men vs. Vampires anthologies, though none of them are must-reads.

I was pleasantly surprised to see the trade also includes the iconic Storm vs. Dracula story from Claremont’s Uncanny X-Men. Highly recommended for a light weekend read. [Modern Blade] Blade is not the star of the Death of Doctor Strange Companion, but the “Blade” one-shot is worth reading for his story development. After the events of Avengers #45, this is one of the few stories showcasing Blade’s new role as the sheriff of Dracula’s Vampire Nation. If anything, check it out for the gleefully stylized art!

Since each story is a different character’s reaction to the death of Doctor Strange, if you just care about Blade, I might recommend finding his issue separately. But if you’re interested in the bigger Marvel universe, including the future of the Midnight Suns, then this trade is probably worth getting.

Some of these stories may have major ramifications for Marvel’s supernatural characters going forward. [Modern Blade]

Like all the other tie-ins here, the new Darkhold series is fun but inessential for Blade. “Alpha” and “Omega” are a great two-part Scarlet Witch/Doctor Doom story with a little action by Blade and the other heroes.

The one-shots in between are short horror stories set in nightmarish alternate realities. Blade’s takes place during a vampire apocalypse. They all have really interesting creative teams and unique twists, so each one is worth reading to see what you like.

For Blade fans, the “Darkhold corruption” premise might sound like a family-friendly version of Midnight Sons: Midnight Massacre. If you’ve read that story or you’re familiar with Scarlet Witch history then this trade won’t tell you anything new about Blade or the Darkhold. But nonetheless, I do recommend it for anyone excited by alternate universe horror stories or an awesome Scarlet Witch/Doctor Doom showdown. [Modern Blade]

Brave New World is an assortment of 15 tie-in issues that are mostly skippable, but somehow this Blade story is uniquely spectacular. “Lessons” by Simon Spurrier is a quirky short story where Blade acts as a substitute teacher while looking for vamps. I really love Spurrier’s mix of horror, comedy, and charm.

Don’t worry if you haven’t read Secret Empire, because the Blade story is totally standalone! But given the mixed quality of the other issues, I wouldn’t recommend purchasing the trade at full price. [Modern Blade] 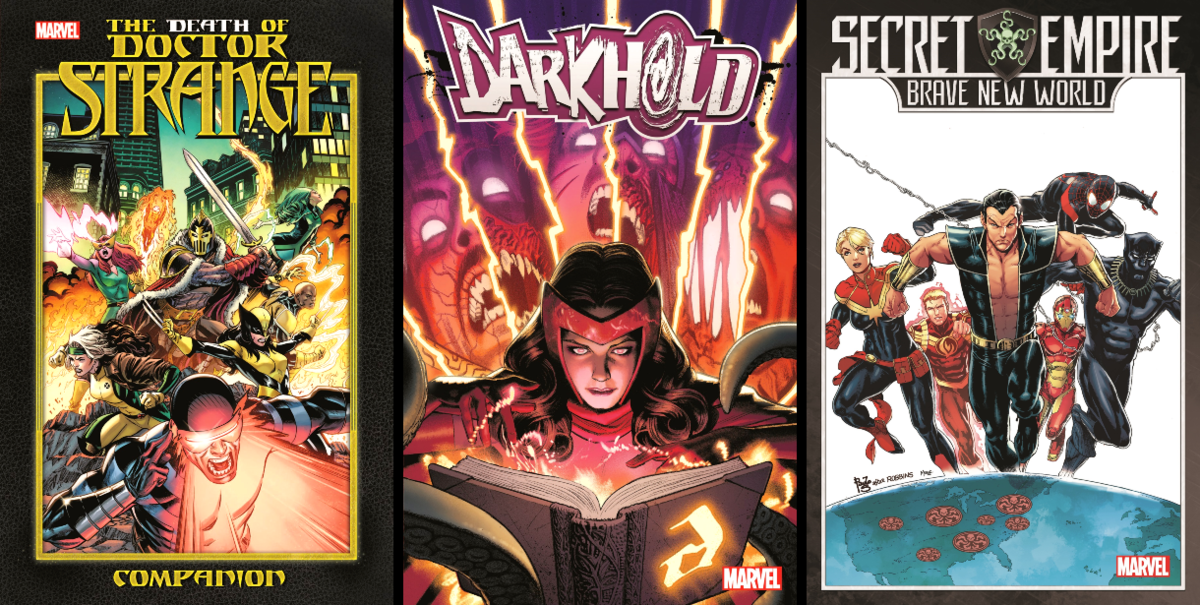 Spider-Man teams up with Blade, Devil Dinosaur, the Thing, and other heroes across the Marvel universe! This trade is another assorted set. It might be great for a big Spider-Man fan, but for Blade it’s mostly skippable.

“Spider-Man vs. Vampires” was originally published as a three-part digital series in the early days of digital comics, and while it’s fun, it feels unfortunately unnecessary, even for Blade fans. The most entertaining part of the story is watching Blade’s haircut change from panel to panel. [Modern Blade]

Like Undead by Daylight above, Blade: Black & White is a neat collection of Blade’s early years, including his first major solo stories (in Vampire Tales), his full origin story (in Marvel Preview), a side story featuring Dracula and Blade’s mother (in Shadows and Light), and his grand finale (“Crescent City Blues”)!

Unfortunately, the print quality is fairly bad, which makes it difficult to read since the whole book is in black and white. This is a fantastic selection of early Blade comics, but the abysmal production value makes this trade a poor way to read them. [Black and white, classic Blade. Some sources mistakenly say “Marvel Preview #6” instead of #8]

“Crescent City Blues” is important, but it’s easy to find in other trades. Blade (1998) is so boring that it got canceled after three issues. (I’m not kidding – the Morbius cameos are more exciting than the actual Blade story.)

Most of the trade is taken up by Blade: Vampire Hunter (1999). It’s a strange reinterpretation of the character as a futuristic science fiction messiah narrated by a depressed demon. It sounds zany and fun, except it’s overbearingly serious and the storytelling is incoherent, so it’s nothing more than a painful chore to read. I can only suggest this as a bizarre What If? story, and even then I wouldn’t recommend it.

Gambit and Team-Up (Spider-Man/Blade) are fun but totally skippable. These two are decent for super fans because Gambit #4 is the first time comics Blade was inspired by Wesley Snipes, and Team-Up #7 is the only time Blade co-creator Marv Wolfman wrote Blade during the Snipes movie era, but neither are really worth seeking out.

The most redeeming aspect of this collection is the Batman-inspired “Sins of the Father” one-shot, but it’s a movie tie-in outside of comics canon. This single story is NOT worth the price of the book. So those are my thoughts on all the Blade trades with his solo stories! Remember to check out our full Blade reading guide for other runs and team appearances! What are you excited to pick up next? Let me know on Twitter @vinwriteswords and remember to follow the site @MyCosmicCircus as we gear up for Blade joining the MCU soon!