Greeting suckheads, and welcome to the Blade comics reading guide!

Cursed at birth when the vampire Deacon Frost bit his pregnant mother, Eric Brooks was destined to become the great vampire hunter he is today. Taking the name ‘Blade’ after his weapons of choice, Blade has traveled the world for over seventy years on his quest for vengeance against vampirekind.

As we prepare for Marvel Studio’s new film starring Mahershala Ali, here are the most important comics you need to get started with Blade!

Although Blade had a long-running role in the 1970s’ Tomb of Dracula, he really evolved into his iconic character during the 1990s with the Midnight Sons crossovers and Wesley Snipes’ onscreen portrayal in Blade (1998).

Since then he’s been a steady supporting character across a number of teams. Joining forces with the Avengers, X-Men, Midnight Sons, MI13, Deadpool, and even the great-granddaughter of Abraham van Helsing, Blade’s singular area of expertise has made him one of the unifying factors of the Marvel universe.

There are so many great comics featuring the Daywalker, so scroll down, pick some runs, and start your hunt!

Be sure to also check out our Midnight Sons articles and the Morbius Reading Guide for more midnight madness!

“The older vampires warn them about me. I like that.“ Blade’s first appearance is in Tomb of Dracula #10, created by Marv Wolfman and Gene Colan. Young and hot-headed, this early version of Blade joined a team of vampire-hunters on his own vendetta against Dracula.

Although Blade is only a side character, his role gets more and more important as the creatives continued to flesh out his history and future. More importantly, these are just great comics. With godly art by Colan, satisfying plots by Wolfman, and a romantic mix of tragedy, hope, and horror, Tomb of Dracula is one of my favorite series of all time.

After the Montesi Formula, Blade was put on hiatus until the 1990s. Reinvented in a bonkers Tomb of Dracula revival by Blade creators Marv Wolfman & Gene Colan, the new rageful lunatic version of Blade was a major character in the Midnight Sons, a comics line of supernatural superheroics maxed out with 90s excess. As a Midnight Son, Blade began hunting more than vampires, expanding his reach to any kind of demonic threat. This edgy era also saw Blade’s partners Hannibal King and Frank Drake undergo their own 90s-style evolutions in Nightstalkers (1992) by Dan Chichester.

Picking up immediately after Nightstalkers, Blade got his first solo book in 1994. Although this run dealt with the aftermath of the Montesi Formula and the end of the Midnight Sons, Blade: The Vampire-Hunter (1994) is able to stand alone as a strong character-focused series. The art is spectacular, Blade’s tragic struggles are well-written, and despite the over-the-top 90s trappings, the series successfully pulls off a new style of mature horror.

While it’s commonly believed that Blade transformed overnight after the Wesley Snipes movie in 1998, the truth is that Blade’s modern characterization actually started in the comics. 1991’s Tomb of Dracula introduced his black leather jacket and short hair, 1992’s Nightstalkers introduced his body armor, and 1994’s Blade The Vampire-Hunter introduced a relaxed coolness to his personality. The Snipes version of the character combined these elements with his own unique spin, creating the definitive version of the character for years to come.

Be sure to check out the Morbius reading guide to read this era from Morbius’ point of view! 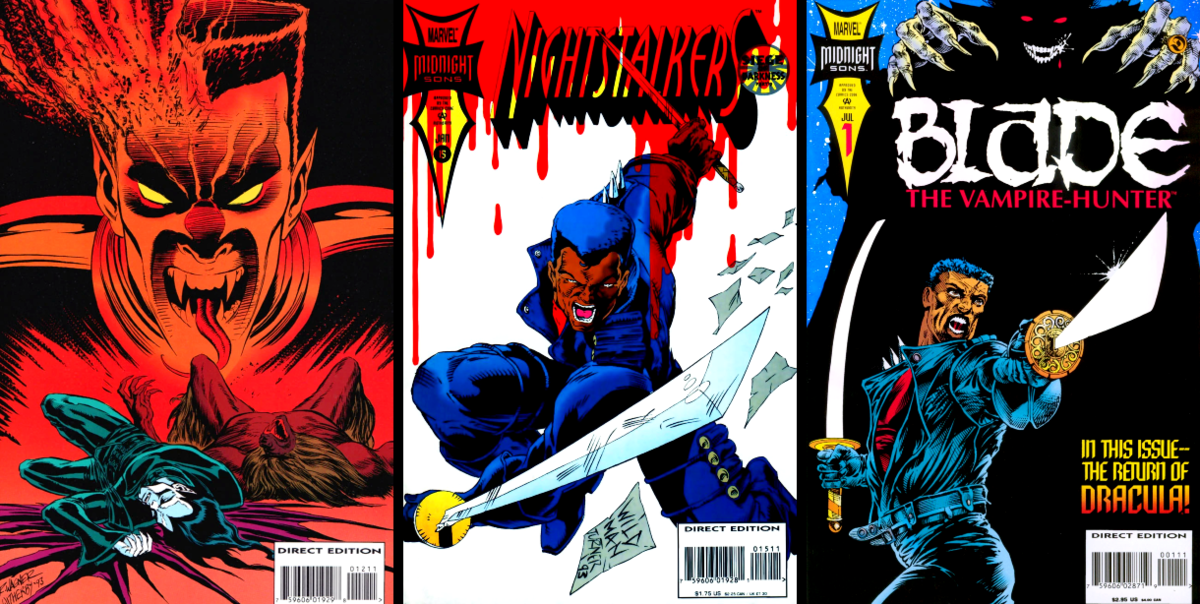 Excited by the Blade movies, Marvel Comics pumped out a series of short runs, half of which are worth skipping. The most continuity in this era is that Blade sometimes operates out of New Orleans – everything else changes from run to run.

Blade (1998) presents a 100% standalone story that ignores all previous continuity. Compared to the character-rich, continuity-heavy series from 1994, this is an easier place for new readers to jump in, but it’s so safe that it might be a bit boring.

Blade: Vampire Hunter (1999) is a very weird series set in a 90s-extreme sci-fi future. Although it’s a cool change of setting for Blade, it’s probably the weakest of all the solo series. The story gets slightly better as Blade connects to his familiar past, but it’s never coherent enough to matter.

Blade MAX (2002) is easily the best of the solo series. Being totally standalone makes it great for new readers, and the gritty R-rated style matches Wesley Snipes’ portrayal well. Like the other solos, it tries to rewrite Blade’s canon a little bit, but the changes aren’t too egregious. Most of all, this series is refreshing because it focuses on Eric’s humanity, the true mark of a good Blade story.

Tomb of Dracula (2004) is another great series from this era. Now matured with experience, Blade joins an all-new generation of vampire hunters led by Noah van Helsing as they try to stop Dracula from rising out of his tomb yet again. In the 2000s, Marc Guggenheim & Howard Chaykin teamed up to launch Blade (2006). This 12-issue series is not only the longest Blade solo in Marvel history, but it’s also the best version of Blade’s origin in modern comics. Although there are several weird plot twists and canon contradictions that could have changed Blade forever, the most offensive changes have been thankfully ignored by later writers.

Most importantly, Blade (2006) was also a test-run for Guggenheim’s style on Arrow. The series intercuts a modern storyline with flashbacks, telling Blade’s origin story coherently and cohesively in one place for the first time. Treat this like “Blade: Year One”.

Captain Britain and MI13 (2008) is a great series starring a British team of superheroes. More than just a fun comic, Captain Britain also pushed Blade beyond his serious Wesley Snipes persona when he starts dating Spitfire, another British Vampire superhero. The whole series culminates in “Vampire State”, one of the best Dracula arcs in the modern era. After this, Blade and Spitfire’s story continued with the charming Spitfire one-shot in 2010.

X-Men: Curse of the Mutants (2010) was a strange crossover that clashed with much of Marvel’s vampire/Dracula continuity. Even though Blade has a big role in the series, I can only recommend the X-Men: Curse of the Mutants – Blade one-shot at the beginning of the event. Featuring an all-new vampire hunting team, Blade’s one-shot is a hilarious mix of comedy and tragedy, and a really fun way to take advantage of a character who is nearly 100 years old.

Mighty Avengers (2013) is also really good (and it’s short)! It picks up from Captain Britain and Deadpool: Dracula’s Gauntlet. “Not Your Father’s Avengers” (#11-14) is the main Blade stuff. This run also continues building Blade’s softer team-based character, including major flashbacks to his Young Blade years!

If you only read 3 titles from the modern era, Blade (2006), Captain Britain and MI13, and Mighty Avengers make for a great trilogy of runs.

After Mighty Avengers, Blade spent a couple of years without a stable team. But he made several fun guest appearances across the Marvel universe, from Falcon to Gwenpool, and even joined a Midnight Sons revival with Moon Knight, Elsa Bloodstone, and Man-Thing!

My major recommendations here are Deadpool, the Uncanny Avengers annual, the Secret Empire short story, Falcon, and Wolverine vs. Blade.

In 2018, Jason Aaron (superstar writer of Thor) took over the Avengers series and quickly brought Blade along for the ride. Although Aaron’s Avengers has been controversial among readers, his mix of action and introspection has actually given us some of the best Blade content since the 2000s. By giving Blade a new partner, a new purpose, and a new relationship with Dracula, Aaron has finally given Blade a fresh direction for the modern era. Aaron also set the stage for a new wave of vampire stories, by establishing an actual “Vampire Nation.” If you don’t want to read the whole run, the Blade highlights are “War of the Vampires” (#14-17) and Avengers #45.

Mark Russell fleshed out the new status quo of the vampire world in Blade: Vampire Nation (2022). With strong mystery, art, and jokes, this one-shot is easily one of the best solo stories featuring Blade.

Strikeforce (2019) is another strong pick. It’s a fantastic team of B-tier characters like Blade, Bucky, Spider-Woman, Hellstrom, and Monica Rambeau. The brilliant and weird character pairings make it another hidden gem. My only note is that the quality drops in #5-6 (filler issues), but #1-4 and 7-9 are definitely worth reading.

War of the Realms: Strikeforce – The Dark Elf Realm (2019) is a really good nightmare story about Blade’s psychology that continues the introspective quality of Aaron’s Avengers.

Marvel Comics #1000 (2019) has a wonderful short one-page story that gives one of the purest looks into Blade’s weekly routine. 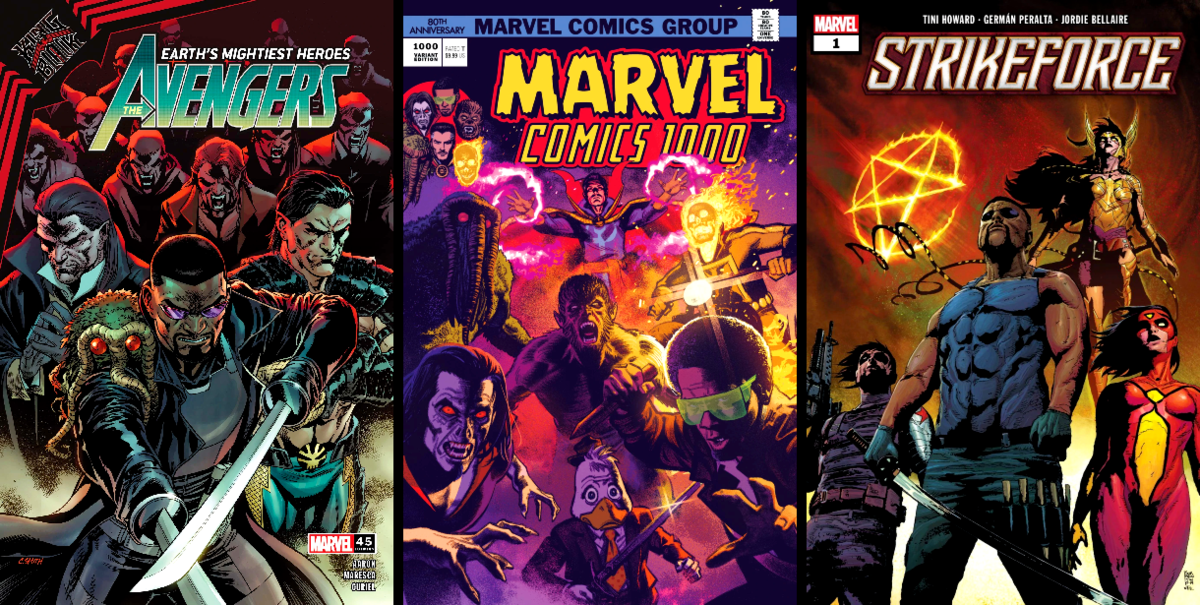 And that’s everything you need to know about Blade’s comics so far! What is your favorite interpretation of the Daywalker? What are you excited to see in the MCU? Let me know on Twitter @vinwriteswords and remember to follow the site @MyCosmicCircus for more Midnight Sons content coming soon!

In the meantime, check out our complete Midnight Sons reading guide here!