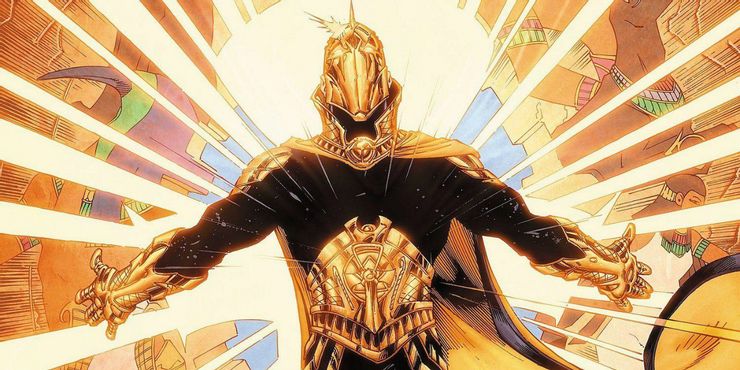 For some, the wait for Dwayne Johnson’s premiere as the protector of Kahndaq has felt like an eternity. Whispers about him taking on the titular role of Black Adam can be tracked all the way back to SDCC 2007, and now we’re about 10 months from the film’s premiere. But for me, the information that really piqued my interest regarding the Black Adam film was the inclusion of members of the Justice Society.

With Aldis Hodge as Hawkman, Quintessa Swindell as Cyclone, Noah Centineo as Atom Smasher, and Pierce Brosnan as Dr. Fate – this movie is seriously showing some love for the Justice Society. But with the release of new footage of the cast at DC Fandome 2021, there was one particular choice that caught my eye; one member of the cast that cast a shadow over the rest – Pierce Brosnan as Dr. Fate.

Dr. Fate has been a character that always deeply interested me. I don’t think I could seriously nail down when my first exposure to the character was, but I remember coming across the appearances in Smallville and the (short-lived) Constantine NBC series and being really intrigued. But, what’s really important to my current theory on the character is the (very limited) way we saw him at DC Fandome 2021.

The film presumably takes place in the modern-day, which immediately opens many trains of thought. The Justice Society is traditionally considered a team that operated at some point in the past. If they’re the starring characters of a story, it’s usually a story set in the past. If they’re featured in stories of the modern-day, they’re usually a team that used to operate and has now disbanded or died. That is where the heart of my theory lies.

Considering they’ve cast an actor far older than the rest to be Dr. Fate, I think he will be the surviving member of a Justice Society team of the past who comes back and unites these younger heroes to become a new team. To avoid any future story constraints you don’t really have to get specific, but the idea of an older and more jaded Kent Nelson uniting these heroes has great potential – especially with an actor like Brosnan. And especially if Kent is being reluctantly dragged back into duty by an old companion…

This brings me to the Helmet of Fate, which Brosnan’s Kent Nelson is only seen carrying by his side (even if it’s only mere seconds of footage). I think an interesting approach to this character would be one that addresses the relationship between Nabu and the person wearing the helmet. Perhaps Kent had escaped the hold Nabu had on his body and kept the helmet to protect others from the same “fate.” Then Nabu could speak through the helmet externally to Kent and lead him to unite the younger heroes we see.

It would be quite the extravagant setup that may lead to Kent Nelson making the ultimate sacrifice by donning the helmet in a moment of need, giving his body over once again to Nabu. I do think that it’s important to note that the two different times we saw the Helmet of Fate in the Fandome video, it wasn’t being worn by anyone.

Additionally (and alternatively), it could be important to note that Bodhi Sabongui’s role in Black Adam is still unknown. I think general guesses and assumptions lead people to think he plays Osiris, the brother of Isis (Sarah Shahi). But I’ve also seen some people guess that he might play the son of Isis; though it could be an amalgamation of the two with Osiris being Isis’ son. But, for a moment, let’s play the ever-so-lovely blind speculation game.

Perhaps over the course of this film (that I’ve invented in my head at this point), Kent Nelson becomes more properly acquainted with Nabu and the identity of Dr. Fate over the course of the film and realizes that he’s a force for good. Then in the end when he sacrifices himself, it’s more that Kent has resolved to sacrifice his whole life instead of just his body to Nabu. Then the Helmet of Fate is handed off to Khalid Nassour and he joins the newly formed Justice Society as a new up-and-coming hero.

This could also tie into a character arc for Hawkman, with him needing to grow into a leader but thinking too low of himself. Then by the end, he could be ready to lead this young kid as a new hero. Sure, the reality is that he probably (and more simply) just plays the son of Isis; but it’s fun to speculate.

Dr. Fate is probably the most exciting addition to the DC world of the future. I’m excited to see how Pierce Brosnan, Dwayne Johson, Jaume Collet-Serra, and the rest of the team treat this iconic character that plenty of fans have been waiting for.

I’ll be sure to see how well this theory has aged when Black Adam finally hits theaters on July 29th, 2022.

Check out the DC Fandome teaser for Black Adam down below.