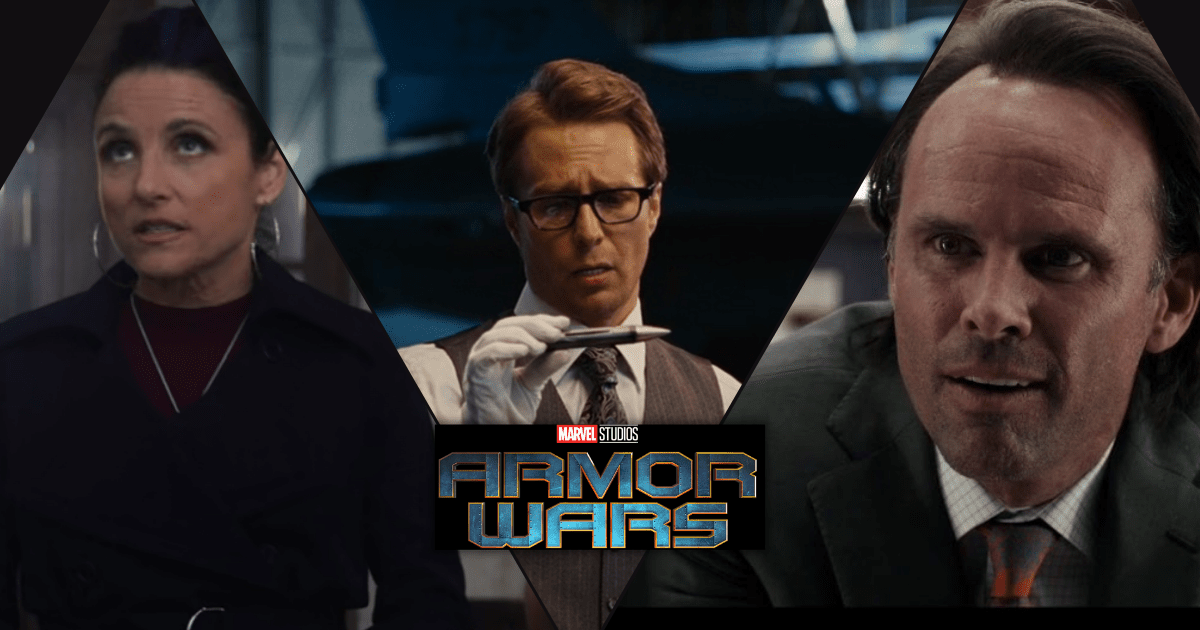 Our Editor-in-Chief Lizzie Hill’s report yesterday of the working title for ‘Armor Wars’ immediately made me want to bust out some dancing shoes to glide across the floor like one of my favorites: Justin Hammer. A talent like Sam Rockwell is not one to be glossed over or ignored easily, so somewhere deep down, I knew he would be returning to the MCU in some capacity. So you can imagine my excitement when I realized that the newly revealed working title for Armor Wars may very well be not only a big hint at Hammer’s return but a clue that he’ll have an important part there.

Beyond the love of his slick moves, Christopher Marc of The Ronin and I bantered on Twitter a bit over this…

looks like Justin Hammer's return for #ArmorWars is all but confirmed pic.twitter.com/L6rVKUaDax

The knowledge of the threat of many arms dealers running around is both concerning and perfect for a story focusing on the legacy of Tony Stark (Robert Downey Jr.) and the technology he left in his death.  Emily VanCamp’s Sharon Carter now has classified access to military secrets and armory, which normally would be alright. However, the reveal at the end of The Falcon and the Winter Solider that Sharon is in fact the Power Broker changes everything. Suddenly her military and security clearance is much more sinister.

Before joining what was left of the Avengers, Ant-Man and the Wasp had their hands full in putting together a quantum tunnel for Janet Van Dyne to return through. Ultimately succeeding in their goal of acquiring it, they still had an obstacle.

Last month, Christopher Marc also first pointed out an IMDb listing that helps elevate the stakes in the new production, with the inclusion of one very smooth talker. In the midst of all the incoming chaos, another equally frustrating protagonist appears to have made his way onto the scene: Walton Goggins’ Sonny Burch. In spite of his southern charm, Burch plants himself in our heroes’ way with his access to black-market goods and a very mysterious Benefactor.

So where am I going with all this?

Well, as was revealed yesterday morning, “Rigatoni” is at least one of the working titles that Armor Wars is using. These titles very often give hints into important elements the projects contain. Now I realize this may be seen by some as a Mr. Fantastic style stretch, but it’s fun to speculate, and this is a “Speculative Space,” so here we go!

I suspect, based on Hammer’s personal menu and obvious predilection for Italian food in Iron Man 2, that the newly revealed working title for Armor Wars (“Rigatoni”) may very well be pointing a tasty and heavily sauced noodle at Mr. Justin Hammer not only appearing in the series but having a very key part in it.

See this Iron Man 2 clip on YouTube for reference…

In the clip above, Justin Hammer mentions, “Salmon carpaccio” (a famous dish from Venice), and says “I like my dessert first, had this flown in from San Francisco, it’s Italian y’know, organic ice cream.” I can only imagine rigatoni is his favorite pasta, and that this newly revealed working title is a fun wink and a nod to the villain’s love of Italian food.

Of course, as also pointed out by the Ronin article we previously linked, Justin Hammer is an important figure in the Armor War comics run. Even tho the live-action versions of the comics often barely resemble the comics themselves, it isn’t much of a surprise if the rumored but as-yet unconfirmed return of Sam Rockwell as Justin Hammer is on the way.

Now, we last left off with both Burch and Hammer in prison. Could they team up for a breakout or is it possible they have an extremely connected overseer such as Julia Louis-Dreyfus’ recently introduced, but highly influential, Val?

Val’s history in the comics has her running around with the elite of Europe, and perhaps not coincidentally, as a citizen of Italy, before joining up with S.H.I.E.L.D. and Nick Fury. Considering she’s gained her equivalents to Captain America and Black Widow, having an insanely resourceful genius like Justin Hammer would help round out a crew that mirrors the original six Avengers. Why and how Hammer and/or Burch returns to Marvel remains to be seen, but perhaps Val gets them out on the condition they report to her?

If the rumors and my speculation here are true, personally I can’t wait for the amazing talents of Don Cheadle and Sam Rockwell to go head to head again in Armor Wars. As Rhodey might say, “Hey, Hammer. Boom. You lookin’ for this?”

Whatever the scenario, we here at The Cosmic Circus are eagerly anticipating the return of our favorite dancing show-off, conniving, Italian food-loving, filthy rich, Tony-Stark-wanna-be!