Since I’d first heard of Apple TV’s Finch, I’ve been interested. It reminded me of Neill Blomkamp’s 2015 film Chappie, whose last 15 minutes interested me when I caught it on TV once and never watched it again. But when you throw a movie featuring Tom Hanks in front of me, I’m going to eat it up the first chance I get.

Before clicking play on Finch I looked up the IMDb, just to get a sense of what I was going into. Craig Luck looks like he’s new to screenwriting, so that’s pretty exciting. Co-writer Ivor Powell was an associate producer on a couple of genre-defining sci-fi films like Alien and Blade Runner, so that’s cool. But when I found out that the director, Miguel Sapochnik, was also responsible for the Game of Thrones episode “Battle of the Bastards” my enthusiasm shot to an all-time high.

Finch does a lot, and I think that’s both its biggest strength and weakness. It does so much that it struggles to keep focus, but when you play 100 hands of blackjack, you’re bound to win once or twice. Between the cast, the confusing story, and the overwhelming attempt at sadness, there are some high highs and low lows to be had in Tom Hanks’ latest shot at a golden statue.

Of course, when you have someone like Hanks on board, you are going to take full advantage of that monstrous talent; but the film occasionally focuses on him a little too much and lets more interesting things fall to the wayside. Make no mistake though, Hanks delivers a killer performance like he always does. Playing against a dog and a CGI robot as your co-star isn’t easy, but his performance does nothing short of completely immersing you in this world and makes you feel like you could reach out and touch the robot yourself.

Sadly, in the writing, Hanks’ character Finch is a confused one. Early on, the movie establishes him as an outcast who seems to have found a kind of comfort in the isolation brought on by the apocalypse. It’s an interesting idea, as typically people portrayed in isolation are attacked by the sense of loneliness. The problem arises when the film piles on more and more drama and conflict within Finch that only serves to distract from the core parts of the character that work. 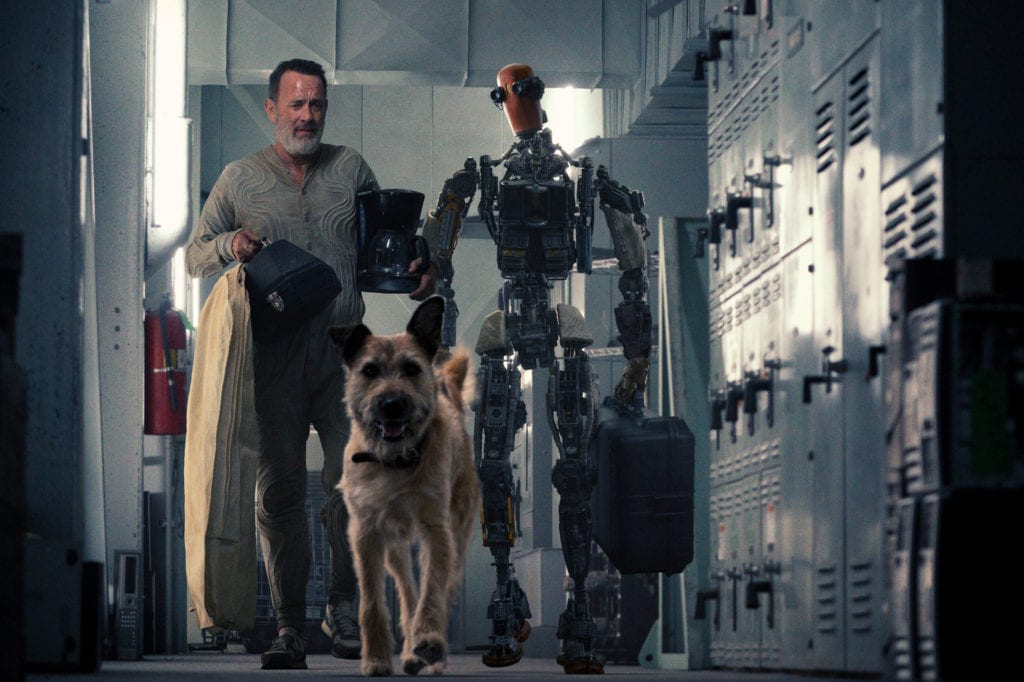 There are some pros and cons of having such a small cast. A con is that with so few people involved, there is very little margin for error; if one of your actors doesn’t work, then your whole film collapses. The good news is that Finch has successfully turned that weakness into a strength with Caleb Landry-Jones’ turn as the robot, Jeff.

Jones gives one of the most incredible voice acting performances that I’ve ever heard. Jeff alone is the best reason to watch this entire movie. When Jeff first begins speaking, it’s kind of glitchy and stutter-y, like if a child came out of the womb with the ability to talk, but the inability to form a sentence. What I didn’t realize until closer to the end, was that throughout the run time he was slowly getting more and more comfortable with his words. It’s so subtle that I almost didn’t notice it, but once I did I couldn’t help but be in awe.

Given that I only know Jones as the “creepy guy from Us and Twin Peaks: The Return,” it was unexpected for him to be so comfortable and relatable. He slips into that role with ease, and his voice perfectly reflects that of something custom built to care for a dog, just as Jeff is. Sadly, I couldn’t find much information on who played the real star of the film, the dog Goodyear, but the puppy deserves a nod for the best supporting actor.

I briefly touched on the off-kilter development of Finch, and sadly that’s a recurring issue with the film as a whole. The movie starts with a pretty simple mission statement and little seeds of conflict; Finch, Goodyear, and Jeff (along with their robot sidekick Dewey) must make their way to San Francisco to avoid a dangerous storm. But, Finch struggles with trust and must learn to overcome his own issues to achieve his goal.

It’s simple, and almost perfectly so. I think that alone could work well as a 90-minute story about companionship and trust. But for some reason, there are 30 extra minutes of content here that does nothing but add under-developed ideas and unnecessarily bum out the audience, almost teetering on emotional torture with the likes of Her and Interstellar.

Finch is good, and I feel confident in saying that. But just like the titular character, the film is rather confused and unfocused. You can tell that the writers went out of their way to take care and channel their passion into this story, but as plenty of filmmakers over the years have said, a critical part of filmmaking is knowing when to cut something; and there’s a lot of this movie that I think can be cut.

My rating for Finch: