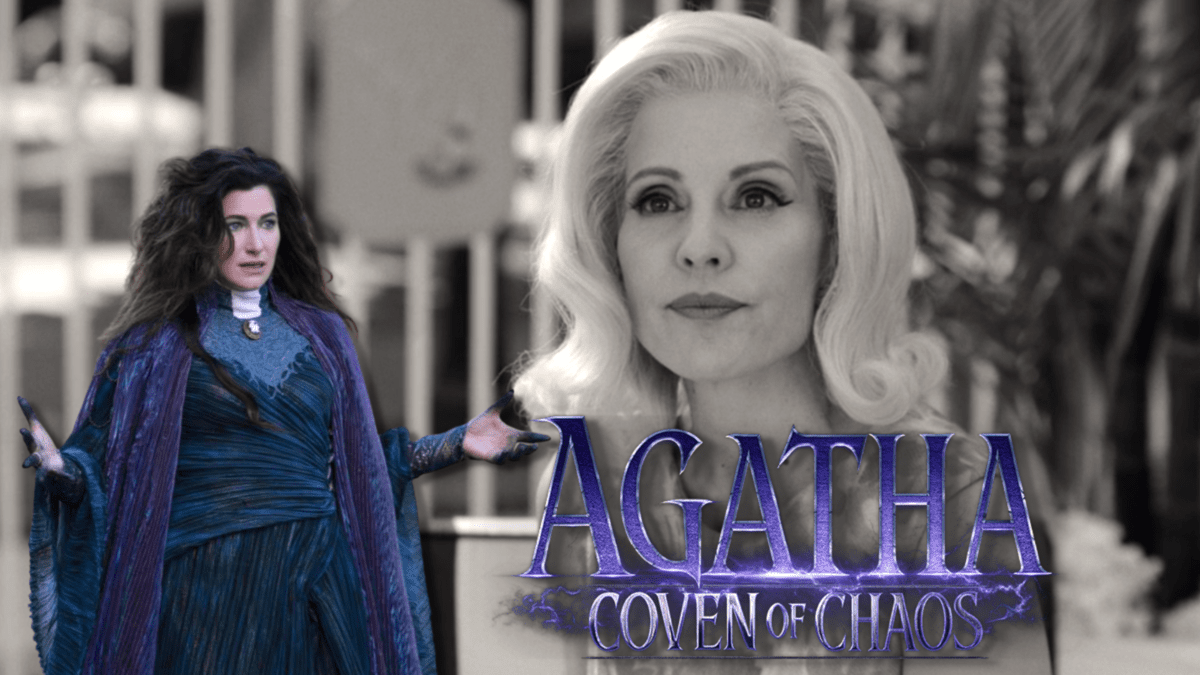 Kathryn Hahn’s Agatha Harkness was a standout antagonist in our first Marvel Studios Disney+ original series, WandaVision. Now, as a result of her breakout popularity (and Hahn’s stellar performance), Agatha is getting her own Disney+ spin-off Agatha: Coven of Chaos!

We don’t know much about Agatha: Coven of Chaos beyond its snappy title. Jac Schaeffer, WandaVision’s creator, will be heading up the series as part of an overall deal with Disney+. The show is described as a “dark comedy” and Marvel.com simply states that Agatha “will reveal more about the character first introduced in Marvel Studios’ WandaVision”.

The series is poised to debut in late 2023 (hopefully in time for Halloween!) with several WandaVision writers joining the production.

A big piece of news for Agatha broke earlier this week: Emma Caulfield Ford is officially reprising her role as Sarah Proctor / Dottie Jones in Coven of Chaos and at least one other MCU project! With a return to Agatha in Westview specifically pretty much confirmed by Dottie’s presence, let’s examine what Agatha may have in store for us next year.

With the series’ “dark comedy” classification and Dottie/Sarah returning, the obvious (and possibly boring) choice would be to do an Agatha character study through her time in Westview. In Westview, Agatha remains trapped in her own mind as “Agnes”, presumably unable to use her magic and trapped in some kind of sitcom hell (or heaven, if your name is Wanda).

The present-day comedy setting could be intercut with flashbacks from Agatha’s life, revealing what she’s been up to since the 1700s. Through these flashbacks, the series could delve deeper into the magic side of the MCU – especially after Doctor Strange in the Multiverse of Madness failed to even specify the difference between witches and sorcerers. The name “Coven of Chaos” suggests the inclusion of several other witches who could appear in flashbacks or the present day.

I’d love to see Agatha form her own relationships with the Westview residents, especially after Kathryn Hahn’s comments on her time in the town. Hahn said that Agatha chose to linger in Westview because she “started having a good time” and this was the first time in centuries she was able to forge relationships with people. That aspect of her character wasn’t examined in WandaVision, but if Agatha is still in Westview, it would be pretty interesting to see that side of her.

However, this would basically make it another WandaVision (or should that be AgathaVision?), which is why I doubt it’s the route that Marvel Studios is taking. Other witches coming to confront Agatha while revealing the secrets of her past would be too similar to Agatha’s own tussle with Wanda.

Splitting time between present-day Westview and the past 330 years of Agatha’s life might work, but it’s not the most unique way to learn more about her. Despite the similarities, Sarah/Dottie’s inclusion seems to hint at this direction. After all, according to our knowledge, she’s just a simple Westview resident… or is she?

Who is Sarah Proctor?

We’ve got a lot of unanswered questions (and frustrations) from WandaVision, from the Ralph Bohner fakeout to Jimmy Woo’s missing person. That’s one reason I find the finale a bit sloppy – there’s no reason to draw things out to such a degree and make people guess about everything. Most of WandaVision’s teases and misdirections were fun (like Dottie) but others were annoying because they stretched out too long (Ralph).

In WandaVision, Dottie was created specifically to be a red herring. She served her purpose in the second episode: getting us to speculate about every line she spoke. The show kept us guessing about when she would return – only to reveal that she was nobody special in the finale. But was that another of WandaVision’s many misdirects?

Many fans theorized that Dottie was a witch, maybe even Agatha’s daughter, Abigail Harkness. But while those theories didn’t come to fruition in WandaVision, they could come into play in Coven of Chaos. In the WandaVision finale’s credits, Emma Caulfield Ford is listed as “Sarah Proctor” – apparently Dottie’s real name. What’s interesting about that is that Sarah Proctor was a real woman with close ties to the actual Salem Witch Trials.

Elizabeth and John Proctor were both convicted of witchcraft in 1692, with their daughter Sarah accused as well. After the finale, I joked that this was proof of Dottie being a witch the whole time. I didn’t actually believe that, though. I thought it was simply a historical reference to the Salem Witch Trials because Agatha was a Salem witch. Now, I’m thinking I may have been onto something.

Could Agatha and Dottie have been conspiring against Wanda? Maybe Dottie’s just a fantastic actress, taking the role of the haughty neighbor while Agatha became the friendly neighbor. We never did get an explanation for her questioning Wanda in the second episode. We’re made to assume it was Agatha’s doing because of the other situations she controlled, but Dottie wasn’t shown once in the Agatha All Along sequence.

When Agatha “frees” Sarah and confronts Wanda in the finale, Wanda says Agatha is making her say these terrible things. The other townspeople being freed and angrily staring Wanda down as she leaves Westview “proves” that Agatha wasn’t controlling them – but what if Sarah was another misdirect? What if all the other Westview residents were actually released from Wanda’s mind control, but Sarah was putting on a show because she was never under it? Agatha faked it herself in the Halloween episode – and that was with Vision, someone she wasn’t working with, “freeing” her. If Agatha could fake that, Sarah could fake anything we saw Dottie do in WandaVision.

When she confronted Wanda, Sarah begged Wanda to let her child out of her room… but if she has a daughter, where was she in the Halloween episode? Every other Westview child was out and about that night, but we didn’t see a glimpse of Dottie. She could’ve been working with Agatha the whole time, keeping herself hidden even when Agatha revealed her true nature. This could’ve been a last-ditch attempt to keep manipulating Wanda and insurance in case Wanda defeated her. Agatha didn’t know what Wanda was, so having a backup in the form of Westview’s queen bee does make sense.

However, Agatha seems like a pretty lone wolf. She killed her original coven and Kathryn Hahn’s comments make it clear that Agatha lived a lonely life. She’s clearly getting some friends in Coven of Chaos based on the title alone, but what about the show’s original name? How does the House of Harkness factor into the MCU? Rumors have suggested that Coven of Chaos features a powerhouse cast of comedy actresses. These cast members could hint at Agatha’s wider implications, but you’ll have to stay tuned for that!

Marvel seems to have a plan for every character and Agatha is no different. Remember, Kathryn Hahn’s post-WandaVision deal covers appearances in multiple Marvel Studios Disney+ series and theatrical films. She could easily pop up in future projects and is already rumored to appear in a Disney+ series before her own. I can easily see her making the jump to MCU movies and I’m honestly very surprised she hasn’t already. I definitely expected to see Agatha in an end-credits scene for Doctor Strange in the Multiverse of Madness.

I’m quite excited about Agatha Coven of Chaos. I think it’s going to enrich the magical corner of the MCU on a grand scale and surprise people who think it’s unnecessary. With Emmy-nominated writers, hilarious comedic actresses, and Jac Schaeffer at the helm, Agatha could be the most exciting Disney+ show since WandaVision started it all. We know Marvel Studios likes their streaming shows to make an impact, with big changes for the world and/or upcoming MCU projects. Maybe Dottie is actually Mephisto… after all, the devil’s in the details! What are your thoughts? Are you excited to see Emma Caulfield Ford return to the MCU? Are you ready for a return to Westview? Let us know on social media!